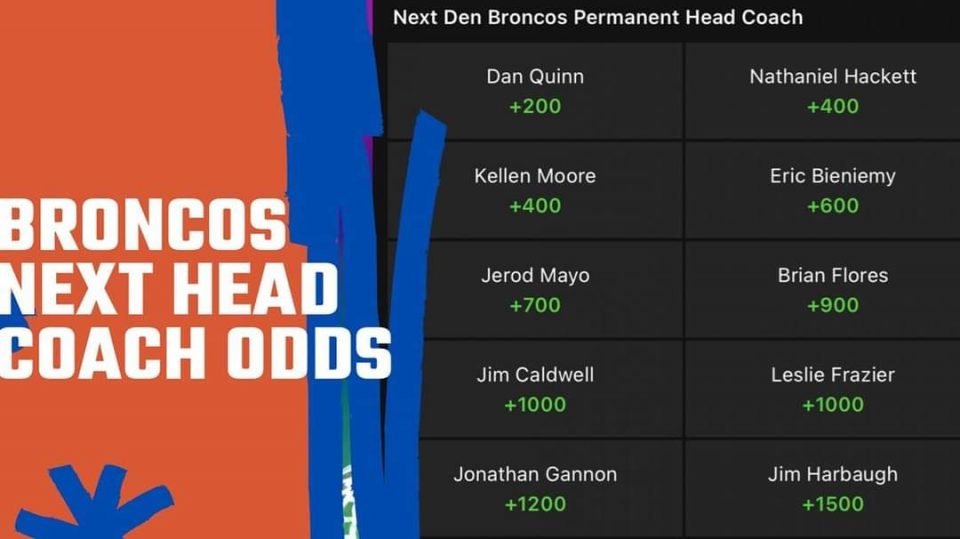 Following the firing of former Head Coach Vic Fangio, along with OC Pat Shurmur and Special Teams Coordinator Tom McMahon, the Denver Broncos have already started putting list of possible candidates to take over as the new Head Coach. The first reported coach the Broncos have asked permission to interview was Jarod Mayo, the New England Patriots Inside Linebackers and co-Defensive Coordinator. That started off a snowball of coaches they have asked permission to interview, adding up to a most recently reported 10 coaches.

This is going to be one of the more fascinating Head Coaching searches in franchise history. Obviously most if not all fans are clamoring for an innovative, fun offensive minded coach. That goes with the historic trend of success for the team. The team has played in eight Super Bowls, and seven of the times they’ve played in the big game they were coached by an offensive minded coach. The most recent trend of failure for this team supports that wish for fans. The Broncos are currently in one of the worst stretches in franchise history, missing the playoffs six straight years and five straight losing seasons. All five of the losing seasons, the head coaches were defensive minded.

However, in George Paton’s press conference about the head coaching vacancy, one of the qualities he is heavily looking for in a new coach is leadership. He seems to want a coach that not only demands leadership from the players and assistant coaches but instills leadership from himself s well. A quality like that almost eliminates young, would be first time Head Coaches. That, plus the fact that in his most recent stop, he found some success in Minnesota with a veteran Defensive minded Head Coach in Mike Zimmer. So, I would not say it is a slam dunk that the team will hire an offensive minded coach.

Currently based on reports and some sportsbooks, the favorite for the position is Dan Quinn, the current Dallas Cowboys Defensive Coordinator. He checks a lot of boxes. He is clearly a good leader and developer of talent, especially on the defensive side of the ball. He also was a Head Coach before and had success at that stop. I would also say that coaches like Doug Pederson and Brian Flores fit those criteria as well. My advice for Broncos fans is to not bet everything they have and only have their hearts set on a young, offensive minded guy.

I was able to find two different sports books with different odds and favorites for the Head Coaching Position. So below I will post the 10 favorites from both sources.

This is always a tough thing to bet on because no one has any idea what George Paton is really looking for in a new Head Coach, and I can guarantee he does not care what the fans want at Head Coach. Given what he said in his press conference, I would bet on the older former Head Coaches on this list.

If I had to bet money right now, I would put it on Dan Quinn. While he is not who I would hire, he fits everything I believe Patton is looking for in a head coach. He has past experience at the position, has success at that position, a player favorite everywhere he goes, he demands the best of everyone involved in the team, and most importantly he has a past relationship with Paton. It also helps that he turned on of the worst defenses in league history, to a dominate defense a year later.

My pick if I was the GM would be Doug Pederson. He has all of the things Dan Quinn has, except Pederson won his Super Bowl. Unfortunately, he does not have a past relationship with Patton, which could be key in the decision in a league like this. I like Pederson personally for a number of reasons. He’s been a successful coach in this league, and I feel like this roster needs an adult at the coaching position and we don’t need to deal with rookie head coaching mistakes that happen with all of them. He also won a Super Bowl with an average QB, looking like an MVP, in Carson Wentz, and a now third string QB in Nick Foles. Another thing I think is sneakily big is I think a hire like him attracts a veteran star like Russell Wilson, Aaron Rodgers, or Deshaun Watson more than a rookie head coach would.

Another good one to bet on even though his name doesn’t have any odds yet is Brian Flores. He was a surprising fire from Miami and has everything Paton is looking for. He was able to have back-to-back winning seasons with Ryan Fitzpatrick and Tua Tagovailoa at QB. That alone makes him attractive to teams who have had recent years of struggle at QB like the Denver Broncos. He should be one of the first names to be hired somewhere, and I wouldn’t be surprised if it was with Denver.

My dark horse candidate, even though he is a betting favorite by one source, is Nathaniel Hackett. If Denver wants to follow the trend in the NFL with going young and offensive minded at Head Coach, he is my favorite of those types of coaches. He has been in a great system learning from Matt LeFleur, plus if the Broncos are going to try and land a Star QB via trade, hiring Hackett could entice Rodgers to want to come here. That and there are rumors that the Broncos could hire Hackett, trade for Rodgers, and sign Devante Adams. That could be a game changing off-season and I would not be surprised if Paton looks at the trend in the league and decides to follow what is working.

If you are looking for more information on favorites from a journalism side of things and not so much a betting side, below will be a link to DNVR’s YouTube page and a video on their opinions on some coaches.

Odds for Surprising Playoff Match-up in Raiders vs Bengals