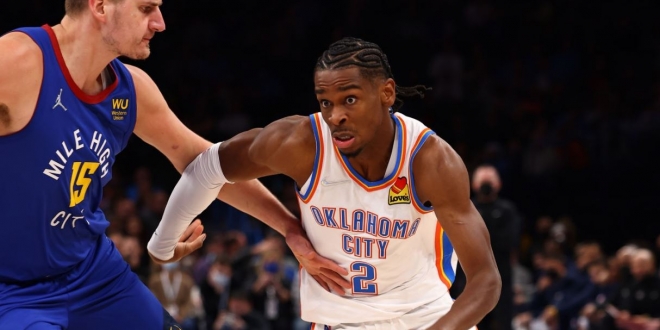 The Denver Nuggets got back in the win column on Friday night against the Sacramento Kings. Now they will look to make it two in a row against the Thunder in Oklahoma City tonight. The tip-off is at 5 p.m. MST.

In the earlier meeting between these two teams, Denver ended up losing by 14 points to a score of 108-94. Shai Gilgeous-Alexander notching a triple-double in OKC. It was an impressive day for the young point guard and a rough one for the reigning MVP Nikola Jokic who only scored 13 points in 25 minutes. Even worse, those 13 points were enough to be Denver’s leading scorer on the night.

The first bet to keep your on is Gilgeous-Alexander to go over 22.5 points tonight. In his last 10 games he has managed just over 24 points per game and put up 27 against Denver in their first meeting. In those 10 games, he has hit the over on seven occasions. Most notably he had 29 points against Phoenix. In the last two games, he has not managed the over, but look for him to have a bounce-back game against Denver who gives up over 23 ppg to opposing point guards.

Another option tonight would be the Nuggets -6.5. Normally it’s not wise to take the Nuggets spread bigger than four or five. Tonight however the Thunder are facing off against Denver without one or possibly two of their primary frontcourt defenders. Denver is 7-2 ATS in their last nine meeting in Oklahoma City. They are 13-3 in their last 16 meetings altogether. Denver continues to get players back from injury & illness. Bones Hyland has recently come back into the fold which has provided a nice boost along with Zeke Nnaji, Monte Morris, Jeff Green and head coach Michael Malone.

One of the primary reasons Denver struggled in that game against OKC last time was the disruptive presence of Derrick Favors against Jokic. Favors has played well over his career against Jokic. The Nuggets center has only managed to put up 16.7 ppg in 18 contests against Favors. Let’s not forget, this was also the game where Malone benched all starters for the fourth quarter while the game was still in reach in pure frustration with the lack of effort all around from the team.

The Thunder are coming off three straight losses, including the most recent being a blowout against the Minnesota Timberwolves. It’s going to be hard to hold the MVP back twice and Denver covers on the road.