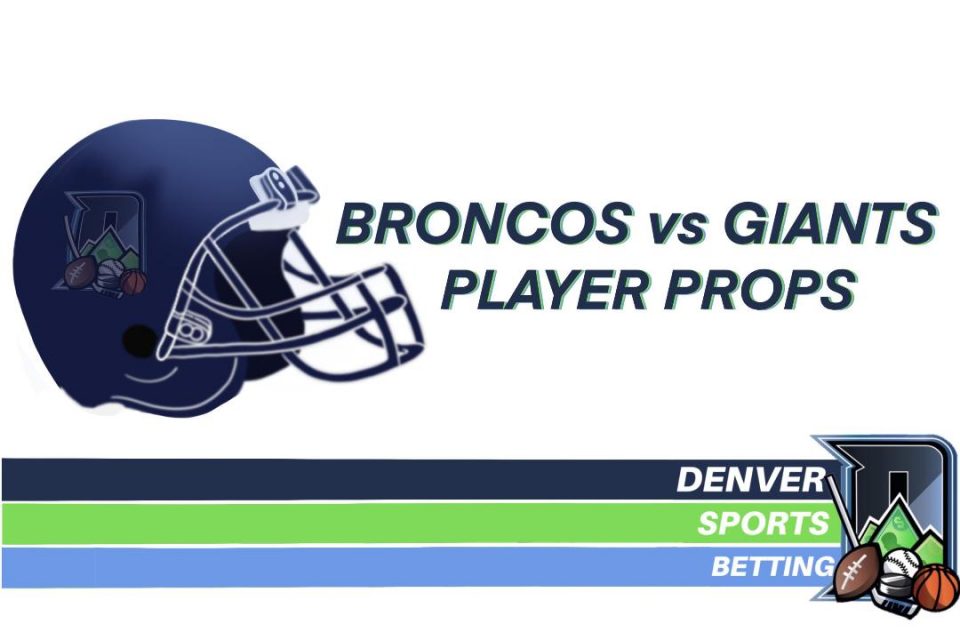 Sports betting moves quickly. New information and injury updates are constantly impacting the way you should consider wagering. Nowhere is that more prevalent than in the NFL. Before taking a chance on any bet look for updated information. Scan injury reports, both for missing and returning players. Even weather reports can make a big difference. This time of year can make significant impacts on games. When it comes to Player Prop Bets consider the match up and recent performance of each player.

Sports betting is legal in Colorado and it’s time for sports fans to get in on the action! With that, we want to ensure Colorado bettors are educated before laying their money on the line, so be sure to check out DenverSportsBetting.com for daily news, trends, and analysis of sports from a betting perspective by Colorado’s premier sports betting centric media outlet. Use your instincts, keep your eyes and ears open. Trust your gut, but most importantly have fun.  Here are a few of the Prop Bets to consider for the Denver Broncos at New York Giants game.

Broncos at Giants – As Denver fans anxiously wait for the start of new season with playoff aspirations in mind; the Broncos kick off the season vs the Giants in the lowest implied point total of the Week 1 NFL schedule. A game total set at 41.5 points suggests a sloppy offensive output with a defensive field position battle. Denver is currently favored on the road by -3. Based on the implied team totals and matchups, here are some player prop bets to consider.

Teddy Bridgewater and Jeudy appeared to be on the same page throughout the preseason. Bridgewater will always be knocked as a ‘Checkdown Charlie’ type of QB; but this doesn’t hurt Jeudy’s potential in the short term. Jeudy is a run after the catch playmaker. It is easy to see multiple scenarios where Jeudy is peppered with short passes. In the last nine games of 2020, Jeudy had seven or more targets. Combine this with Bridgewater’s short passing accuracy, 4.5 receptions is shortchanging Jeudy in Week 1.

The -140-price tag is steep for this prop but we like winners. Despite the hype surrounding rookie running back Javonte Williams, Melvin Gordon is still the bell cow back of this offense. Vic Fangio is an old school coach and barring injury, it is doubtful Williams would eat into a huge portion of Gordon’s carries in the opener. Based on the implied game total and defensive battle, Gordon should carry closer to 20 times in this game. If you aren’t in love with the -140, consider a parlay with another Gordon Prop Over 10.5 receiving yards (-105)

When you think about Denver, the first thing that should come to mind is pass rush and the abundance of talent in the secondary. In 2020 Giants had one of the worst offensive lines in the league and they haven’t done much to improve it. That doesn’t bode well again for Daniel Jones who is going to be running for his life in stretches of this game. Jones running for more than 21 yards is a strong bet to consider.

As previously mentioned, this game is scripted to be a slower paced defensive battle. Fangio doesn’t coach to win but rather he coaches to not lose. If Denver builds any sort of lead, they’ll play field position and lean on the run game. There’s no way Fangio will want Bridgewater eclipsing 33 pass attempts. This is one of the stronger bets to consider in this opening week matchup.