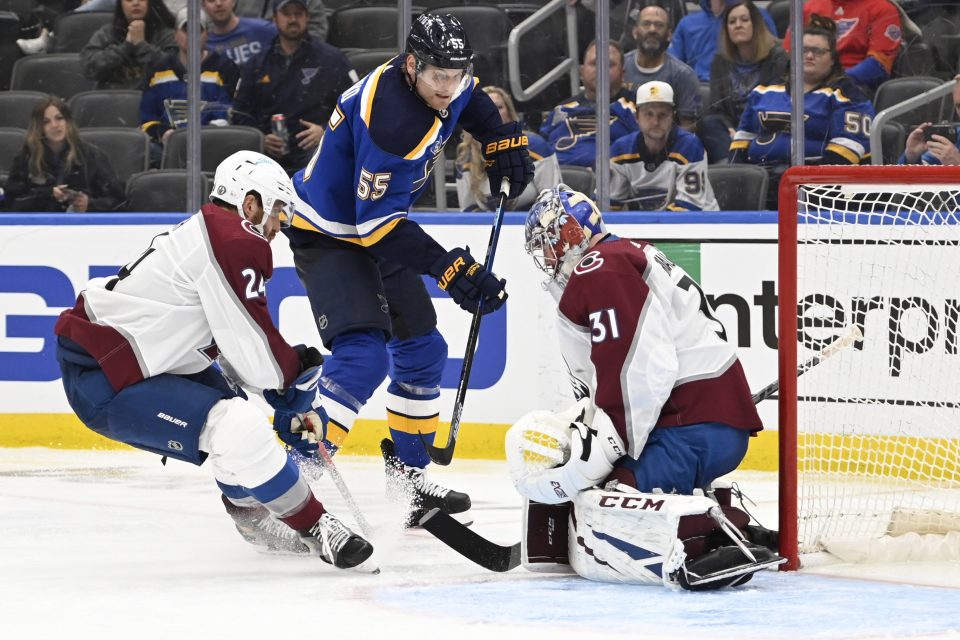 The Colorado Avalanche are looking to wrap up their first-round series with the St. Louis Blues as they get set to take them on Sunday. The Avs are up 3-0 on the series and coming off of an impressive 5-1 victory Friday night.

The Blues will most likely not have Justin Faulk, Robert Bortuzzo, and David Perron in the line once more for injuries and covid protocol. The Avs will once again be without Nazim Kadri as he serves the second game of his eight-game suspension for his hit on Justin Faulk.

The Avs are up 3-0 in the series and have outscored the Blues 15-5 in the three games already played. They’ve hit their (1.5) puck line every game so far and with Philipp Grubauer having a 1.67 GAA so far in these playoffs, the Avs have become a hard team to beat. Last game it wasn’t the Avs top-line guys like MacKinnon, Landeskog and Rantanen having their way with the Blues, instead, the Avs found goals from all over, including one from their rookie center Alex Newhook. The Avs look to sweep the series. Avs PL +115

The Blues Jordan Binnington hasn’t been great in these playoffs so far and that’s a big reason why they’ve found themselves down 3-0. He’s given up 11 goals in three games there will be desperation from the Blues to avoid the sweep today and that could expose themselves defensively to a speedy Avs counter-attack. Over 5.5 goals -120

Mikko Rantanen hit the post twice last game and found himself in the right place serval times. He’s desperately close to a goal in these playoffs missing serval wide-open opportunities. The opportunities will continue to roll his way when you consider his line-mates as well. He finally looks to score his first 2021 NHL playoff goal today. Rantanen goal +114

Captain Gabe Landeskog has quietly got six points in the three games he’s played and although he (only) had a point last game he still finds a way to impact the game in many ways. He’s playing at a high level as the leader of the Avs and setting the tone for their ultimate Stanley Cup goal this year. Landeskog +2 points +195

The Avs are looking for their first sweep in the playoff since their 2001 cup run and look to finish things up in St. Louis instead of having to come back home. Puck drop is 3 pm MT today.