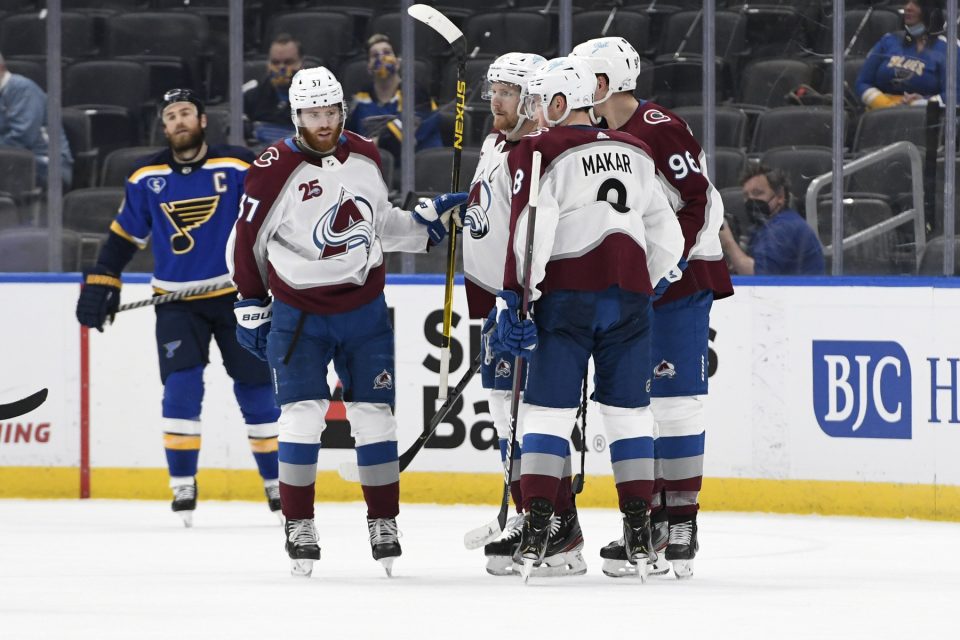 The break is over for the Colorado Avalanche as they get set to take on the St. Louis Blues Thursday night after having an entire week off due to Covid protocol. The Avs had goaltender Philipp Grubauer and rookie Bowen Byram test positive back on April 14th initially giving way to their postponement of the Avs vs Los Angeles Kings series.  Forward Joonas Donskoi later joined the Covid list making it three players as the Avs were forced to miss a week of games. Mikko Rantanen has joined that list although he is not expected to miss the full amount (14 days) of the covid protocol as he was only deemed “in close contact” and is expected to hang back on the Avs road trip to St. Louis.

The last game the Avs played was against the Blues as the newly acquired Devan Dubnyk, long time Minnesota Wild rival goaltender, made his debut in the burgundy and blue. The Avs walked away with the 4-3 victory backed by the .914 save percentage from Dubnyk.

This will be the sixth game between these two clubs as the Avs hold the edge, winning four of them.

The St. Louis Blues are 3-6-1 in their last 10 and lost to the Avs last time these teams met, coupled with the fact the Avs are 4-0 in the last four games against the Blues and the Avs are a smart play. Something about the long break disrupting the momentum has me uneasy, something about no Grubauer, Donskoi and no Mikko also has me weary. The Blues are sitting just behind the Arizona Coyotes for the last playoff spot and will have to claw their way into the playoffs this year, they have more at stake for this game. Grab the value.  Blues ML +116

The over/under is 3-7 in the last 10 games for the Blues, the under is also 4-1-1 in the last 6 home games for them. With the lack of players, the Avs have two of their top five goal scores out for this road trip as well. Like the under here. Under 6 goals -118

It’s hard to say how the Avs lines will be shifted around given the absence of some of their Covid protocol players, but Gabriel Landeskog has the second most power play goals on the Avs with eight and the St. Louis Blues have a bad penalty kill, 27th in the NHL to be exact. In the absence of Rantanen like the Avs captain to step up. Landeskog goal +215

David Perron has 119 shots this year which is 24 higher than the next guy on the Blues, who happens to be Ryan O’Reilly. He’s steadily produced a point in the last five games he’s played but no goals to show for. In fact, the last time he’s scored was against the Avs on April 2nd. He’s involved in the attack, he’s due to get his. Perron goal +220

Both teams are on their final stretch of the regular season as they get set for puck drop Thursday night at 6 p.m. MT.

Anthony ‘Lionheart’ Smith joins The MMA Plug ahead of UFC 261!