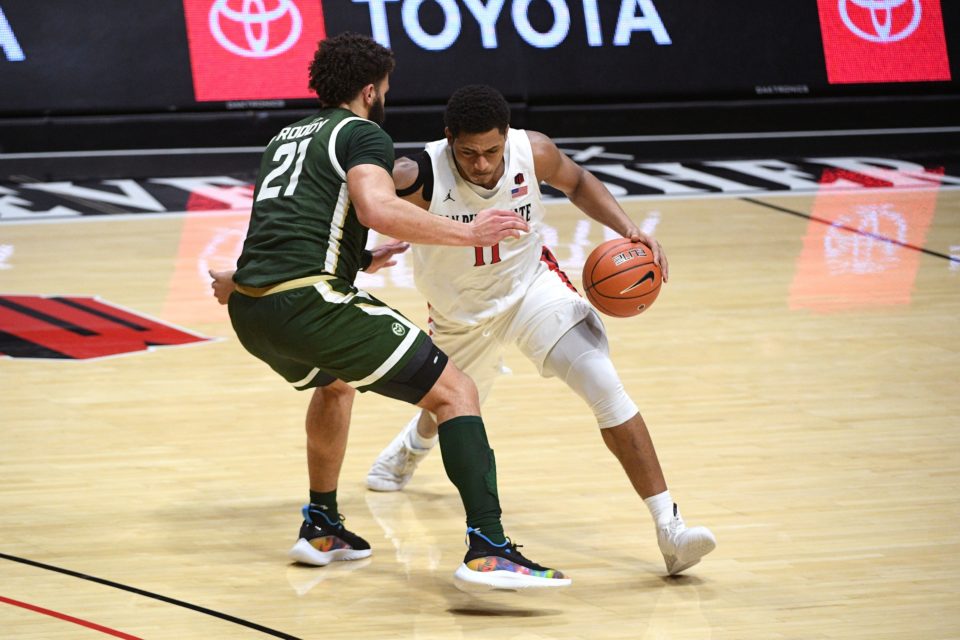 Let the Madness begin….. Finally, March Madness has come back to the world. The Mountain West Basketball Tournament begins today and there’s only one question to ask? Can anyone stop the San Diego State Aztecs from breezing to the title? Denver Sports Betting is here to let you know which teams are pretenders and which teams are going to be potentially able to upset the odds on favorite.

Truth be told I think the Aztecs walk to the title with ease. I would say there are 4 legit teams that could win this tournament and 1 potential Cinderella story. In no particular order, the teams to watch (besides San Diego State) are Boise State, Colorado State, Utah State and Nevada. This conference is defense-oriented, and for lack of a better term blue-collar. There are a bunch of hard-working teams and gritty players. I anticipate more than a few nail-biters during this tourney.

The Aztecs are currently the No. 19 team in the nation and are ranked ninth in the nation in defensive efficiency. The Aztecs are the No. 1 seed for the 2nd consecutive year and are riding an 11-game win streak. Poised to be at worst a 7 or 8 seed in the Big Dance, the Aztecs have the makings of a team ready for a deep run in Indy. The Aztecs have a distinct height advantage against all teams in the conference and based on their defensive rating they will have to fall flat on their face to be upset in Vegas.

The Aggies are the definition of a defense-first team. Calling this team a bunch of gritty competitors might be selling this team short.  While looking for a 3-peat for Mountain West titles, the Aggies need a good showing in Vegas to make the Big Dance. The Aggies should have plenty of confidence in any match-up, considering they swept the Aztecs and have won six of their last eight games. I think the only thing that could derail the Aggies tourney chances is their own offense struggling to keep pace with hot shooting teams.

The Broncos are one of two teams in the Mountain West (CSU) that rank evenly in offensive and defensive efficiency. Heading into Vegas the Broncos are a bubble team and they know it. They have to do well or potentially win the Mountain West just to have a chance at the Big Dance. The Broncos face off in round two of the tourney against a tough Nevada team. I think the winner of that game has the best chance to upset the Aztecs.

The Rams head to Vegas with the hopes and dreams of all Colorado basketball fans squarely on their shoulders…Just kidding Buffs fans. All jokes aside the Rams need to perform well in Vegas in order to be dancing in Indy. The Rams are on the bubble and an early exit in Vegas could derail their season. The Rams have the conference’s best inside-out duo in Isaiah Stevens and first-team All-Mountain West player David Roddy. If the Rams get their offensive mojo rolling and avoid foul trouble to their core players, they have more than a puncher’s chance of making a run for the tournament crown in Vegas.

To quickly summarize the Wolf Pack’s credentials; they swept Boise State and pulled off a win against CSU ending their five-game winning streak. The Wolf Pack have arguably the best guard in the conference in Grant Sherfield and have the potential to be an offensive juggernaut if their array of quality shooters get hot. As previously stated I think the round two winner of Nevada-Boise State has the best chance to upset San Diego State.

Straight from Vegas, the race for the Mountain West starts with a three-game set.

The safe bet is to take San Diego State or Utah State to win the tourney. If you’re a gambler think big and consider the Nevada Wolf Pack who are basically playing at home or the CSU Rams. Good luck and enjoy the beginning of the Madness.