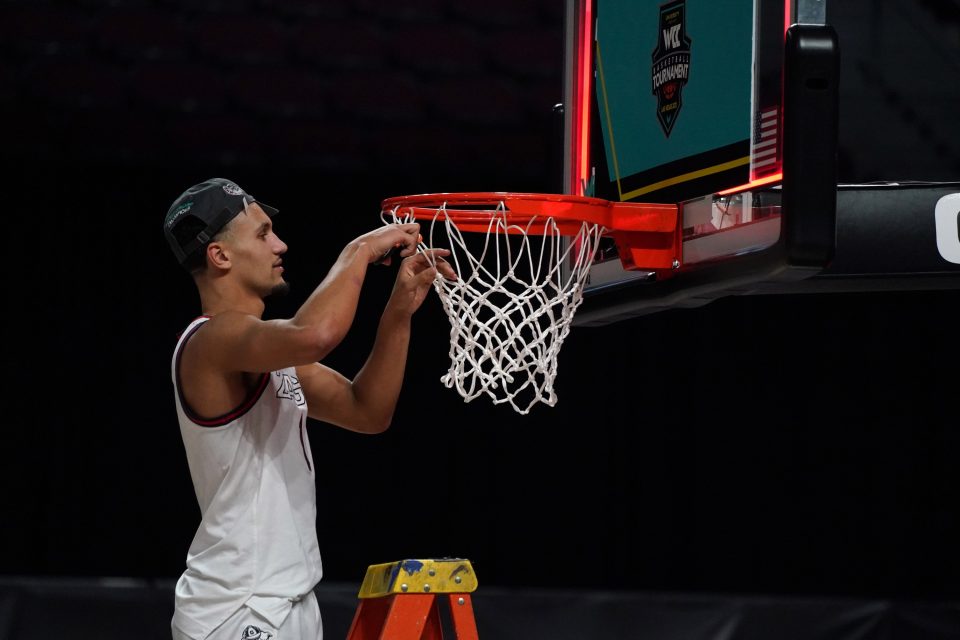 After a year without the madness, we’re back! MARCH is here and the NCAA men’s basketball tournament is upon us with the brackets set and the upsets ready to take center stage, all in the state of Indiana, where the entire tournament will be played.

One of the most intriguing regions of the bracket is the West, as it features No. 1 overall seed Gonzaga, who will be looking to win its first national championship in program history. The Zags were in the championship game back in 2017, losing to a Joel Berry-led North Carolina, 71-65.

The Bulldogs are led by senior Corey Kispert and sophomore Drew Timme, while also bringing to the floor projected lottery pick, Jalen Suggs.

In the first round Saturday night, Gonzaga will face the winner of the play-in-game between Norfolk State and Appalachian State at 7:20 p.m. MST. I may be stating the obvious here — in fact — that’s exactly what I’m doing, don’t fade Gonzaga in the first round, it’s an easy way to lose money quickly.

So, outside of the Bulldogs, let’s look in-depth at my two favorite first-round picks in the West Region.

UC Santa Barbara are an interesting team. The Gauchos have won nine of their last 10 games and bring a balanced offensive attack to the floor. To get the automatic bid, Santa Barbara defeated conference power UC Irvine, 79-63.

Led by JaQuori McLaughlin (16.2 ppg), UC Santa Barbara has three players scoring in double figures this season. The senior guard is accompanied by junior forward Amadou Sow (13.7 ppg) and sophomore guard Ajare Sanni (11.2 ppg). McLaughlin is going to be the key for the Gauchos if they hope to upset a solid yet inconsistent Blue Jays squad that just got embarrassed in the Big East Final by Georgetown, 73-48.

A key injury coming into this game is the ankle injury that sixth man of the year Sanni suffered in the championship game against UC Irvine. If Sanni can’t go, that is undoubtedly a big hit against a more talented Creighton team. While true, if that is the case, keep an eye on Temple transfer Josh Pierre-Louis, who had a season-high 24 points on 9-for-10 shooting in the quarterfinal win against Long Beach State.

Where the Blue Jays really worry me is at the free throw line. In a game that I see going down to the wire, you’re betting on the 329th ranked free throw shooting team in Creighton at 64.2%, the second-worst percentage of any team in the tournament field next to Rutgers. Meanwhile, UC Santa Barbara ranks 32nd in the country in field goal percentage at 76.3&, including a 90% shooter from the foul line in senior starting guard Devearl Ramsey.

I think this game is going to be one of the best games of the first round and I can’t help but fade the inconsistent play and the lack of ability to knock down free throws from the line of the Blue Jays.

When the Cavaliers and Bobcats take the floor, it’s a battle of opposing styles of play. Virginia is the slowest-paced team in the country while Ohio runs the floor often. The Bobcats are led by Jason Preston, one of the premier scorers the tournament has to offer at 23 points per game this year.

The winner of this game will face the winner of the game mentioned above, Creighton and UC Santa Barbara. While these two games are intriguing, both have Gonzaga looming in the Sweet 16, barring some unforeseen circumstances.

The Cavaliers are led by Marquette transfer Sam Hauser, who has a team-leading 16 points per game. Senior forward Jay Huff (13.1 ppg) and junior guard Trey Murphy III (11.3 ppg) follow Hauser in the scoring column. It isn’t the offensive categories where Virginia makes their statement, it’s the defensive end of the floor. The Cavaliers allow just 60 points per game.

It’s clear that Ohio has the offensive firepower to pull off this upset, will it be able to beat the elite Virginia defense manufactured by defensive wiz Tony Bennett is another question.

Ohio is a popular upset pick in brackets and also on the spread and money line in the sports betting market.

For me though, I’ll take the defensive ability of Virginia to slow down Ohio enough to cover the spread, winning the game by 12+ points.

Here are all of my picks in the first round of the West Region for lines that are out as of Tuesday:

Sweet 16 Picks in the West Region:

Elite 8 Picks in the West Region: