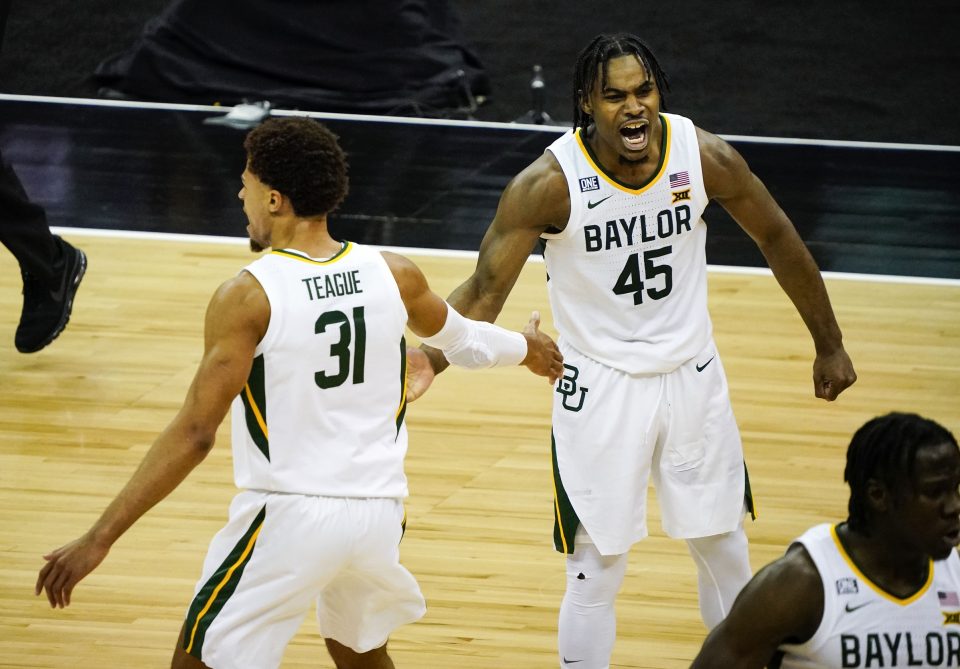 Finally…the Madness has come back… To March! Here we go team DSB the madness is ready to begin; the bracket is set, the games are scheduled. All we need now is some cold drinks and some educated guesses to throw some dollars at all these Cinderellas.

As the Big Dance begins we all hope to get lucky on a long shot before the clock strikes midnight. Don’t get left out in the cold; there are plenty of good looking teams to hitch your wagon to. Everyone has different tastes when it comes to sizing up their darling of the dance. There’s something for everyone in this tournament. Let’s get started by checking out what the South Region has to offer.

For both betting and bracket purposes, these are the teams that I think could win the South region.

Shocker, the No. 1 seed is good. Baylor is absolutely a Final Four and National Champion contender. However, there’s little debate that Baylor has by far the toughest road to the Final Four. Baylor led the nation in 3-point percentage (41.8%) and was a top five team in both offensive efficiency and effective field goal percentage. The Bears are led by the Big 12 Player of the Year (Jared Butler) and Big 12 Defensive Player of the Year (Davion Mitchell) both of whom will be NBA first-round picks. Yes, Baylor has a tough road but if they get on a roll, don’t expect them to be stopped easily.

Depth with a lot of scoring threats is how I would describe Ohio State. Following a tough 4-game losing stretch in late February, the Buckeyes are streaking at the optimal time. Having a top 10 ranked offense combined with elite depth, the Buckeyes are going to be a tough out. The only major issue I see with Ohio State may be their coach’s experience. Head coach Chris Holtmann is 6-5 in the NCAA Tournament; only getting to the 2nd once and that was with another school. Ohio State definitely has the talent to make some noise but inexperience could be a factor to consider.

Arkansas should be on your radar as a team poised to make a run. Going undefeated in league play during February and March (12 games), this Razorback team has more than a puncher’s chance to be dangerous in this region. Arkansas is a top 40 offense and a top 20 defensive team that is led by journeyman role players. That equals experience and grit. Superstar freshman (SEC Freshman of the Year) Moses Moody has been on fire scoring 28 points in three of the last four contests. Arkansas has coaching, experienced players, solid defense and capable scoring threats. This team is going to be tough to beat.

The Red Raiders have a bad draw in the opening round against Utah State. Height could be a factor in round one. However, the Red Raiders are an underrated sleeper in my opinion. Texas Tech came up short in a lot of big games this season. One point losses to Texas, Kansas and West Virginia and pushed Oklahoma State to overtime twice. This is a sneaky good team that could catch some teams by surprise. Led by two big-time transfer students Mac McClung and Marcus Santos-Silva, the Red Raiders have the potential to be bracket busters. Texas Tech led the Big 12 in scoring Defense and won games at the free throw line. Armed with playmakers, a strong defensive mindset and a coach that’s been in a National Championship game, don’t blink on Texas Tech.

Why I Dismissed Other High Seeds

Basically, I think Purdue is boring and lacks the offensive punch to make a deep run. They play great defense but also turn the ball over at a high rate. My biggest issue is Purdue’s youth. Four freshmen play significant minutes in their rotation and I think at some point inexperience is going to derail their season.

Losing Colin Gillespie for the season was a huge blow. A long COVID layoff didn’t help them at all. The Wildcats still have Offensive fortitude but are suspect on defense in stretches. I think without Gillespie to lead and take over crunch time Villanova could be headed home early.

Round 1 Matchups and Betting Considerations

Sharp money is on Colgate +9

I hope this helps your brackets and bankrolls. When in doubt remember the lessons learned in our March Madness Insight article. Also be sure to check out our East Region, Midwest Region and West Region Previews as well. Good luck DSB Fam.