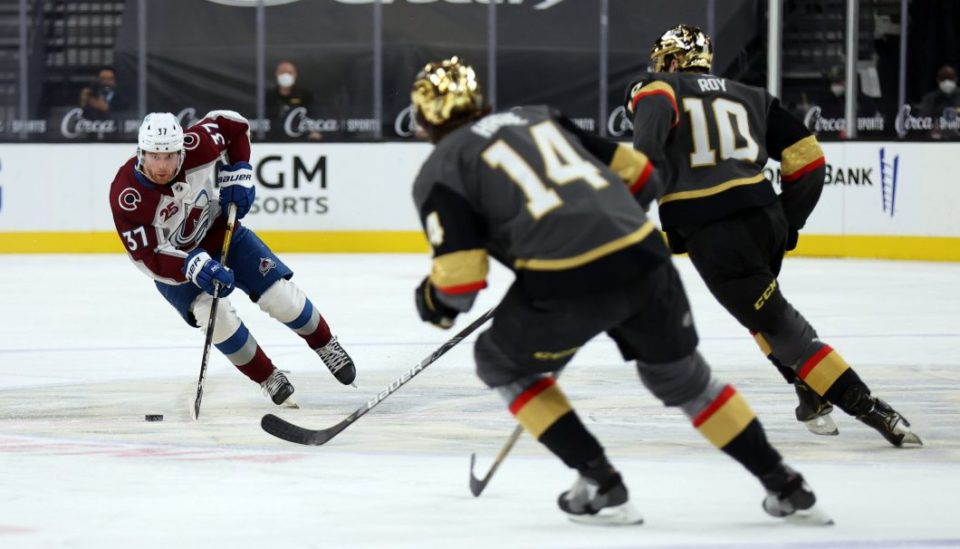 The four-game series between the Colorado Avalanche and the Vegas Golden Knights reaches its conclusion as the Knights travel to Ball Arena to take on the Avalanche. The Avalanche have the edge with a 2-1 record through the first three games, including their latest win Saturday at Lake Tahoe.

The Avalanche won 3-2 with goals from Samuel Girard, Nathan MacKinnon, and Devon Toews and a .932 save percentage from goaltender Philipp Grubauer. After losing the first game of this series, the Avs have now won the last two with the same score of 3-2.

Both of these teams are evenly matched and defensively strong, and as such, we’ve not seen any favorite cover the puck line yet and the under has gone 3-0.

The lines for tonight (subject to change)

The action to consider.

So far this series, there has been little reason to believe either team that a plus money puck line will hit as both clubs seem far too evenly matched. This game is the last one of the four and one that’s coming off of a wild outdoor game over the weekend that saw a nine-hour delay. While this preview is getting written before any official news has come out about the starting roster, a safe assumption could assume that either club may rest their starting goaltender. If both teams choose to do so, the Knights have by far a better situation at backup, and coming off back-to-back losses, they have good value now. Knights ML +123

In sports betting trap games lie every now and again, hidden from plain sight. The under made sense going in every single game and it has hit every single game. Again, the goaltender situation will have to be closely monitored, but assuming one, if not both red-hot goalies get this night off, take advantage of the low 5 over/under. Over 5 goals -103

We rarely take the opposing team’s player props because we rarely take the opposing team’s Moneyline, but since we’ve hopped on the Knights from a betting perspective we might as well hit a prop on them. Mark Stone is one of the best right-wingers in all of hockey, he also has 16 points this year but has made little to no impact in the last three games against the Avs. He knows this, and he’s due for one. Mark Stone goal +270

To balance out the equation, we have to make up for it and bet something to go in the Avs favor. Although maybe not the best payout, it’s still a very solid look, Cale Makar is usually involved in some form of a goal happening. Makar 1+ point -157

Puck drop is 7 p.m. MT and expect the Knights to bounce back and even this series out.