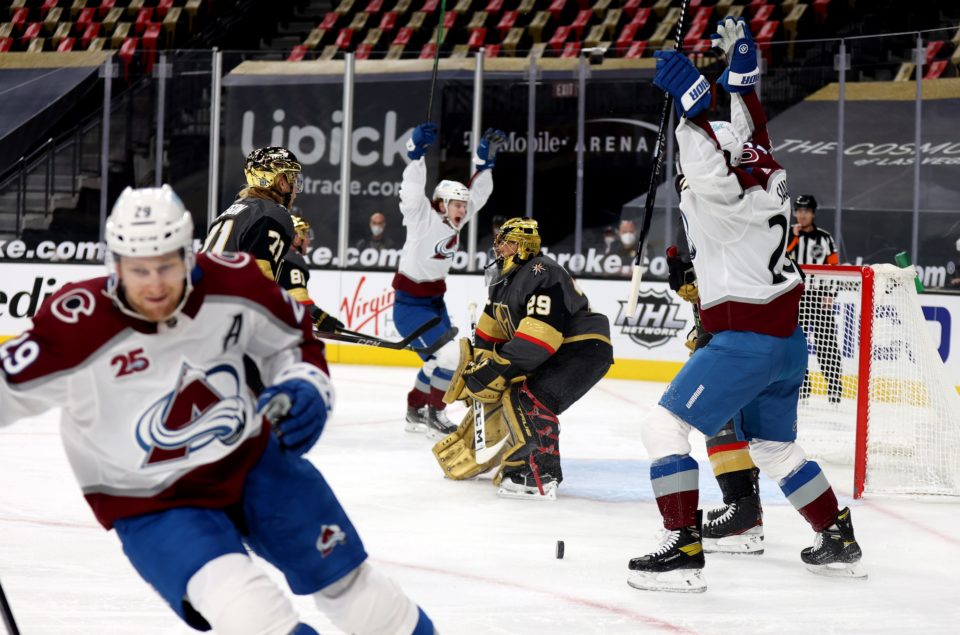 Last game the Avs were able to snatch victory from the jaws of an overtime appearance. Nazim Kadri scored with 40 seconds left in the 3rd period, in a tightly contested 2-2 game to eventually give the Avs a 3-2 victory against the Knights. The series is now split at one game apiece with the second half ready to kick off with the stunning backdrop of Lake Tahoe.

This will mark the third time that the Avalanche have played in an outdoor game, and unfortunately, they have yet to be on the winning side of things when it comes to outdoor hockey. The Avalanche lost to the Detroit Red Wings at Coors Field in 2016 of a final score of 5-3 and then lost last year at the 2020 Navy Federal Credit Union Stadium Series to the Los Angeles Kings 2-1.

This game will be played at an altitude of 6,224 feet making it the second-highest outdoor game played for the NHL only behind last year’s prior matchup in Colorado Springs at the Air Force Academy (6,621).

Both teams will sport the reverse-retro jerseys this weekend as the Avalanche will pay homage to the Quebec Nordiques with an immaculate cross-over representing the bond between both franchises.

The trends influence sports bettors’ decision-making when it comes to taking the action and for good reason. This outdoor game, in the elements of bright sun and fluctuating temperatures, tends to buck what we know of the trends and set a new precedence. The return of guys for the Avs like Tyson Jost, Gabriel Landeskog, Samuel Girard and a possible Cale Makar make the Avs look more enticing. These teams are far too evenly matched to have confidence in puck line bets, but if we go down, we go down as Avalanche fans. Avs ML -115

The Golden Knights have started to struggle to find the back of the net, and if not for their stellar performance of a legendary Marc-Andre Fleury they could have lost some ground in the West Division. In the last four games the Knights have played, they’ve averaged 1.5 goals a game. The Avalanche also have allowed the leagues lowest goals per game at 2.08. The value is good in the 60-min line if you like the Avalanche. Avs 60-min line +137

SuperBook is running a promo offering Avs +3 to all users (new and existing) for even money. Take advantage of that if you are betting on the Avs.

This is the third game in the series and both games prior saw the under hitting. Let’s also not forget the Avs have a 2.08 goals allowed average which is the lowest in the NHL. The second-lowest GAA in the league belongs to non-other then the Golden Knights at 2.14 goals a game. Fleury has a .937 save percentage and Grubauer has a .936 save percentage which is also among the best in the league when given the number of games they have both played. Under 5.5 goals

Mikko Rantanen shot the puck on net only two times last game. This would seem normal for most players, but not Rantanen. The books continue to offer his shots on goal average at 2.5 SOG, but let’s look a little deeper. Rantanen logs about 20 minutes of ice time per game which is one of the most on the entire Avalanche roster not on defense. Rantanen has 45 shots through 13 games which averages to 3.5 shots per game. Over Rantanen 2.5 SOG.

The fact the MacKinnon has 3 goals through 12 games played still makes little sense in the realm of hockey. He was the first to score last game and he’s going to be ready to show the hockey world why he is still one of the best. He also has a team-high 49 shots this year, it’s a numbers game at this point. MacKinnon goal +138