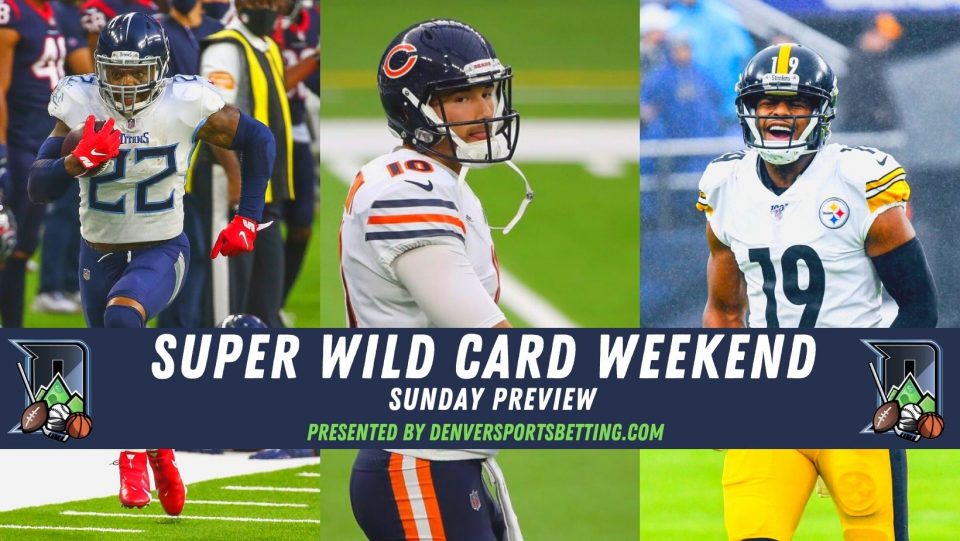 Wild card weekend is finally upon us. Those of us that are about to consume 18 hours of quality NFL Football salute the league for completing a complicated and somewhat tenuous season. Those of us looking to profit are intrigued by all the rematches and storylines heading into the weekend.

The NFL is dishing out a six-game weekend slate that features three games each day. We the people get to indulge in some intriguing clashes that will show who’s contending and who’s pretending.

Here’s what to look for in each match up so you gain an edge and be profitable with your wagers this weekend:

The Sunday NFL slate kicks off with an intriguing battle between two rivals. The Ravens and Titans meet again. The Ravens have to be looking at revenge for last year’s playoff defeat at the legs of Derrick Henry and the Titans. Similar scenario to last year, however, this time the Titans are at home, and the Ravens have shown more vulnerability throughout the season.

The Ravens head to Music City as -3.5 point road favorites. The wise guys think this could be a high scoring game and have the game total coming in at 54.5 points.

The betting public is leaning towards a shootout as well. According to the Action Network, 70% of the money is coming in on the over.

Both teams head into the playoffs with 11-5 records. Tennessee has the edge due to their Week 11 victory, when the Titans won a close game in overtime in Baltimore 30-24.

Since their Week 11 loss to the Titans, the Ravens are on a 5-game win streak in which they’ve averaged 37 points per game.

The Titans are limping into the playoffs with some serious issues on defense. Over the past six games, Tennessee has given up 32 points a game on average.

These teams know each other well. So the high game total confused me originally. Upon review, it’s clear that both these teams are high-risk, high-reward programs that put up a lot of points, even though both teams are run centric offenses.

The Ravens are the superior team and, if they limit their turnovers, they could end up blowing out an inconsistent Titans team.

Tennessee will need a solid defensive performance in this one to have a chance. Unfortunately, I think their time is up. If Baltimore gets a significant lead in this one, it’s unlikely that the Titans have the offensive prowess to make a comeback.

The Ravens and the points up to -6.5 seems like a solid play.

Da sportsbooks expect Da Bears to get boat raced in the Superdome on Sunday. The Saints stroll into Wildcard weekend as -10 point home favorites. Oddsmakers declare a game total of 47.5 points for this match up.

The Bears are boring and play a slow-paced low-risk offense. They want to live and die with their defense and keep games close, hoping to capitalize on turnovers. They have no chance to make comebacks of multiple scores.

The Saints seem to be getting healthy at the right time. For only the second time this season, Drew Brees, Alvin Kamara and Michael Thomas all have a chance to play at the same time. Regardless of personnel, the Saints offense has been rolling for weeks.

It’s hard to envision a way that Chicago can scratch out a victory on the road. The Saints’ defense and special teams are too good to give the Bears a chance to capitalize on any potential mistake.

If the Saints get a double digit lead this game is over; Chicago does not have the fortitude to make a comeback against a good Saints defense. These teams met in Week 6, with the Saints pulling out a 3 point overtime victory in Chicago. Nick Foles was the starting QB back then, and both teams were healthy. This could be the last ride for this version of the Saints. It’s a home game for Brees, and he has a full complement of playmakers; strongly consider the Saints up to -11.

Browns and Steelers going for round 3 and second game in as many weeks for these two rivals. The 2020 kiss of death has hit the Browns again this week. Members of the coaching staff and offensive line have been ruled out due to COVID positive tests. Head coach Kevin Stefanski and starting guard Joel Bitonio are the biggest names and biggest losses for Cleveland.

With the Covid issues and with the inexperience in a playoff environment do the Browns have a chance in this primetime game?

The Steelers are a -6 point home favorite, and the game total is hanging out at 47.5 points. Everyone knows the Steelers playoff consistency over the years, which gives Cleveland a huge disadvantage. How can we not strongly consider the home Steelers at -6?

We can get stats and look at trends to try and find positives for the Browns, but there’s not anything out there in my mind that’s going to compensate for the loss of a head coach for a team that hasn’t been in the playoffs in 22 years.

I love the Browns future, and I think Baker Mayfield has the gusto to keep things interesting, but there’s no way I’d bet against the Steelers in this spot.