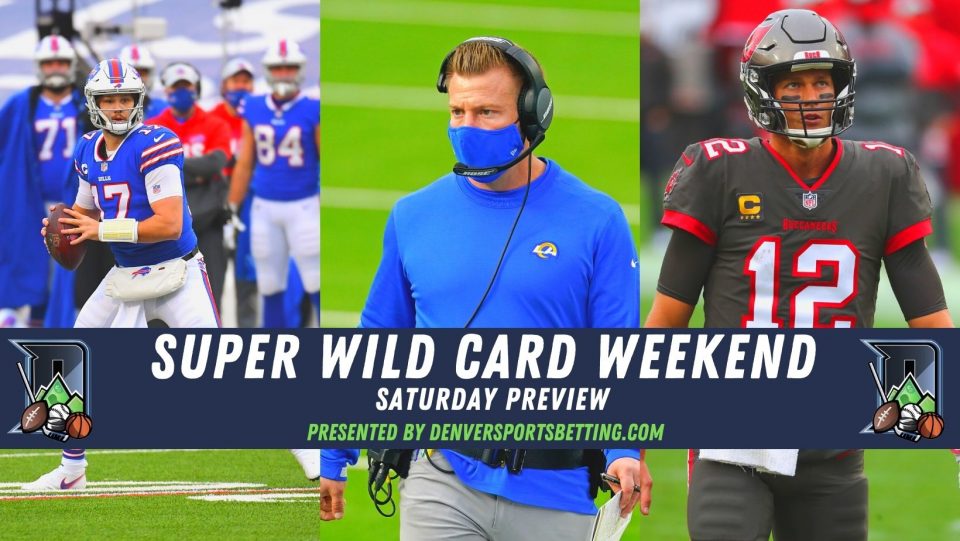 Wild Card Weekend is finally upon us. Those of us that are about to consume 18 hours of quality NFL football salute the league for completing a complicated and somewhat tenuous season. Those of us looking to profit are intrigued by all the rematches and storylines heading into the first weekend of playoff football.

The NFL is dishing out a six-game weekend slate that features three games each day. We get to indulge in some intriguing clashes that will show which teams should be considered contenders and pretenders.

Here’s what to look for in each matchup in order to give you an edge and be profitable with your wagers this weekend:

The Bills start a possible playoff run as -6.5 home favorites. The game total is the second-highest total of the weekend at 51.5 points.

The Colts come in with a disadvantage in the injury department. Starting left tackle Anthony Castonzo is out for the season, and they have a pair of defensive backs in concussion protocol.

The Bills head into Saturday’s matchup on an offensive hot streak; scoring at least 24 points in their final eight games. Josh Allen has been playing like an MVP candidate and is going to be a handful in front of the largest crowd of the season. The Colts are banged up in the secondary, and this becomes an advantageous spot for the Bills to attack with the deep ball. In the last five weeks, the Colts have allowed 23 pass completions over 20 yards.

The Colts run game is their key to success. Jonathan Taylor and Nyhiem Hines lead the backfield. Since Week 11, Taylor is second in the NFL in rushing. Hines has been rated the top pass-catching back in the NFL by Pro Football Focus. Philip Rivers has shown the fortitude to continue to attack with the deep ball; unfortunately, his heater has been at change-up speed for the last few seasons. If the Colts have a chance in this one it’ll be because of the success of their run game; not the arm of Rivers.

The Bills are a superior team in every way on paper. The Colts are capable of winning this match up if they take advantage of every opportunity the Bills give them. However, this outcome does not seem likely. The Bills have been playing lights out for weeks now. Josh Allen has been able to impact games with his arm and legs over the course of the season. In the end, expect the Bills to hit big plays in the passing game and sustain drives with clutch Josh Allen scrambles. Don’t be surprised if the Bills win this game by more than one score. Since week 9, the Bills are 8-0 ATS with an average cover margin of 14.8 points per @Betlabs.

The rubber match between these two division opponents; both teams won their home game this season. Seattle comes in as a -4 point home favorite, and there is a game total of 43 points.

It’s hard to break this game down without knowing who will be at QB for the Rams. Based on the info we have today, this is Seattle’s game to lose. 4 points seems too close considering the possibility that the Rams could be starting a novice at QB.

Things we know for sure-

Based on the information we have today, the under 43 points seems like the optimal play. If Jared Goff does not play, strongly consider Seattle up to -6.5.

Saturday night in the cold outdoors of D.C., this has low scoring punt fest written all over it. The Bucs head out on the road to Washington and come in as -8 road favorites. WTF?  I mean WFT is a division winner, and they get the opportunity to play a home playoff game. In what is expected to be a cold east coast night the oddsmakers have the game total in this one at 45 points.

The Washington Football Team (WFT) play a slow run-based offense and rely heavily on their defense to win close games.

The Bucs like to push the ball up-tempo between the 20s and run smash-mouth near the goal line.

The only chance Washington has in this one is to create turnovers and score touchdowns off them. There is still no official word on if Alex Smith will start for WFT.

The Bucs should be able to control this game in every facet, barring major turnovers or critical injuries to key players, Tampa should be moving on to the next round. Expect a slower than normal paced game for Tampa Bay, as they will protect the ball and field position. In the end, Brady finds a way to win an overall boring game. The under 45 points feels like the play here.