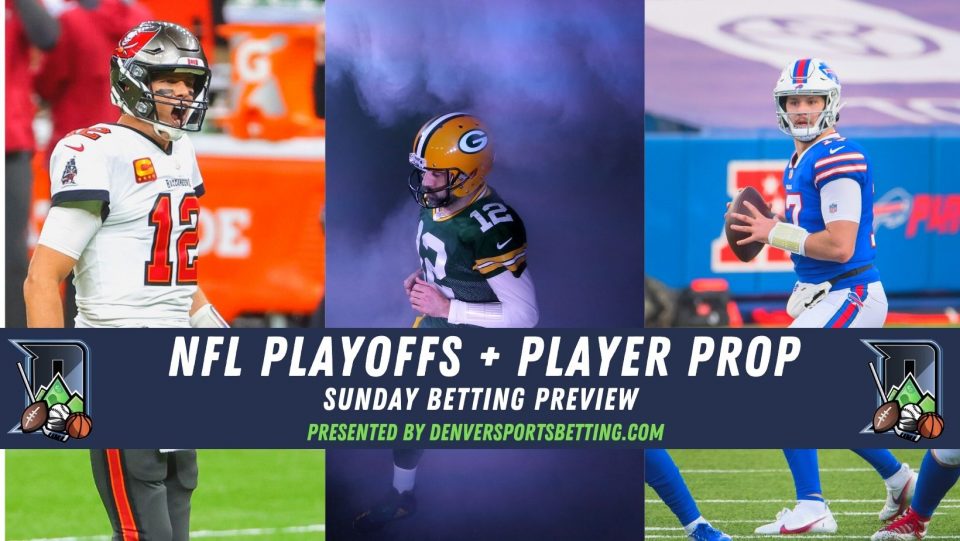 Here’s what to look for in each matchup; hopefully, this gives you a huge clue in how to gain an edge and be profitable with your wagers.

In a rematch from a week six blowout, the Bucs head north for their third straight road playoff game. Unfortunately, as good as Tampa is playing, the ride might be over. In the past 35 seasons, road playoff teams heading into their third game have gone 3-11 SU and 4-10 ATS.

However, remember that none of those teams had Tom Brady. According to our friends at Fantasy Labs, teams that won the first meeting against a postseason opponent are 55-39 (59%) in the rematch.

Aaron Rodgers at home throughout his career has been anything but easy to beat. All-time at Lambeau, Rodgers is 62-35-4. Add in the potential weather concerns, and there is a built-in advantage that could favor the home team big time.

This feels like a build-up for a new Marvel movie about to hit theaters. All the fans want is for the hype to be real. Rodgers vs. Brady with everything on the line. Two high powered offenses with playmakers galore. Two defenses that can show up big. My goodness, please let this come down to a last-minute drive.

A dream matchup in a conference title game. Can Rodgers finally get back to the Super Bowl? Or will Brady once again show the league who owns it? I can’t wait for this game to start.

Expect the Packers to establish game flow from the beginning. They’ll build into their offense by establishing the run and getting Rodgers into rhythm with easy completions. Rodgers won’t take chances until he has to. If the run game is working. Green Bay is the slowest-paced offense in the league; however, they rank 1st in points per drive. Green Bay playing at their pace at home in the weather could be the key to pulling this game out.

Expect Tampa to try and push the ball downfield once they can confirm Brady is protected. Last week against the Saints, Brady’s safety was taken care of first. Tampa ran out of the 12 and 13 personal sets over 65% of the time. This means they had 2 or 3 TEs assisting with pass blocking for the majority of the game. Antonio Brown has already been ruled out for Sunday. This impacts the RBs and Chris Godwin. With Brown out bump expectations for RB targets and bump the amount of time Godwin will spend in the slot.

To me, this game is a coin flip. I would love to see Aaron Rodgers back in the show, but I have a lump in my throat that Brady finds a way to pull out a nail biter. Hopefully, I’m a jinx; but I’ll take Tampa Bay +3.5, and I’ll lean towards the Under 52 hitting in this one.

Kansas City plans to protect its house as -3 point Home Favorites with a 54.5 game total.

Ok, Chiefs kingdom, are you ready for a repeat or for the dynasty to crumble in year 2? The Bills Mafia is coming in on a heater and have every intention of sending the Chiefs home for the offseason.

Offense for days. Passing yards for days. What’s a running play? This is how I would describe the game plan for each heading into this matchup. Both teams have injuries in their RB room, and both teams may be without their starting RB. The Chiefs rookie stud Clyde Edward-Helaire is a game-time decision while Zach Moss is out for Buffalo.

In a match-up earlier in the season, the Chiefs were able to contain Josh Allen and his pass-catching playmakers. The running game for Kansas City was on point in that game CEH rushed for 161 yards on 26 carries. Sunday’s game will not be controlled on the ground for either team.

This is going to be a big play push the ball downfield type of contest. Buffalo has been a one-dimensional pass-first team for weeks. Josh Allen has led the team in rushing yards 6 times this season. Without a healthy CEH, the Chiefs are a completely different running team. Factor this in for both teams, and you can see how leaning on the passing game could come into play.

To me, this is simple; can the Bills score with the Chiefs? Although the spread is close, I could see the Chiefs pulling away and never looking back. The Bills’ have the weapons but do they have the experience and fortitude to hang around?

I’m not going to get into stats for a game like this. The Chiefs are the defending champs and know how to win in a lot of different ways. Buffalo has exceeded expectations and have gone deeper into playoffs than anyone expected. Games like this come down to experience and late-game execution. To me, this game is Kansas City game 99 out 100 times. That 1 time would be after a 7 turnover performance by the Chiefs.

Give me KC -3 all day, wouldn’t be shocked if KC won by double digits.