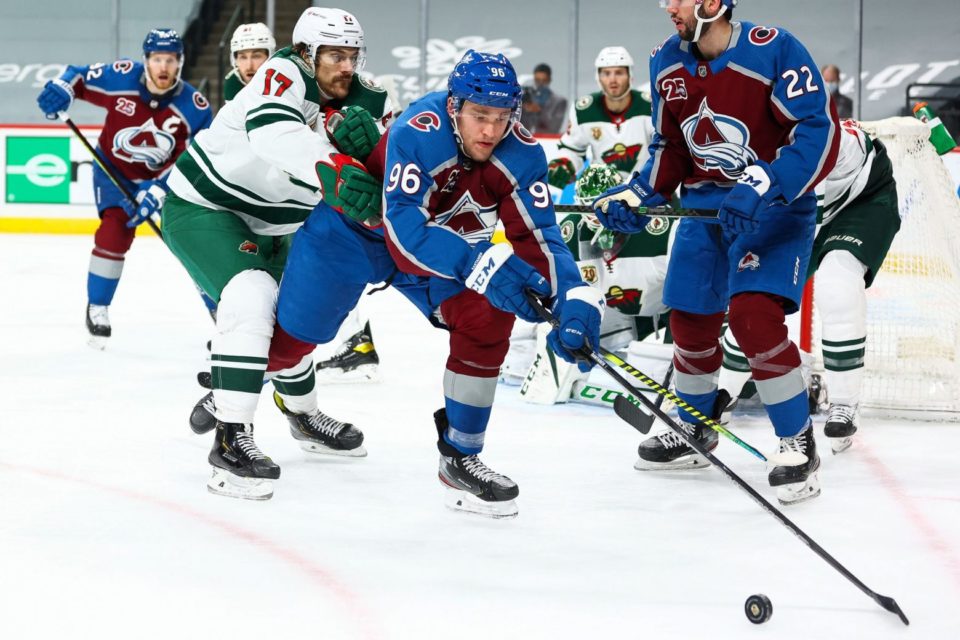 The Colorado Avalanche continue to roll and so do we over here at Denver Sports Betting. The Avalanche won last night in Minnesota in commanding  5-1 fashion. The Avalanche saw contributions on the ice from all over the roster as they had five different skaters register two points, and another five register one point. The Avalanche are now 6-3 on the season with 12 points and reside at the top of the West Division.

Mikko Rantanen continues to roll for the Avalanche scoring his seventh goal last night which placed him second in the entire NHL for goals scored. Philipp Grubauer has also been incredible in net for Colorado, and after last night’s performance, he now has one of the league’s best goals-against average (1.75).

The unfortunate news is that long-tenured Avalanche defenseman Erik Johnson left the game with an apparent upper-body injury on a hit and did not return and will be questionable to play in tonight’s game. Colorado’s current backup goaltender, Hunter Miska, is now expected to get tonight’s start. Miska played one game already for the Avalanche back on Jan. 21 in a 4-2 loss against the Los Angeles Kings.

The Minnesota Wild will remain without their starting forward Kevin Fiala, as he is in the midst of his three-game suspension.

After the Avalanche had started the season struggling to cover the puck line, they have now hit it the last three games in a row and are riding a three game winning streak. The Wild on the other hand are now 2-7 this season on/against the puck line and are 2-5 in their last 7 home games overall.

The Avalanche proved us wrong last night and decided to throw one more goal in net to blow the under. And with the red-hot Avalanche, the Over looks enticing — especially with a backup in net for Colorado and possibly Minnesota tonight. I caution against this, Miska played a solid game his first game and his stats do not reflect it. Plus, after losing by four goals the Wild are expected to tighten up some things on their end and not surrender so many power plays to the Avalanche. The under is 5-1-1 in the last seven in Minnesota. Under 5.5 +100

The Avalanche are on a roll right now winning the last three in a row, but the last Sunday game the Avalanche had was a 3-1 loss against Anaheim last weekend. Back-to-backs are hard on the road, it’s hard to trust the Avalanche puck line in this one even though it’s on a four-game streak, somethings bound to give you can’t hit it every night. Wild puck line -200

Guess what prop we’ve mentioned more than any other? Mikko Rantanen shots on goal is one of the most sure-fire props for Avalanche betting this year, it may as well be called “Ol’ Faithfull”. He’s got seven goals this year, the team, the coach and the universe knows he should keep shooting the puck. Rantanen Over 2.5 SOG -157

Makar has yet to score this year, and if you go back to last year you would see that he’s impacted the game much more on assisting than scoring (10 assists this year). However, with his five shots on goal last game, his hand on the Avalanche’s top power play unit and teamed up with how many times he joins the attack as a defender, it’s his time he gets his. Goalscorers are a risky bet every night, but with the value that Makar scoring has on the books, it might not be a bad idea to give this one a look. Makar goal +325