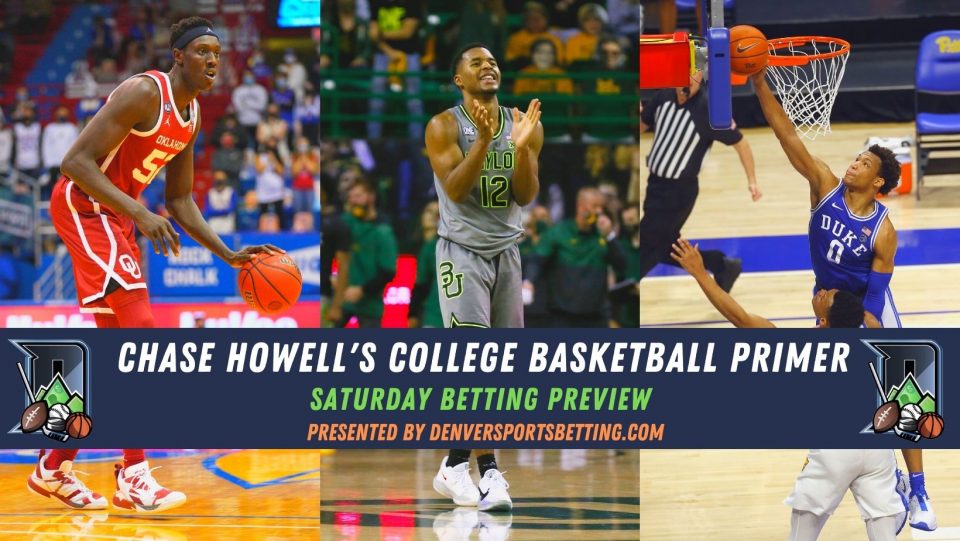 We’re back for another edition of the College Basketball Saturday Primer. We had an alright week last week, nobody that took all of the picks lost money but we also expect to do better than what happened last week. We are only going to be doing the notable games for these write-ups. If you want some picks on some obscure games, feel free to tweet me @chasehowell__.

Without further ado, let’s take a look at the slate.

Kansas had the cover of the season so far, hitting a bank three at the buzzer to lose to Baylor by eight and cover the +8.5 game spread, earlier this week. They were out of that game the whole time and really had no business covering. These two teams have already played once this season, with Kansas coming out on top 63-59 in a tight game at Allen Fieldhouse. Now the Jayhawks will have to travel to Norman. The Sooners were missing one of their top players, Brady Manek, for that game. Manek has been dealing with a series of health issues during the month of January. He returned last game against Kansas State, only playing 11 minutes. But his coach believes he will have a bigger role against Kansas.

I see this game as a toss-up. As I write this, the line is right around a pick ‘em. I have two leans: taking Oklahoma and the under. But I’m not confident enough to make them an official play.

Nothing like a big-time Big East matchup to get the morning started. Man, does it feel good to have UConn back in the Big East again. Creighton just got their star guard, Marcus Zegarowski, back from a hamstring injury this past week. Unfortunately, it appears UConn can’t say the same about their star guard James Bouknight. He is likely to be out for a couple more weeks. These two teams went to overtime already once this season but that was with Bouknight healthy (dropped 40 points in that game). Uconn is really not that good of a team without him (lost to St. Johns earlier this week) and Creighton has been much better at home than on the road this season. I think Creighton covers at anything -7.5 or lower. I also like the Over in this game. Creighton has proved they can put up a ton of points in their own gym and I don’t think Uconn will have to score that much to hit the 138 number.

One of the top teams in the nation on the road against one of the top players in the nation in Cade Cunningham. This will be a must watch game so we’re going to have to find some action on it. Oklahoma State has actually been a better team ATS on the road than at home this season. They are 2-4 ATS at home while 4-1-1 ATS away. I look for that trend to continue. I just don’t think Oklahoma State has the horses to keep this game close. Baylor is too good and I think they will continue to roll. Take the points all the way up to -9. I also like this game to go Under 147. I think Baylor would have to score a lot of points to cover that total and I don’t see that happening with Oklahoma State’s length. My favorite bet of this game will be parlaying Baylor Moneyline with the Under.

The AP Poll has been abysmal this season. This is an AP Poll is very wrong matchup. Florida State should quite clearly be ranked while Clemson, although they deserved it earlier, should be out of the top 25. Florida State is rightfully so a 6.5 point favorite in this game. Clemson has been terrible the last two games. Their defense, which was the top defense on KenPom last week, has given up 80+ points in back-to-back games against teams without outstanding offenses. These two teams couldn’t be going in more opposite directions. Clemson is 0-3 ATS on the road this season while Florida State is 3-0 ATS in their last three games. If those trends continue, Florida State should cover the spread with ease.

Another matchup I couldn’t be more excited to watch on this great Saturday slate. Two of the top teams in the best conference in the nation. I have no idea what the sportsbooks are doing setting the game total at 133. This game is going Over. It’s my favorite bet of the slate. If you take one bet from reading this, I hope you put it on Over 133. I haven’t been impressed with either of these teams defensively but they can really light it up if their shooters get hot. If I had a lean on a side, it would be towards Wisconsin. I think they figured some things out after that embarrassing loss to Michigan and they’re a much better team at home. Over, Over, Over.

I glanced at this one and thought is this really a notable game? That’s just where we are with this college basketball season. The blue bloods aren’t of interest for those of us that follow this sport religiously. But, nevertheless, it is still an intriguing matchup. The other reason I like this game is it’s a virtual pick ‘em and I almost always love taking a side for these types of games. I’m leaning towards Louisville as the home team. Nothing that Duke has done this season has impressed me, I think they could possibly be an NIT team this season. Especially if there name wasn’t Duke. The Blue Devils are 1-8 ATS this season. I also like this game to go Over 140. The total has gone over in four of Louisville’s last five and Duke has been playing at an incredibly fast pace.

Why is this game on SEC Network? This is a prime time game between two ranked teams and arguably two of the top teams in the SEC. I don’t think anybody has flown under the radar more this season than Tennessee. They dealt with a massive outbreak to start the season and they play on these hidden networks. They got ran out of the gym by Florida earlier this week. Their first really bad performance of the season. These two teams have already played with Tennessee beating Missouri by 20 in their own gym. Keep your eye on some Tennessee injuries: diaper dandy Jaden Springer has been dealing with a finger injury and Santiago Vescovi picked up a knock in the Florida game. If those two are out, I like Missouri to cover. Otherwise, I’m staying away.