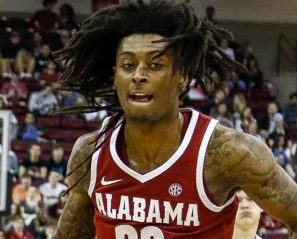 Welcome back to Chase Howell’s College Basketball Saturday Betting Primer. We had a great week last week, going 6-0-1 on official picks and 8-2-1 if you include the leans. Hopefully, you guys cashed and we’ll try to keep the momentum going this week. We’ve got an electric slate with the SEC going up against the Big 12 this week.

Without further ado, let’s get right to it.

Alabama failed to cover against Mississippi State last week, they are now 9-1-1 ATS in their last 11. Everybody knows about them now, yet they still open as an underdog against a mediocre Oklahoma team? Doesn’t make much sense to me. We cashed on Oklahoma last week but I don’t think they have the firepower to hang with Alabama. The Tide have a lot of volatility due to their playing style (high volume three-point shooting), but this has been a week of betting on volatility. Take ‘Bama as long as they’re a dog or it’s a pick ‘em.

This is an interesting matchup between two teams that haven’t quite lived up to expectations this season. To my eyes, it’s two teams that I’ve avoided betting on for most of the season. So I will likely stay away. I do like this matchup for West Virginia. I think they’ll be able to force Florida to turn the ball over (Florida is ranked 197th in the country in turnover percentage) which should lead to more possessions. If West Va. can dominate the glass, I think they can win this one handedly. It’s a lean but I like West Virginia -5.

This is definitely an intriguing matchup. You have one team that loves to score and plays no defense against one of the better defensive teams in the country. But these are two teams that are a combined 12-19 ATS this season (both with losing records). I’ll take the defense in this matchup. I think Texas Tech has enough fire power offensively to put up points against a putrid LSU defense and they can slow LSU down on the other end. Tech has actually been better ATS on the road than at home. Texas Tech -3.5 seems like a great spot to be on the Red Raiders.

If you know me, you know I love Big East basketball. So we always have to sneak a game into the slate. Seton is going through their toughest stretch of the schedule where they play Villanova, Creighton and then Villanova again. The Pirates only lost by two on the road against Villanova last week. And I expect them to keep this one close as well. Seton Hall is one of the best power conference teams against the spread at 17-10-1 this season. I look for them to continue that and keep it within a possession against Nova. I expect some line movement before the game but I’ll make the official play Seton Hall +5.5.

This should be an awesome matchup. I feel like this could easily be an 8 vs. 9 or 7 vs. 10 matchup for the NCAA tournament (If Oklahoma State is ruled eligible). Cade Cunningham has been out the last couple of games for the Cowboys so that’s the first thing we should be keeping an eye on although they haven’t looked terrible without him. They hung in the first half with Baylor and then dominated a decimated Iowa State team. On the other side, Arkansas appears to be heading the wrong direction. If Cunningham plays then it will be really hard not to take the Cowboys in this spot. The one thing that worries me is Oklahoma State has been a much better team on the road ATS than at home. We’ll keep it as a lean for now but if Cunningham plays, I will have some action on Oklahoma State -3.

This is probably the game I’m most excited to watch. One program on the rise and one on the decline. Last week, we talked about the injuries the Vols were dealing with including star guard Jaden Springer. He ended up not playing and we cashed in on Missouri last week. He returned for the Mississippi State game in a limited role. Both these times have not been good ATS as of late. But I do think Tennessee, with their perimeter defense, will be able to shut down Kansas. I’ll be keeping my eye on the Under leading up to the game and I’ll be looking at taking the under on Kansas’ team total. Otherwise, I will be playing Tennessee -2.5.

A little rivalry game to throw into the betting primer. Virginia Tech is having an impressive season and Virginia is doing their usual thing under Tony Bennett. The difference about this Virginia team, is they’re actually pretty good offensively. They rank as the No. 10 offense on KenPom. The Cavs are playing their best basketball, 4-1 ATS in their last five games. They’re also 3-0 ATS on the road this season. Virginia Tech has also been playing good basketball and you know they’ll get up for a game against their heated rival. I’m staying away from this one but it will certainly be a fun game to watch.

I went back and forth of adding this game to the slate for the primer. It won’t be a game that people are clamoring to watch but it should be a good game between likely two NCAA tournament teams. And I’d only add it if I felt pretty good about a side. I feel pretty good about Purdue in this spot. Minnesota has been abysmal as a road team this season (0-4 ATS). They also looked terrible against Maryland this week at home. And Purdue is playing some good basketball right now. They’re 4-1 ATS in their last five. And I like them to cover the -3 at home against the Gophers. I’ll be keeping my eye on the Over here and might consider playing that as well.

Kansas vs. Tennessee Under 130

Minnesota vs. Purdue Over 140

Sports Betting in Colorado Leveled Out for October