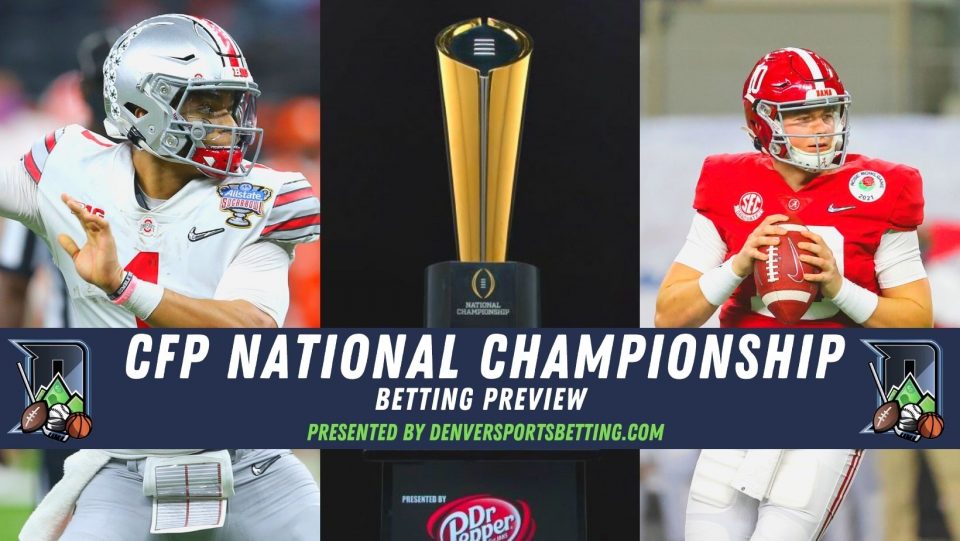 Alabama Crimson Tide vs. The Ohio State Buckeyes for all of the marbles. There’s no Cinderella story in this one as both teams were picked to be near the top of college football this season. But no doubt it’s as intriguing of a matchup as you’re going to find this season.

These two teams have matched up four times in the schools’ history. Everyone should remember the last time these two played in 2015 when the legend of Cardale Jones grew and Ezekiel Elliot ran all over the Crimson Tide defense. The Buckeyes went into that game as 7-point underdogs and ended up winning outright by seven.

That game ended 42-35 (a total of 77 points), and both these teams have arguably more high-powered offenses than five years ago. So that brings me to the first bet I love in this game. The over. Look, you might see the total at 75.5 and think that is a giant number, but anybody that has watched Alabama and Ohio State this season really shouldn’t.

Ohio State boasts Justin Fields, one of the top quarterbacks in the country, with weapons around him in Chris Olave, Garrett Wilson and his running back Trey Sermon. They average 43.43 points per game, and the total has gone over in four of their last five games.

On the other side, we’re talking about one of the best offenses we’ve ever seen. They have three first team All-Americans, including the Heisman trophy winner Devonta Smith. Najee Harris is one of the top running backs in the country. And Jaylen Waddle, a receiver that was expected to be out for the season and had more hype than Smith heading into the season, is set to make his return.

Alabama has averaged 48.17 points per game this season, and the total has gone over in seven of their 12 games this season. Take the over and enjoy the show.

Now, if you’re looking to take a side, I would pay very close attention to the news during warmups. Ohio State has had some COVID issues this past week, and there are rumors circulating they could be missing quite a few players. If they are missing significant starters, I would lean towards Alabama.

I like Ohio State to hang in there in a track meet as long as they aren’t missing significant starters.

If you’re looking to get into some props, well there aren’t as many as the Super Bowl but still some decent options. I think Ohio State to score first has some decent value as it really depends on who gets the ball first, and Ohio State has had the ability to strike early almost all season long.

If Jaylen Waddle plays, I like him to score at +110. Ohio State’s secondary will put most of the emphasis on Devonta Smith, allowing Waddle to take advantage and hopefully find the end zone.

Other trends to note: