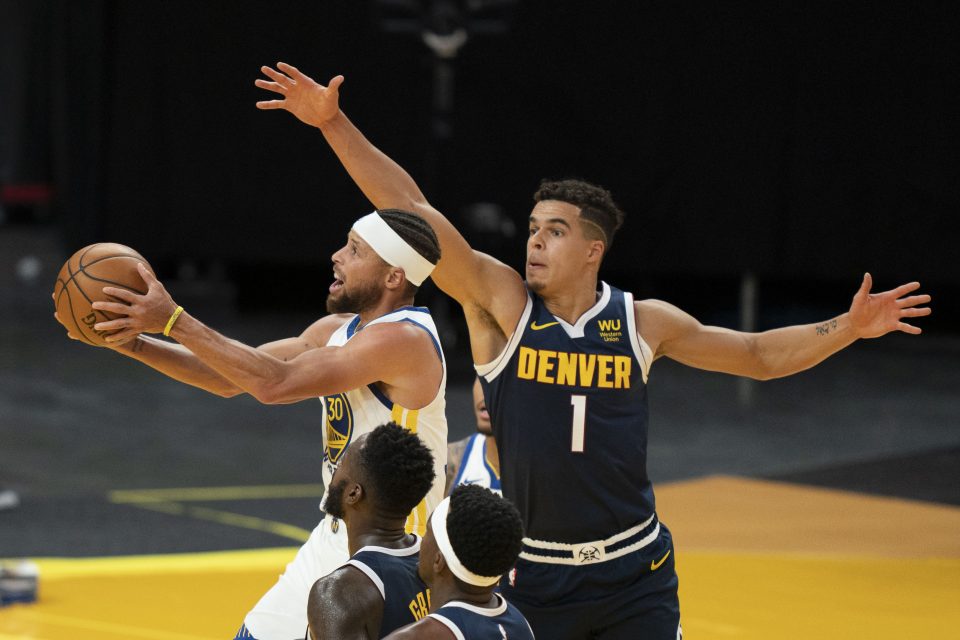 With a historically short offseason and the Denver Nuggets three game preseason now in the books, it’s time to look towards the real deal.

The NBA regular season kicks off this Tuesday, with the Golden State Warriors taking on the Brooklyn Nets at 5 pm MST. The Nuggets have to wait until Wednesday at 7 p.m. MST to kick their season off against the Sacramento Kings. Before the season gets going, here are five things we noticed during the preseason:

With all the new additions Denver has to the squad, having all 5 starters return is big. The only question among them was Paul Millsap, and after Denver’s hand was seemingly forced into the move, the Nuggets resigned the vet to a one-year, $10 million deal.

In the preseason, we saw that this really helped re-establish the rhythm and chemistry that Denver has had in recent years. While the game against the Warriors was a bit disjointed, viewers saw how quickly the starting five found themselves again as they absolutely thrashed the Portland Trail Blazers for two games. It is this chemistry, among other things, that enabled Denver to go on that historic run in the playoffs last year. Having the band back together may not seem like a huge deal, but retaining the same starting lineup will be phenomenal for the Nuggets as they push for an NBA Finals berth. So many members of this team now know what it feels like to lose in the conference finals, and that should serve as a great motivator to get this team over the hump.

Nikola averaged 14 points, 8.7 rebounds, and 6.3 assists per game during the preseason!

Check out his top plays ⬇️#MileHighBasketball

2. Michael Porter Jr. and Will Barton will battle for starting minutes

With Will Barton’s return from injury, he is sure to make a noticeable impact on the Nuggets. However, will he return to his old starting forward spot? Many would say Micheal Porter Jr. deserves such a position and the chance to take off into stardom. Is he ready? Preseason hasn’t shown us much, but he was able to put together an impressive stat sheet and an even more impressive shooting stretch in the last game against Portland. Preseason doesn’t mean much, and his defense has yet to be truly tested. On the other hand, Barton has in the past shown us that his defensive and offensive ability are top tier. Is he still the same Will “The Thrill” we once knew?

There are more questions than answers this early in the season, but one thing is for certain. The position will be in talented, capable hands either way, and the Nuggets are sure to see these two compete the hardest they can to find a role that best fits them and the team.

3. Paul Millsap is a valuable commodity

Fans may never know if this was a panic move forced by all of Denver’s departures, but it may end up that the Nuggets actually secured one more year with a key piece of this team’s future success. Millsap and his attitude helped give Denver a spark against the Clippers when they were up against it, and we all know how that series finished and how important he was throughout that series for Denver.

In fact, Milsap has been the catalyst for much of the Nuggets’ success in past years. A key to this success has been Millsap’s adaptability to what the team needs at the moment. For years it was grit and experience, now it is shooting ability and veteran leadership. His 3pt shooting ability has increased every year for the last three years from 34% in 2017-18 to 43% in 2019-20 when he lead the team in that category. This year he appears to be committed to a similar role.

Denver has a lot of new boys on the team, and with that will come the struggle of creating a new identity for the Nuggets’ second unit. With Denver’s old second team, the fans and the team knew what they were getting; a hardworking group of guys who add a bit more hustle, defensive ability, and pace to the game without dropping off in the quality of play too much.

Now, that unit has been disbanded, with Jerami Grant and Mason Plumlee leaving for Detroit as well as Torrey Craig headed to Milwaukee. It was evident that in the preseason games, there wasn’t that same understanding between the players, as there is no reason to be, yet. Bol Bol, PJ Dozier, Isiah Hartenstein all made their mark as everybody got minutes. JaMychal Green showed his defensive prowess but lacked the scoring edge, which he will hopefully soon find as Facundo Campazzo played the pest and showed what he was about on the court.

Even in the good moments for the bench, it’s clear that this group of players in combination with Denver’s returning role players will need time to mesh to be able to create that continuity that Nuggets fans are used to seeing from one unit to the next. All that said, it leads us to our last note, the depth is still there.

While the second unit still needs to find themselves, their integration seemed quite seamless this preseason. During this preseason, we saw the addition of Hartenstein and Green are sure to make immediate impacts to the team; while the rise of Bol Bol as a key piece and even leader, while he is on the court at times, cannot be understated. Add to that Facu’s amazing passing ability and the new rookie recruits who seem to already be finding some comfort, and the Nuggets offseason is shaping up to be a resounding success.

Remember, this season is jam-packed, with lots of back to backs and little rest. Star players are going to need to sit more than usual to avoid injury. Additionally, the NBA recently passed new rules that have an effect on “load management” during nationally televised games. The new rules enable the league to fine teams for resting star players during national games, which means there should be more bench minutes to go around to offset playing time.

The future looks bright as always for the Nugget’s and with the season right around the corner, excitement grows with every passing minute!