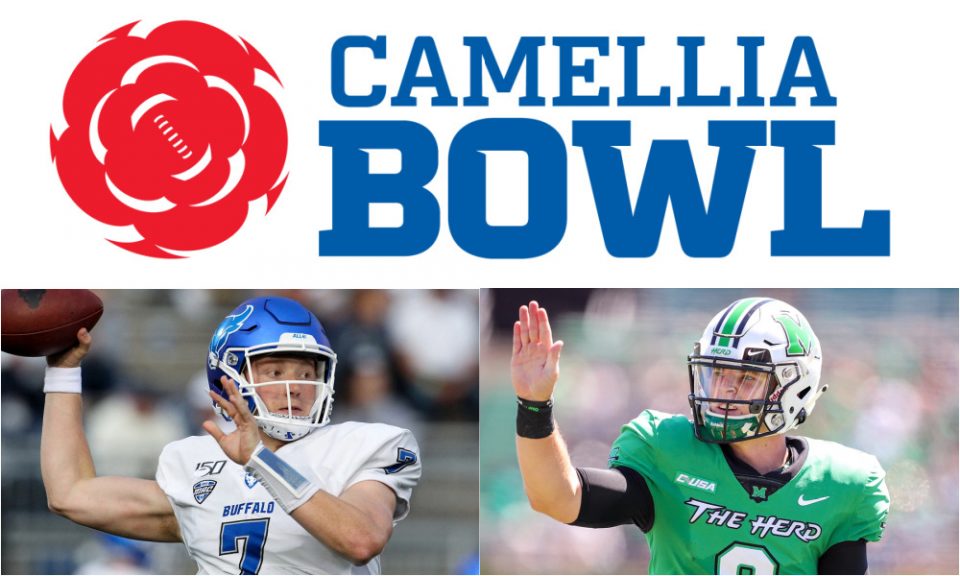 Are you tired of your family yet? Don’t worry because there are some college football games to bet on over the next two days. And although there are no power conference programs playing, there are still some great games to watch.

Let’s get right into the games and how we’re feeling about where we will be placing our action.

We have one college football game to watch on Christmas Day, and it should be a doozy. Two of the top Group-of-5 schools in the nation in Buffalo and Marshall. Both of these teams were having dream seasons, possibly going undefeated, until the last few weeks.

Marshall laid a stinker against Rice when their quarterback Grant Wells threw five interceptions. They are also dealing with some opt outs in this game with their starting running back Brendan Knox and linebacker Tevante Beckett declaring for the NFL Draft.

Buffalo was the heavy favorite to win the MAC Championship and then everything went awry last week in the championship against Ball State. Their star running back Jarret Patterson, who was getting some Heisman talk leading into the game, went out with an injury and Buffalo never looked the same.

Keep an eye on Patterson’s injury status leading up to the game. There was some hope this week that he could possibly play. If he plays, then I really like Buffalo all the way up to -6.

Otherwise, I think the over at 54 is a great play. Both of these teams have been producing high scoring games throughout the season, and I expect it to remain the same in the bowl game. Take the over and enjoy the show.

I’ve watched quite a bit of G5 football this season, these are two teams I haven’t watched much of. Georgia State runs an electric option offense that is very fun to watch.

All of the money is flowing in towards Georgia State. They’re currently getting 56% of the public and 87% of the money. That’s usually a good indication of where this game is going (especially early money) although the house almost always wins.

If I bet on this game at all, I’d look at taking the under. Western Kentucky has a good defense and the total has gone under in four of the last five games. On the other side, you have an option attack so you know they will be trying to slow the game down. If it’s anywhere around 50, that’s likely the smart play.

Louisiana-Lafayette has had a great season so far. It was kicked off by beating Iowa State in Aimes in the opener and they haven’t looked back since. Their one loss came on a game winning field goal against the undefeated Coastal Carolina Chanticleers. They were going to get their revenge against the Chanticleers until that conference championship game was cancelled due to COVID-19 complications.

Both these teams don’t really boast anything special. The Ragin’ Cajuns are very well coached led by head coach Billy Napier who recently turned down the Auburn job.

I think this line has gotten too big. I think UTSA has played good enough football this season that I can see them keeping this game within two scores. The line opened at Louisiana -12.5 and has jumped up to -14. And despite the public backing the Ragin’ Cajuns, the money is significantly on the Roadrunners at 74% according to the Action Network.

I don’t necessarily have a lean on the total but I would look at playing UTSA in this spot.

This is the game a lot of college football gamblers have been waiting for. We almost got it in the regular season before Liberty had a COVID-19 outbreak and we will gladly take it now although both of these teams deserve to be playing in a New Year’s Six bowl game.

There is one loss between these two schools and the season and it came as a one-point loss to North Carolina State. If you’ve been betting on these teams throughout the season, you probably bought your family some very nice Christmas presents because both of these teams have been cash machines. Liberty is 7-0 in their last seven ATS and Coastal Carolina are 7-1-1 in their last nine games ATS.

This line opened at Coastal -4 and heavy money came in on the Chanticleers and it has now moved to a much more reasonable -7. At seven points or higher, I would lean Liberty. They have more impressive wins and the one loss came as a one-point loss against a respectable NCSU team. I think it will be a close game throughout so I wouldn’t be surprised if it ends up being a one score game that comes down to the wire.

I will be all over the over. Liberty’s starting quarterback Malik Willis will be back and I see a definite possibility of a back-and-forth shootout. I believe Coastal’s defense is very good but I’m not sure if they’re good enough to slow down the Liberty offense. Plus, it’s always fun to bet an over in a game like this.