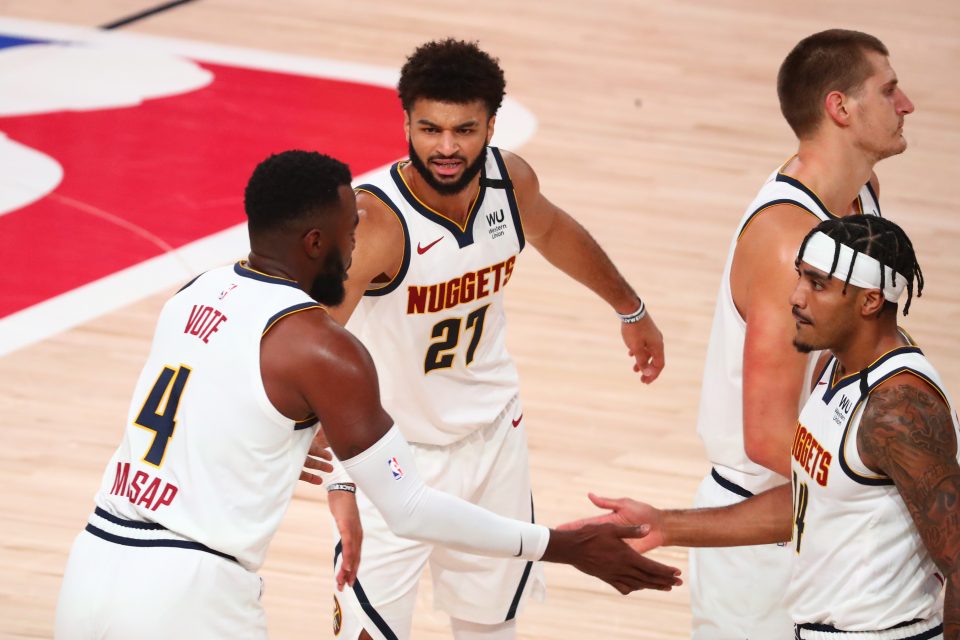 This article was produced by esteemed Nuggets reporter T.J. McBride. T.J. McBride is a writer, reporter, and podcaster who grew up in Southern California, but now resides in Denver, Colorado where he covers the Denver Nuggets and the rest of the NBA.

The Denver Nuggets took their first major step towards contending for a NBA Championship with their improbable run to the Western Conference Finals last season, but that fact is not as indicative of where the Nuggets currently stand after losing three of their five best defenders in free agency.

With Jerami Grant and Mason Plumlee now in Detroit and Torrey Craig in Milwaukee, the Nuggets playoff ceiling took a serious hit, but what does that mean for the regular season? Can Denver still fight for strong seeding despite their offseason losses?

SportsBetting.com has the Nuggets win total for the 2020-21 season set at 44.5 wins, which may seem low, but that is because the NBA is using a shortened 72-game regular season as opposed to the typical 82-game slate. So 44.5 wins, in this case, would equal 51 wins over an 82-game season. At 44.5, the Nuggets win total is the fifth-highest in the league and tied with the Boston Celtics and Miami Heat.

Not sure how to bet the season total? Scroll to the bottom of the story to learn.

Why the Nuggets will hit the over

Denver has a handful of advantages entering the regular season, and none is as important as their depth simply because there are so many more variables that could impact player availability in this day and age of COVID-19 and its brutal impact on the majority of the world.

Tim Connelly and his staff knew how dramatic this reality could be for their 72-game regular season they are about to embark on, so in order to prepare, they added versatility and a plethora of playmakers to try and ease that burden should it become an issue.

Now, if the Nuggets have players missing games due to positive COVID-19 tests or if they end up getting injured due to such a historically short offseason, they have the means to replace that player and still remain competitive in the regular season thanks to having the likes of Monte Morris, Facundo Campazzo, PJ Dozier, JaMychal Green, Isaiah Hartenstein, Bol Bol and rookie Zeke Nnaji all on their bench ready to contribute when called upon.

In addition to their depth, Denver still has quite a bit of roster continuity, which seems strange considering they have seven new players on their roster, including Markus Howard and Greg Whittington, each on two-way contracts. The reason for their continuity despite their roster shakeup is because Denver is returning all five of their starters — Murray, Harris, Barton, Millsap, and Jokic — while also having three of their most important reserves also still on the roster in Porter, Morris and Dozier. Having eight members of the rotation returning is a big deal for a Nuggets team looking to seize strong seeding before the playoffs arrive.

The last aspect that will allow the Nuggets to win a lot of regular season games is the potential of their offense. In their final two preseason games, Denver showcased their newly-implemented offensive philosophies: playing faster, shooting more threes, and replacing tough mid-range jump shots with more buckets in the paint.

Well, Denver is 37-90 (41.1%) from three-point range in their last two games while taking a whopping 45 3-pointers per game. In those two games, Denver only took a total of 19 shots from the mid-range, with the rest of their 162 shots coming in the paint or beyond the three-point arc. That fundamental shift in offensive philosophy could unlock this Nuggets offense, which is truly scary for opposing teams. Denver was the fifth-best offense in basketball last season, but that was not good enough. The Nuggets have the personnel to be the best offense in the league next year and should be putting up 120 points or more per game on a regular basis.

But Denver’s offensive growth does not stop there. Think back to the postseason last year when the Nuggets — albeit without Will Barton III — were largely unable to swing the ball to the other side of the court — away from Murray and Jokic — and still run functional offensive sets without one of their star players. Now, the Nuggets have the likes of Barton, Morris, Campazzo, and Dozier ready to provide playmaking and shooting from all over the floor regardless of what lineup they are playing with, and if any of them end up joining the starting lineup, it does not hurt the number of playmakers on the bench now.

Their sheer number of shooters and creators on their roster gives the Nuggets an entirely different level of offensive versatility. Denver can play small, big, slow, fast, with tons of shooting or however else they want. Oh, and they also have the likes of Porter and Bol improving on a daily basis as they each get more and more playing time. This roster’s offensive potential is truly magnificent and should lead to quite a few regular season wins.

Why the Nuggets will hit the under

Of course, there are also a couple of reasons why the Nuggets could fail to hit their win total and fall short. Murray and Jokic are both historically slow out of the gate, which could hurt more than usual with a shortened season. Plus, while the Nuggets offense might put up 120 points or more with regularity, they might also allow other teams to score just as much against them. If Porter struggles on defense, Harris struggles to stay on the court and Jokic is indifferent on that end of the floor, there is a potential disastrous defensive outcome during the regular season.

In case you are new to sports gambling, the oddsmakers have set the Nuggets win total for the coming season at 44.5. Now that sports betting is legal in Colorado, a sports fan can bet on if Denver will win OVER or UNDER 44.5 games. So it shakes out like this… if you bet the over, the Nuggets will need to win a minimum of 45 games for your bet to cash. Anything less than 45 results in the bet going under.