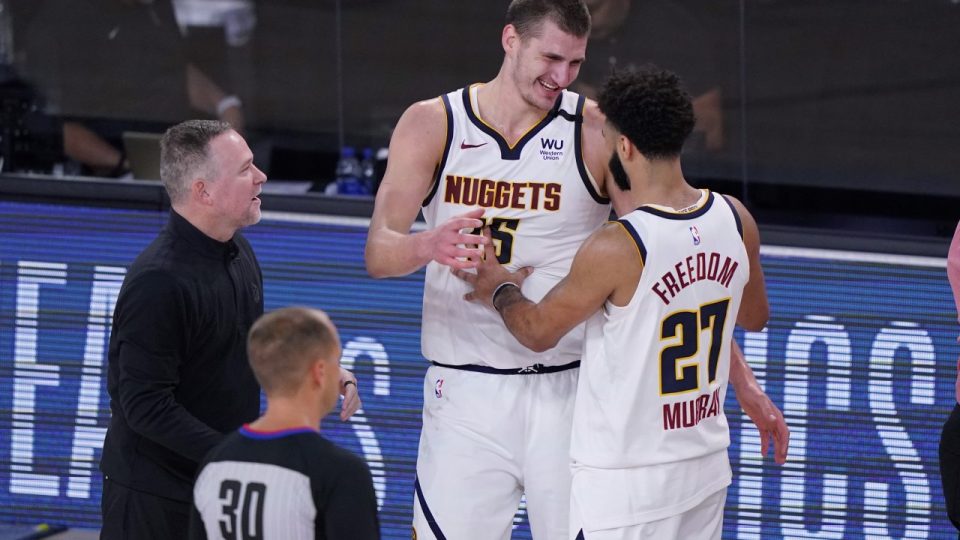 This year’s historic playoff run capped one of the best regular seasons in Denver Nuggets history. To put it into perspective, this year’s winning percentage was the team’s 7th best in their history. However, this season means much more than that, the arrival of Michael Porter Jr. and the explosion of Jamal Murray, as well as Jokic’s consistency, was the news fans were desperately hoping for after a disappointing loss to the Trail Blazers in the 2019 playoffs.

Better yet, there is the understanding that the team is deep, can win games with only seven active players, or even come back from a 3-1 deficit in the playoffs TWICE while missing the team’s third-highest regular-season scorer in Will Barton. This shows just how bright the Nuggets’ future truly is. Yet these milestones have been years in the making. What’s more is it was a team effort, influenced by a few key leaders and role players. So let’s take a look at the hard work these players have put in recently.

Undoubtedly, the two most important players on the Nuggets team are Nikola Jokic and Jamal Murray. While they are young, their leadership and talent are rivaled by few on the team. Jokic was drafted as the 41st pick overall in 2014, and since then, his consistent, go-to nature has kept the Nuggets afloat while the front office has looked to build around him.

As pieces like Murray were placed by his side, he could focus on facilitating the offense rather than being the one and only consistent scorer. While his net rating has decreased in these last few years, it is only because players, namely Murray and Paul Millsap, have been able to take over some of the scoring. In categories like assist-to-turnover and touches-per-game, Jokic has been on an upward trend, highlighting his burgeoning focus on playmaking. This has allowed Murray himself, the other core Nuggets player, to expand his game and become more effective offensively and defensively. Murray’s draft in 2016 as the 7th pick formalized a bright future for this Nugget’s squad. His striking explosion in this year’s playoffs capped a period of growth that has placed Murray on the national stage. 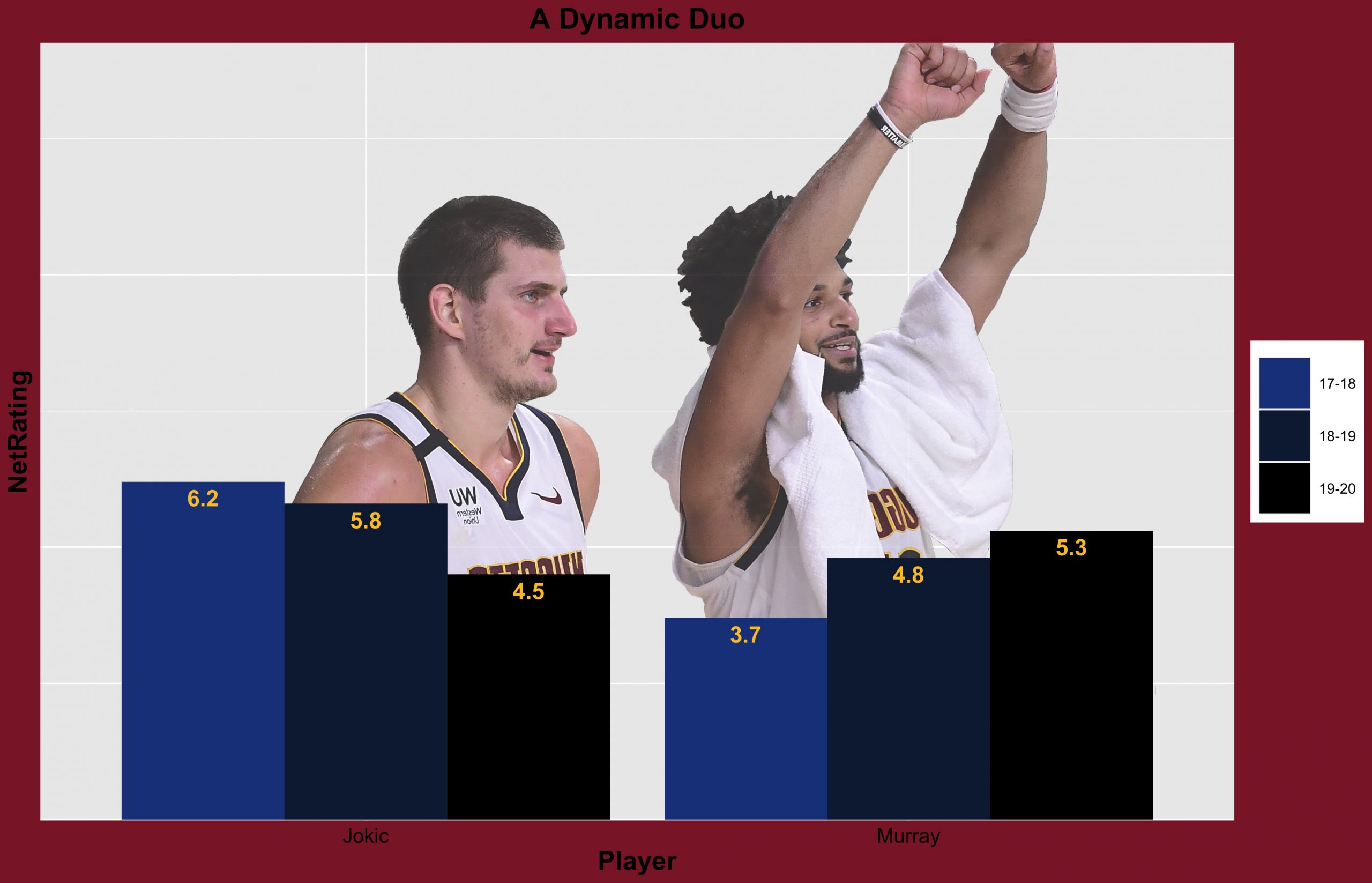 While Murray and Jokic are the foundation of this team, it was the acquisition of veteran Paul Millsap in 2017 that was the catalyst for the Nuggets to unlock their playoff potential. Millsap’s leadership and versatility showed the young team they would need to grow in order to win a championship.

In the 2017-2018 season, the Nuggets were one game, neigh, 6 points, away from reaching the playoffs for the first time in five years. A loss to a Jimmy Butler lead Minnesota Timberwolves team in OT kept them from making this a reality. If you can recall anything from that season, it should be that Millsap was plagued with injury, playing fewer than 40 games of the 82 game season. His absence greatly affected the Nuggets road to the postseason. In the 37 games he played that season, the Nuggets won 22 of those, meaning if he would’ve played the other 45 games of the season, the Nuggets almost certainly would’ve had a playoff berth. Since his signing in 2017, Millsap has lead the Nuggets to win 101 games that he has played. 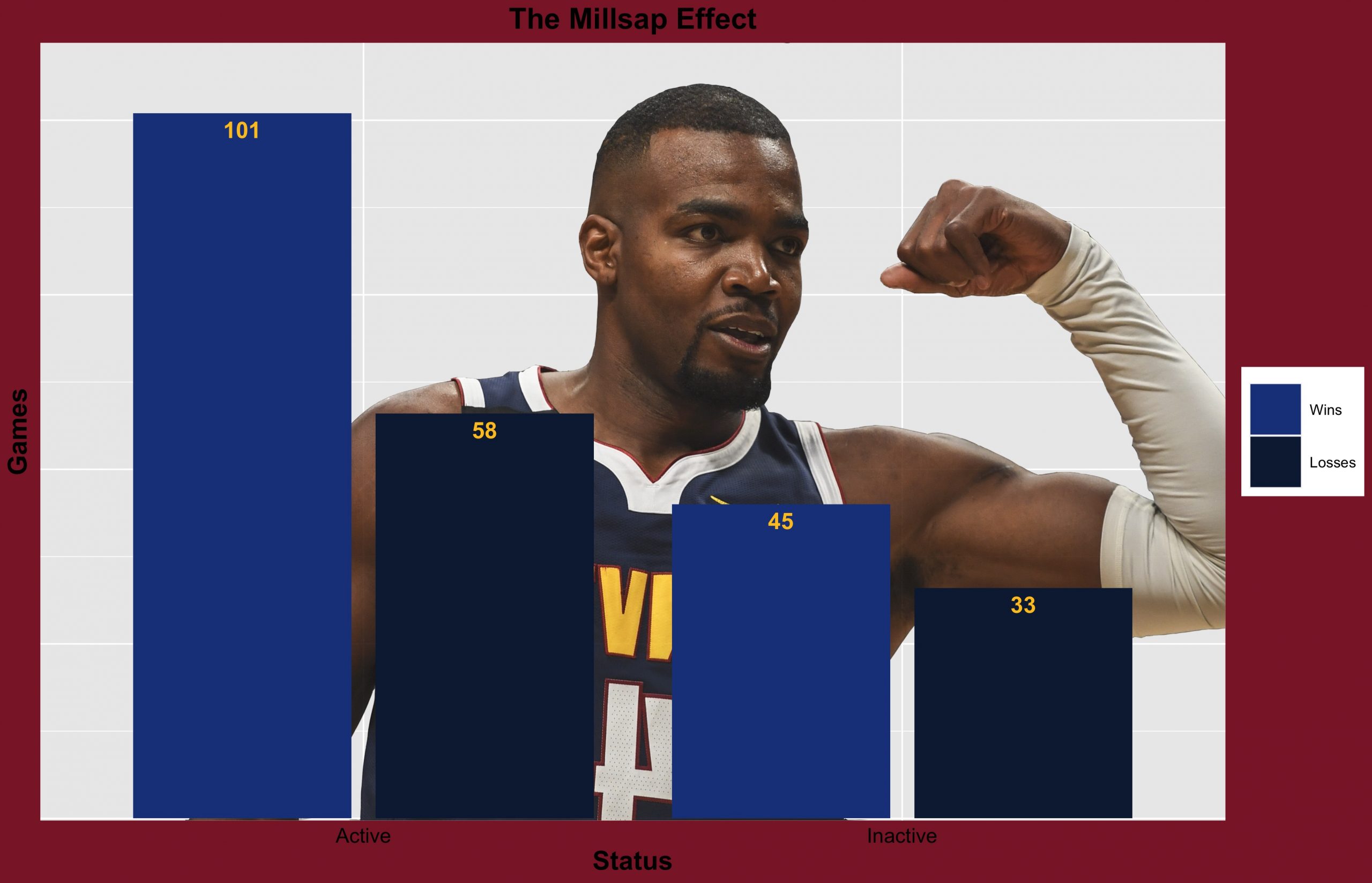 Nonetheless, the 2018-2019 NBA season saw Millsap and the Nuggets play with their full potential, capping the year with the Nuggets’ 2nd best regular-season winning percentage in their history and the first playoff berth in six years. With that season in the books, the Nuggets had shown they are not to be toyed with. They further emphasized their standing all the way to today, with Millsap being key in multiple comeback wins in the 2020 playoff run.

Along with Millsap, Jokic, and Murray, it is important to understand just how influential the rest of the players are. While those three are the main drivers day in and day out, the players that sit beside them are irreplaceable and end up shouldering a huge part of the burden. Considering the 2019-2020 roster, of those who average 15 or more minutes a game, Jokic, Murray, and MPJ are the only three who have usage percentages higher than 20%. 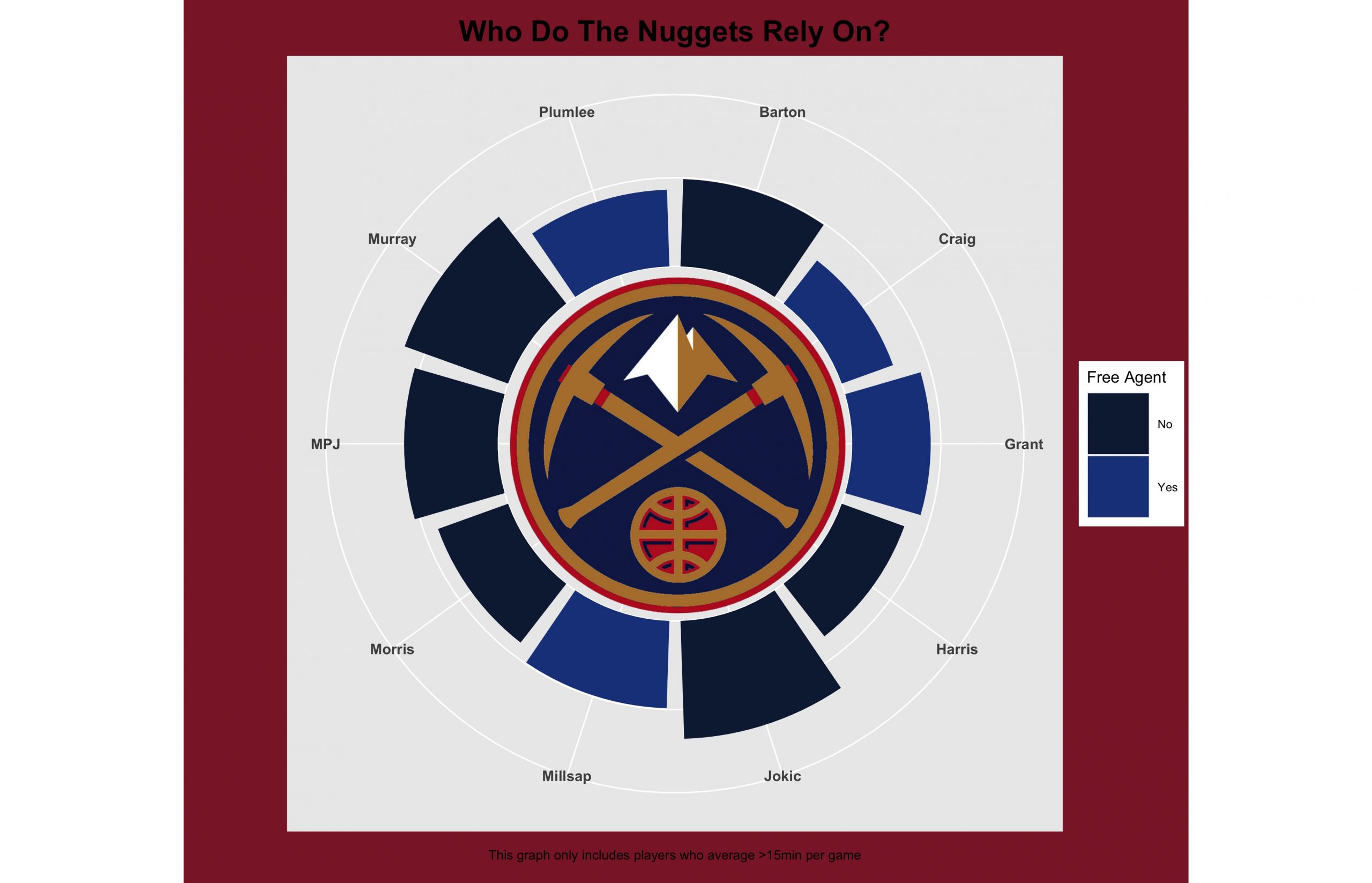 Usage percentages are a measure of how often a player is involved in an offensive play, and for context James Harden, Lebron James, and other All-Star players average 30+% usage. Jokic had the highest usage percentage at 26.6% last season, but for a two-time All-Star and the core part of our team, that is relatively low. Meaning, the possible departure of players like Millsap, Grant, Craig, and Plumlee is even more impactful than on most other teams, and that doesn’t even consider their influence on the defensive side.  Their dependability is what has allowed Murray and Jokic to reach stardom in past seasons.

Fast-forward, and the Nuggets have, in three years, gone from missing the playoffs to being in the conversation for getting into the finals. Not just because of three main players but because the Nuggets work well as a unit. However, this offseason will be key in the Nugget’s search for the golden trophy. 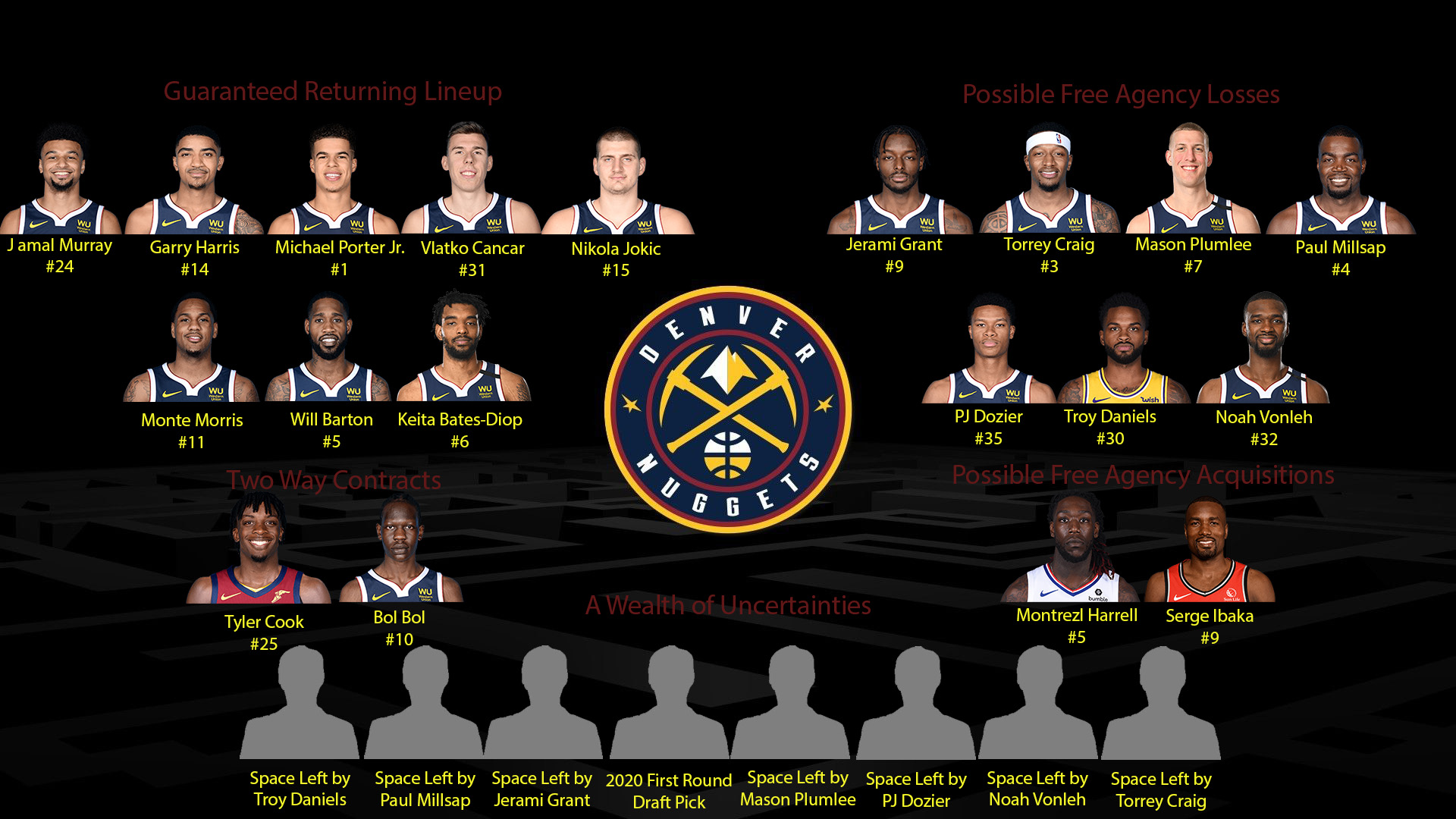 In this weird world, things are about to get even weirder for this Nuggets team as many staples that were key in this three-year conquest may be leaving the team. Mason Plumlee, Torrey Craig, and Jerami Grant are all at the tail ends of their contracts, just to name a few. Most notably, Millsap, who, given his affinity for injury and expensive contracts, is unlikely to return in the same fashion he has in the past. The Nuggets, however, have the opportunity to resign all of them or even pick up new players in the free agency, which starts on November 20th. Let’s take a look at what changes could be coming to the home team lineup.

With the arrival of Bol Bol, a healthy Cančar, and the Nuggets’ ability to use their 1st round pick to bring in more height, spending $14+ million on resigning Plumlee would be a misstep. He has been an important and great player, and in his absence, Denver will lose passing ability and height, but the time has come to part ways.

On the other hand, resigning Torrey Craig would prove to be a cautious, intelligent move with the uncertainty of MPJ’s defensive talent as well as the possibility that Denver loses another defensive asset in Jeremi Grant. Lastly, the resigning of Millsap would be a huge waste of money for 30+ million a year; however, his leadership is worth a lot; therefore, it would be nice to see Millsap retire and join the coaching staff here in the Mile High City; if that is not an option, resigning Paul for a single-digit yearly contract could be a smart move, however, losing him outright, while it wouldn’t derail the team, it is a gamble the team should not take given how young they still are.

Another player briefly mentioned is Jerami Grant, who will be a very hot commodity on the free agency market this offseason but one the Nuggets must resign. Expect thee Nuggets to do everything they can in order to secure his return, especially since they gave up a first-round pick to get him. By resigning him, the Nuggets would have a fairly consistent all-around wing presence, freeing the team up to gamble by not signing Craig, possibly even trading Will Barton, and allowing MPJ to have a larger share of minutes.

As far as free agency pick-ups are concerned, Serge Ibaka could be an ideal candidate to replace Millsap and Plumlee should they not be resigned. The combination of Bol, Cančar, Ibaka would do a great job to fill the void of these big men. While Denver would lose some passing ability from Plumlee, the Nuggets would gain better shooting both close range and 3-point, and he would be a better role model for Bol Bol specifically.

Other good free agency pickups to fill the backcourt would be Montrez Harrel; however, his attitude won’t fit well with the team. That being said, his stats and impact speak for themselves, and should he and the team meld better than expected, his tenacity could be the missing piece to push the Nuggets over the edge. However, Denver would lose height, leadership, and passing ability by going that route. Some other notable free agents to help out would be Marcus Morris and Jae Crowder; however, their expertise is less interior centered, which is where I believe we need the most help. Should Denver fail to pick up any backcourt reinforcements during the offseason, it would require Bol Bol and Cančar to step up in ways that would put a strain on their abilities to perform; however, there is confidence Malone could handle such a scenario.

It is likely that, unless a very enticing and relatively simple move presents itself to the Nuggets, they might lay off any big moves. With at least two of the three previously mentioned names likely to leave, Denver will certainly have to make some effort to replace those players and restore a strong team both with starters and a reliable bench.

With so many uncertainties left to come, it is hard to predict what the future for the Denver Nuggets will be. However, with a talented young core that has learned so much so quickly, one can be sure we will be a force to be reckoned with no matter how the offseason shapes up. With a little bit of rest and luck, who knows, maybe the Nuggets will strike gold.