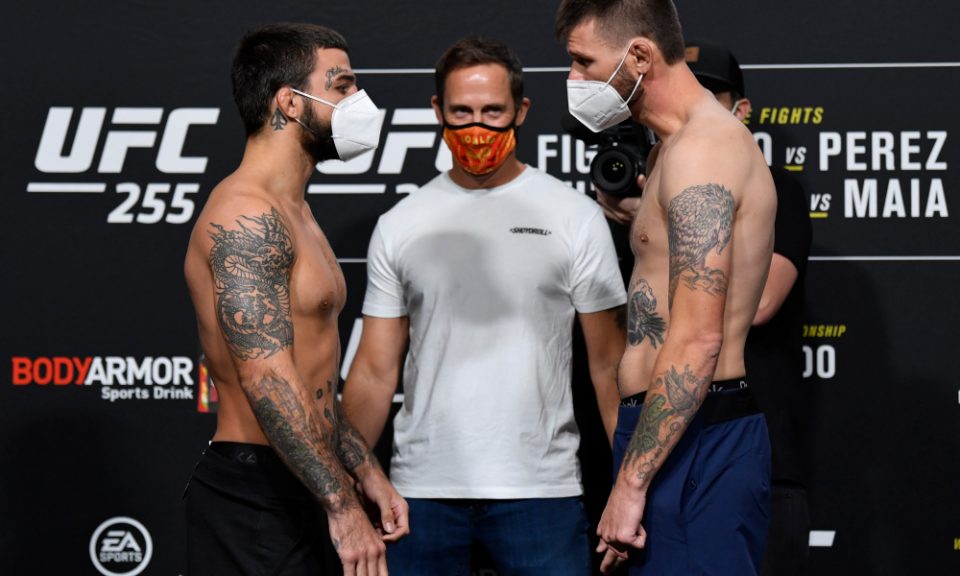 Weight cut woes left a stain on what was otherwise an entertaining week of fights across the MMA landscape. Missing the contracted weight is becoming all too common over the past few weeks, and the frequency across all promotions has gotten out of control.

Yes, I am totally aware that we are in the middle of a pandemic, but as a professional, it is your job to meet that number on the scale in which you signed the contract for. There are times when the body just shuts down and cannot get any more weight off, but if that point comes with more than a pound past the allowance, that means an error was made.

The error could’ve been being too far out from weight when agreeing to the bout, not being disciplined with the diet, messing up the waterload, starting the ‘cut’ process too late, or also just not having the mental fortitude to sit through the suck of those intense sauna or tub sessions. One way or the other, it is not right to miss weight when your opponent makes it, and the 20 and 30 percent of purse penalties are proving to not be enough of a deterrent.

Fighters like Mike Perry, who missed weight by 4.5 lbs, said in an interview with Helen Yee Sports that he was happy to call up Tim Means’ camp to concede the 30 percent of his purse to not have to continue cutting weight. It can’t be that easy. Especially when someone like Perry frequently posted videos of himself scarfing down cheeseburgers and pizza during camp. Not too long ago, Perry made the claim he had the ‘best physique’ in MMA, well Saturday night, he was flat and soft in the middle.

The LFA also had two glaring examples of fighters missing weight. One fighter stepped on at 212 lbs for a 205 lb fight, The other was a featherweight who missed by more than 2.5 lbs, and this sparked a confrontation between the two Brazilian opponents.

It is time to up the ante on the penalty for missing weight. I try to never present you all with a problem that I do not have a proposed solution for, so hear me out on this one. To give credit, I first heard this root concept by Jon Annik of the UFC broadcast team, but I have added a slight modification to it. If a fighter misses weight by more than one pound past the contracted weight, they are fighting for a No Contest at best and face a fine of more than 35 percent within that pound. Most athletic commissions allow a one-pound allowance, this remains in place.

That was a word soup, I know, so hopefully, the following provides a clear example:

This is the base concept for my proposal, and it is far from perfect, but at least it levees a stiff penalty that can deter fighters from missing weight so frequently. Hitting someone in the pocketbooks certainly hurts, but jeopardizing their record is even more severe. I can all but guarantee that if you start taking wins off the board, people will honor that commitment to make weight more seriously.

As a whole, UFC 255 knocked it out of the park for entertainment value. When the fight that jerks the curtain on the prelims delivers action that wins the bonus for Fight of the Night, the table is set for a great night.

This was also a historic card as not only was this the first card that two sisters fought on, but it was also the first card that two sisters won on. Antonina Schevchenko earned a performance bonus for her dominant TKO victory over Ariane Lipski during the prelims before her little sister Valentina defended her women’s flyweight title for the fourth time against Jennifer Maia. Valentina lost a round for the first time in ages but proceeded to pull away and dominate the fight in the championship rounds.

Once again, there was a suspect decision on the card as well. All three judges scored the Dalby vs Rodriguez fight in favor of Dalby with two 29-28s and one absurd 30-27. The 30-27 means that that judge did not see a single round in favor of Rodriguez, which is preposterous. The commentary team was split going into the third, with Daniel Comier believing that a case could be made that Rodriguez was up two rounds to none.

Joaquin “Newmansa” Buckley followed up on his knockout of the year candidate against Impa Kasangany with a vicious knockout over fellow LFA veteran Jordan Wright. Joaquin Buckley is an incredible young talent with highlight-reel power. He’s only in his mid-20s and he has got the look and charisma of a future star. He fell short in his UFC debut after getting stopped by Kevin Holland, but it is not like Kevin Holland was a short-order considering that was one of his four wins thus far in 2020.

What we have not seen out of Buckley is what happens when his dance partner is a high-level grappler that will not stand and bang with him. He carries a LOT of muscle mass, so how will the endurance hold up through grueling clinch exchanges or after having to get back up after being taken down? Even if you get right back up after being taken down, that still uses a lot of energy, especially when working up off of your back. Buckley has also fought strikers that have stayed in range to where he isn’t swinging and missing a lot — the fatigue factor is much greater when punches are missed completely, which is something that trap-setting strikers who use evasive defense tactics will present him with.

He has real beef with longtime UFC veteran “The” James Krause, and it appears both men are game for the fight. All of those questions surrounding Buckley would likely be addressed by the BJJ blackbelt and smooth moving tactical striker with a rich fight IQ in Krause.

The Battle of the Brandons had a freak ending to it when Brandon Royval’s shoulder popped out of socket during a scramble and he tried to put it back in place during the final seconds of the round. Royval was unable to get it back in place before Brandon Moreno was able to land enough strikes for referee Marc Goddard to stop the action with one second left in the round. Had Royval made it through the round, Coach Marc Montoya would’ve been able to pop it back in place for him to continue.

With this fight being labeled as a #1 contender fight for the next title shot, Moreno was quickly rebooked with a title shot next month on UFC 256.

As a long-time fan of the sport, minus a couple of bright spots, it has been a rough few weeks for fan favorites from yesteryear. This week that moment came when former UFC and PRIDE champion Mauricio ‘Shogun’ Rua was forced to tap to strikes at the hands of Scotland’s Paul Craig. This was a rematch following their Draw back in November 2019. Shogun has gone 5-2-1 since 2015, but at 38-years-old, his performances have reflected that of an aging fighter. According to UFC president Dana White, it is time for the legend to truly consider hanging the gloves up.

We already hammered on Perry’s missed weight, so this will be brief. He looked the best he ever has as a grappler, but he also looked the worst he has ever looked in terms of his striking. He just wasn’t sharp and Tim Means was. Means had a volume-heavy output and stuck his jab over and over en reroute to the victory.

Women’s flyweight champ Schevchenko has reached the level of dominance now where anytime she is presented with even the slightest adversity, people lose their minds over it. This has happened with Khabib, Jon Jones, and Floyd Mayweather in boxing. Jennifer Maia winning a round against Valentina is one of those rare occurrences in the last few years that she has faced any extreme adversity. After losing that round though, she doubled down and dominated the rest of the contest.

What can we say about Deiveson Figueiredo other than this man is must-see TV and he’s a leading candidate for Fighter of the Year — so far. Figgy was able to get in and out of his first title defense against challenger Alex Perez with a guillotine choke submission within the first two minutes of the fight.

It wasn’t so much the submission itself that did it for me, but the sequence leading up to it that had me impressed. Perez started strong and he had a great setup on a single-leg takedown that a fraction away from being executed. The only problem for Perez is, the champ is a very accomplished grappler who countered the single-leg by dropping down and attempting a heel-hook. Perez did defend the leg-lock well, but in the process left an opening for the blackbelt to snatch his neck up for the choke and ultimately the finish.

As mentioned, Figgy has a quick turnaround and will be facing Moreno on December 12, just three weeks from now. This has to be one of the shortest gaps between title defenses for any champion in UFC history.

Neither fighter is returning to their home country in advance of the fight, with the hope to reduce the risk of anything COVID-related coming into the equation, whether it be illness itself, travel bans, etc.

Whether this is the shortest time in between defenses or not, it is huge for the division to see so much activity on major cards from top contenders considering we are less than two years removed from it being on the chopping block before Henry Cejudo saved it when he beat TJ Dillashaw on the first card of the ESPN era.

The flyweight division is alive and well.