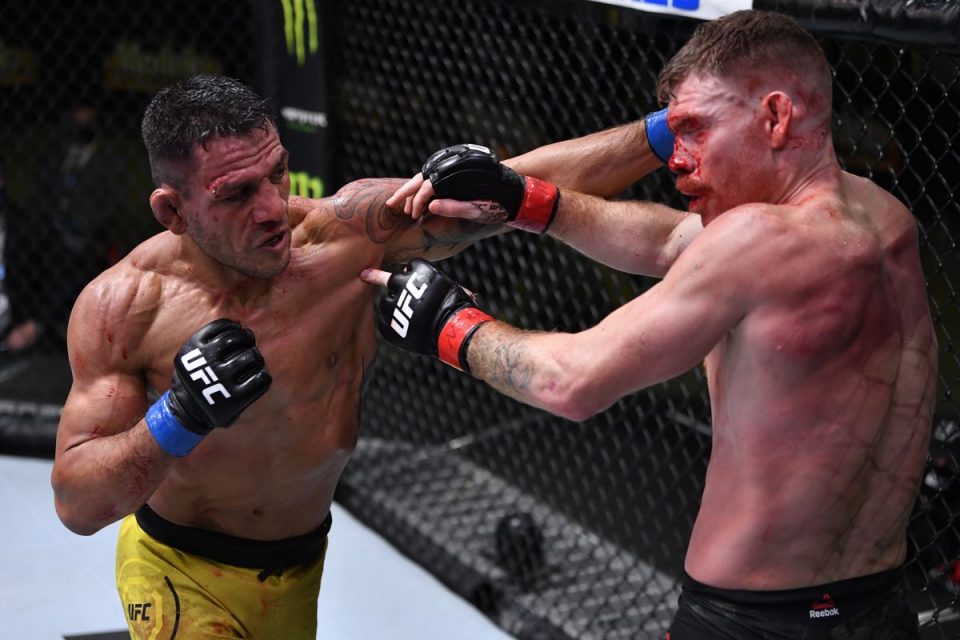 This last weekend, the matchup between Rafael Dos Anjos and Paul Felder certainly saved the entertainment value for the UFC main event, especially given Felder stepped in on just five days’ notice. However, it was not without a little controversy.

When the official scores were read out as a split decision, fans worldwide were stunned at the 48-47 scorecard from Judge Chris Lee. Hats off to ‘The Irish Dragon’ for putting up a valiant effort, but in no world can any case be made that he legitimately won that fight. No freaking way. Yes, judging is always going to have a certain amount of volatility and variance due to the human element; however, there has to be a line drawn somewhere on what is acceptable.

According to MMADecisions.com, Judge Chris Lee, has been involved in 10 UFC/Bellator split decisions in 2020 and was the dissenting judge in seven of them. Granted, this is one example, but c’mon, man, to have seen the decision differently from your counterparts at a 70% rate in split decisions is alarming. This equates to a rate of difference at 15% when looking at the 2020 resume of 46 decisions for Lee.

This is beating a dead horse at this point, but there has to be some sort of reform to the judging process. There should be a review of each round of scoring by each judge on a card by card basis. If MMA remains on the 10-point Must System adapted from boxing, then judges should be able to comprehensively speak to the logic in their scoring to which those statements are reviewed by the appointing commission. This may not be an absolute fix, but a transparent evaluation process can at least identify trends and outliers.

There are a variety of different routes to pursue in judging/scoring reform, but we will not know what works and what doesn’t until the commissions start to experiment. The Kansas State Athletic Commission deserves a lot of credit for being the first sanctioning body to allow for open scoring during fights. What does this mean? This means that after each round, corners are made aware of what the score is. Yes, the retort to this by many is that a fighter up two rounds will coast the third; however, in reality, the data provided by KSAC for the events they have held support the opposite notion. Since its implementation last spring, KSAC has reported that upwards of 80% of fighters who were winning on the cards at two rounds to none going into the final round closed out the final frame winning the round.

It is still too early to tell what the ultimate outcome of open scoring would be, but at least it is a step in the right direction of innovation.

Khaos Williams made the walk to the UFC octagon for the second time ever in the co-main event after making his debut at UFC 247 in Houston, where he scored a 0:27 KO in the first round.

Well, he may not have topped the finish time from his debut against Alex Morono last February, but he was damn close. This time Williams brought the chaos for a one-hitter quitter at the 0:30 mark in the first round that left Abdul Razak Alhassan stiff as a board.

Now, I do wish for a full recovery for Alhassan, but I’m not at all mad that he got sparked based on the legal issues he’s battled since 2018. For those who are not aware, Alhassan was indicted on two counts of rape charges after going home with two women who had been partying at a bar that he was the bouncer at. The women were 22 and 20-years-old, and he illegally allowed the underage woman into the bar.

This is where the case gets really weird and super suspect. After an allegedly botched investigation, Alhassan was found not guilty. Alhassan did not deny having engaged in sexual relations with one of the women while the other was in the corner intoxicated and unconscious. However, the alleged unconscious woman went to the hospital for a sexual assault examination that stated his semen was found on and inside her. Your guess is as good as mine as to how that happened.

One way or the other, he was an early 30s male with a wife and a kid who snuck an underage girl into a bar, then proceeded to take the intoxicated women back to one of their homes and engaged in an entanglement.

Don’t Call It A Comeback

Sean Strickland was back in action for the second time in 15 days, where he put on yet another dominant performance. This time, on short notice against Brendan Allen, who was originally scheduled to face Ian Heinisch the week before, Heinisch popped for COVID-19 on fight day, which freed Allen up for the following week.

Strickland was involved in a motorcycle accident that nearly caused him to lose his leg. After two years of recovery, Strickland re-introduced himself to the 185 lb. division with authority.

After getting about as dominated as one can possibly get in a fight against Khamzat Chimaev on Fight Island in July, the Irishman showed a lot of heart in his follow up outing against Alex Morono.

Morono clearly won the fight, but McKee stayed in his grill for 15 minutes. Morono needed the bounce-back win after getting slept by Khaos Williams earlier in the year.

Moral victories don’t show up on your record, but after a demoralizing loss like the Khamzat fight, it was good to see the 25-year-old McKee fight hard instead of being completely gunshy.

Switching gears to Bellator MMA for a minute, Aaron Pico rattled off his second KO victory in a row last Thursday and let out an emotional outburst following the finish.

Pico is undoubtedly an incredible talent with high-level wrestling and F-U power in his hands. Pico’s biggest problem is his willingness to get into a firefight with a glass jaw (see Henry Corrales and Ádám Borics fights).

Pico is only 24-years-old, but those devastating knockouts may haunt him as his career moves along if he doesn’t exercise a little more caution as he begins to climb the ladder in the Bellator ranks. Personally, I would love to see Pico implement more of his ground game, but some fighters will live and die by the sword.

As a whole, the entertainment value was there, but both cards were decimated by weight cut issues and COVID cancellations.

Hopefully UFC 254 this Saturday stays intact because there are a few killer matchups that I have my eyes on.

Tune in for The MMA Plug presented by DenverSportsBetting.com Wednesday night at 7p MT to hear my breakdown of the card.