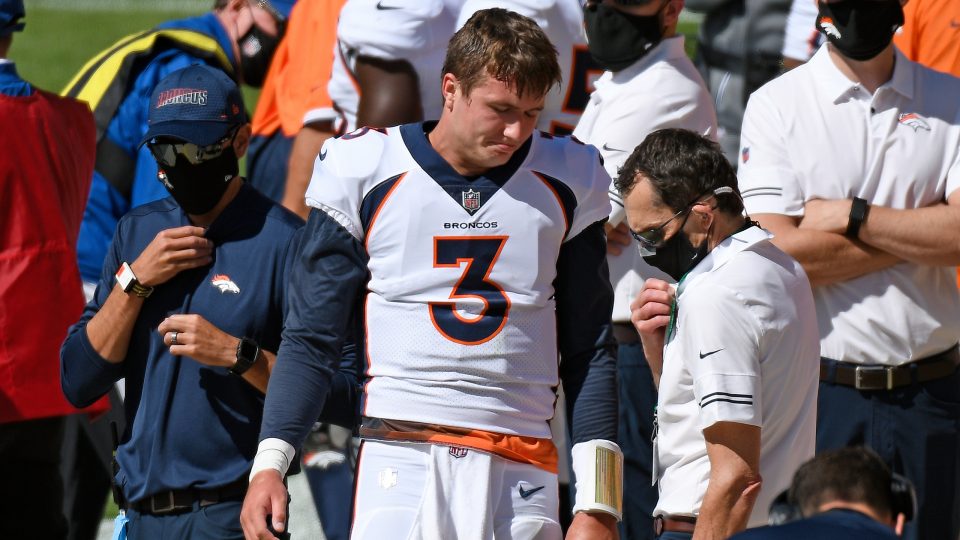 The Denver Broncos had a lot of questions coming into the 2020-2021 season, and among one of the biggest, was if the young Drew Lock could take the keys to the franchise and drive it headlong into the future. Perhaps the expectations weren’t unreasonably high for an already disenchanted fan base who have missed the playoffs the last 4 years in a row and wanted some semblance of playoff contention. The total for the Broncos wins at the start of the year was set at 7.5 wins.

It also wasn’t long ago the sports radio superstar Colin Cowherd was previewing his list for this seasons upcoming MVP.

Where are we with Drew Lock as we approach the end of Week 7 in the NFL?

The Broncos now sit at 2-4 through 6 weeks, and the troubling trend is Drew Lock has one of the lowest QBR’s in the entire league at 29.0 per ESPN. Tag-team that up with a completion percentage of 55.9% and it won’t make many fans feel confident either.

This perhaps is a worst case start to the season for Drew Lock, missing games to injury, bad decisions leading to turnovers, and an offense with is tied for 2nd worst in the NFL in total touchdowns (11).

Drew Lock is 23 years old and is one of the youngest starting quarterbacks in the NFL, his growth and maturity is to be expected, his post-game interview after losing in another blowout to the division rivals KC Chiefs is one that makes Broncos fans reluctant to throw in the towel on such a young talent just yet.

Drew Locks responded on what went wrong during the 43-16 blowout loss with, “I can play a whole better, and I’m going to, that’s the thing I’m going to”.

Drew is taking full credit for execution issues on the offense and doesn’t blame the defense for calling them out. Drew Lock admits to his judgment issues and understands other players frustration on the other side of the ball.

The Money On Lock.

Drew Lock came into this year 25th in the league in MVP odds at +7000 and it’s safe to say those bets are off now, but the most important factor is his ability to get the Broncos wins. The Denver Broncos have to get ready for the LA Chargers this Sunday who have the same 2-4 record and reside with the Broncos at the bottom of the AFC West. The Broncos remain underdogs again at (+3) against the Chargers but look for Lock to bounce back in week 8.