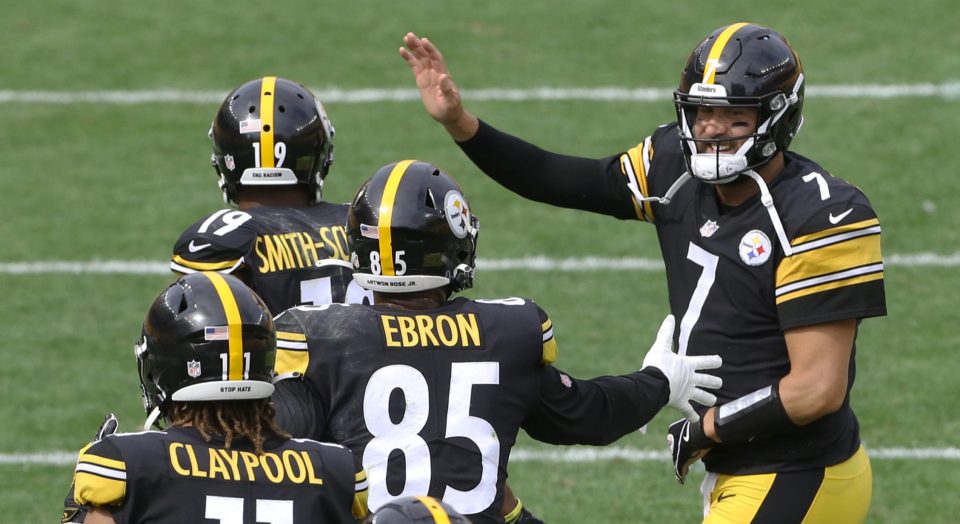 Week 6 of the NFL season is here, and to get you prepared for the full slate of betting, the Most Underrated Podcast crew ran through their favorite picks against the spread in this weeks‘ Heaters segment.

Thomas and Dallas each pick five games against the spread every week during the NFL season. Thomas is 16-3-1 ATS, and a Dallas is 14-5-1 ATS so far this season!

Let’s take a look at who the fellas like this weekend.

I say this all the time… I value stud receivers in the NFL more than stud running backs. Case and point here…

Atlanta is struggling mightily without their top wideout in Julio Jones, meanwhile, the Vikings didn’t miss a beat when Alexander Mattison replaced the injured Dalvin Cook on Sunday night.

The Vikings’ greatest advantage in this game, however, will be Adam Thielen & Justin Jefferson against the TERRIBLE Atlanta cornerbacks. The Falcons haven’t been able to cover anyone all year, so I don’t see how they’ll be able to stick with the two dynamic Minnesota wideouts

Finally, Dan Quinn, the long-time Falcon coach was fired Sunday night, which I think will depress the Atlanta locker room a little bit. The players fought hard for Quinn to keep his job late last year, but they failed him this time. Without much time to make adjustments & with Julio still banged up regardless if he plays, I think the Vikings will too much handle for ATL.

I like betting against injured quarterbacks because the sportsbooks never factor that into the spreads. And why would they? The public has no idea what’s happening behind the scenes. They just see that Mayfield is playing, so they’re not paying attention to the fact that he just had X-rays on his ribs & he’s not 100%.

Cleveland’s Myles Garrett & Olivier Vernon dominated the Colts O Line last week, but they took advantage of missing left tackle Anthony Castonzo. They won’t have as easy of a matchup this week, plus Roethlisberger has been getting the ball out of his hand extremely fast this year trying to avoid another injury.

That brings me to my final point.. With the emergence of Claypool last week, we’ve now seen Juju, Diontae Johnson & Chase Claypool take over to lead the team in TD’s & catches in separate games this season. How are the Browns going to be able to cover them all? You move your best cover guy in Denzel Ward over to match up with Claypool & Juju is gonna torch the other side. We didn’t even get into Connor & the running game. I like the Steelers minus the points at home

Joe Burrow had a rude awakening last week. He did well against a couple 1-win teams in the Eagles & Jags, but Baltimore provided a much tougher challenge. Burrow was a mess as he was nearly responsible for five turnovers, he took countless sacks and generated just three points in the process.

This could be another tough one for Burrow as his offensive line is miserable outside of left tackle, Jonah Williams. The Colts will be able to pressure him heavily with their talented defensive line & the front will also be able to lock down Joe Mixon, as it’s been very difficult to run on Indianapolis.

Lastly, keep in mind that Indianapolis is a very good team going into a bye. I like that sort of dynamic, especially with the Colts coming off a loss. They’ll be very focused to rebound.

I don’t feel great about rolling with the Dolphins in back to back weeks to cover a big number, but I’m not sure we’ve seen a team or coach or culture as bad as the Jets in a while.

Conversely, yes Miami is 2-3 but I don’t think they are as bad as people think. The Dolphins three losses have been to the Seahawks, Bills & Patriots who are a combined 11-2 at the moment. The wins were both blowout victories against the Jaguars & 49ers and The Jets are 10 times worse than either of those squads. Being that Miami has shown they can score in bunches AND blow teams out, I’m rolling with them again this week

We’re getting great line value with the Bucs as the underdog in this game! Tampa Bay -3 was the advance line on this game and now the Packers are favored by 1?? Why because the Buccaneers didn’t have a single healthy receiver & blew the lead to a 3-1 Bears team two Thursdays ago?? Okaayyy, well we’ll def take it!

Tampa didn’t have any healthy starting receives in that game as Godwin was out, while Evans & Scotty Miller were limping on & off the field all night. With a week-and-a-half of rest, the Buccaneers should be much healthier heading into this contest.

Jacksonville has lost 4 straight and they’ve also given up 30+ points and failed to cover the spread in each of those games. Myles Jack questionable for Week 6. Allen and Jack missed Week 5’s loss to the then-winless Texans and the Jaguars allowed almost 500 yards in just 58 plays.

With Detroit coming off a Week 5 bye, they’re healthy and going against a team who just let Deshaun Watson throw for a season-high of 359 passing yards and allows the highest completion rating to opposing QB’s at 76%! Look for a big day from Kenny Golladay and while Adrian Peterson is questionable with illness look for D’Andre Swift to be a feature back and help boost the offense against a bad run D.

Detroit impresses after a Week 5 bye and Matt Patricia gets off the hot seat momentarily.

The Steelers are off to their best start ever in the Mike Tomlin-Ben Roethlisberger era. Pittsburg currently sits a top in the league at stopping the run. With Claypool scoring 3 td’s last week, we haven’t even seen the Steelers at their best collectively. With Juju, Conner, and recently added Ebron, Big Ben has some great weapons.

The big problem is that the Browns are banged up all across their roster. Baker Mayfield with the ribs, Odell Beckham was held out of practice for “illness”, and missing two starters from their offensive line. The bottom line is the Browns are a running team and the Steelers are one of the tops at stopping the run! They will put constant pressure on Baker and force him to pass and get him and the team out of their comfort zone.

Cleveland, who hasn’t won in Pittsburg since 2003, falls back to reality and loses a tough game on the road.

Atlanta’s inability to finish games this season and a defense that is surrendering 32.2 points and 446.0 yards per game.  Atlanta has seemingly lost its “killer instinct”. Atlanta also has some injuries/limitations such as defensive tackle Grady Jarrett (back) and defensive ends Dante Fowler Jr. (ankle) and Takk McKinley (groin) were limited in practice.

The Vikings will not have Dalvin Cook, but second-year back Alexander Mattison should keep the ground game cruising, rushing 20 times for a career-best 112 yards last week against the Seahawks. With Fowler and McKinley being limited in practice, they will have a hard time covering the likes of Thielen and Jefferson.

Minnesota continues to dominate time of possession and as Zimmer says, “we’re getting better each week”.

The Packers are undefeated this season, both straight up and against the spread, and now coming off a bye week. They get their greatest weapon back in Devonte Adams this week. They’ve already had two big road wins (Minnesota, New Orleans). A well balanced running and passing game this week bodes well for the rested Packers.

Tom Brady ranks 21st QBR, 15th Adjusted net yards per attempt, and 19th net yards per attempt, respectively. Tampa Bay committed 11 penalties and its line allowed Brady to be sacked three times against the Bears Week 5. A big problem for the Buccaneers this week is nose tackle Vita Vea, who broke his leg with less than two minutes left against Bears. Brady should get a healthy Godwin and Evans, but will he have enough protection?

With Aaron Rodgers playing at MVP caliber, team rested from a bye Week 5, and getting back their biggest weapon Devonte Adams the Packers are looking great to take another road victory!

Tennessee coming off a short week after a week 5 hammering of the Bills. Historically, the Titans tend to get burned over the top by Texans wide receivers. Fuller and Cooks are both healthy this week. Derrick Henry is only averaging 3.7 yards in comparison to 2019 where he averaged 5.1 per carry. Also, look out for Bradley Robey who held DJ Chark to 16 yards and 3 receptions.

After firing head coach/GM Bill Obrien the Texans got a much-needed spark after starting the season 0-4. Houston put together a well-balanced attack including Watson throwing for over 300 yards and David Johnson having his best game since joining the Texans. With the receiving core of Cooks and Fuller, the Texans are starting to build a nice air attack.  This is a must-win for the Texans to remain in any conversation of the postseason.

With limited prep on the Titans side and continued Covid concerns, I’m taking the fighting dogs Texans.