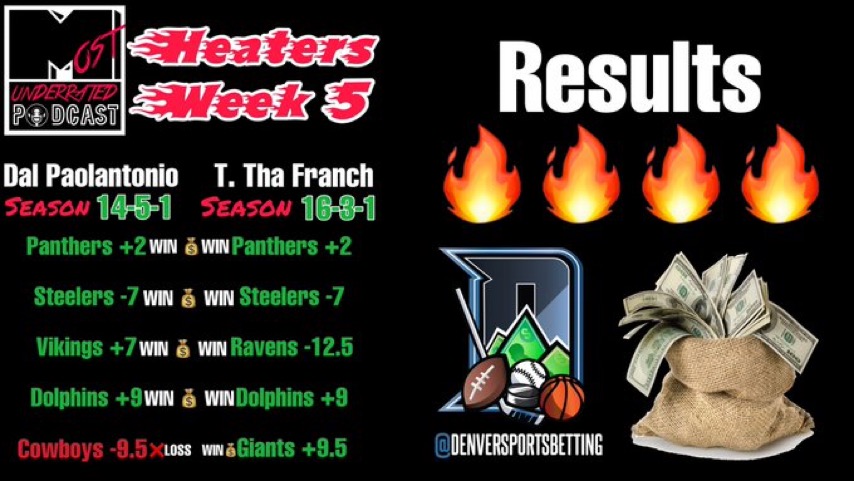 Week 5 of the NFL season is over and done with, which means it’s time to take a look at how the Most Underrated Podcast crew did against the spread.

Let’s see how things played out over the weekend…

Both of the guys were on point for Week 5, with just ONE miss between the two! The fellas are now a combined 30-8-2 against the spread this season!

The Dolphins pick was a total lock from the start of the game as the 49ers continue to try and pick up the pieces from their Super Bowl hangover. Both of the guys were also spot on with their Panthers and Steelers picks. Pittsburgh made things a little dicey there at the end but covered nonetheless.

They did disagree about the Giants-Cowboys game, and Thomas wound up prevailing as New York lost the game but covered the spread. Nonetheless, another fantastic, profitable weekend from the Most Underrated Podcast crew.

Check out the Most Underrated Podcast live every Monday and Thursday at 12:30p MST or catch up anytime on demand.

Denver Sports Betting is excited to partner with the Most Underrated Podcast for their Heaters segments moving forward, so be sure to follow their work across social media platforms and catch the show twice a week on YouTube!

Thomas and Dallas do a phenomenal job of fusing sports, betting, and culture into their show. We look forward to developing revolutionary content with them for the Denver Sports Betting community.