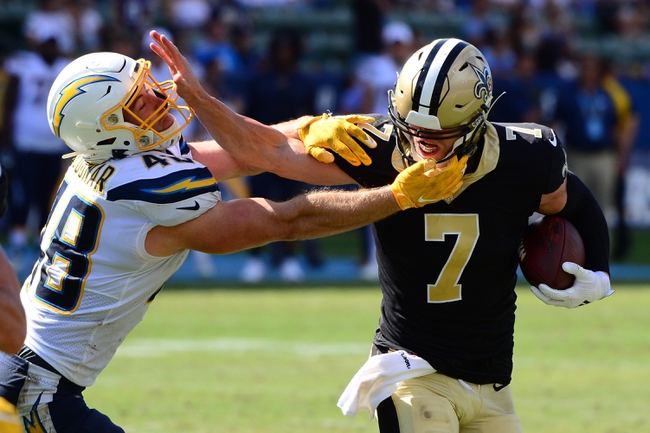 Week 5 of the NFL season wraps up with a matchup between The AFC West and The NFC South when the Los Angles Chargers travel to New Orleans to face Drew Brees and the Saints. Kick off is set for 6:15 MST.

Denver Sports Betting is here to take a look at the action slated this evening from a betting perspective.

The matchup between these two teams is an intriguing one as both teams’ quarterbacks are playing from the opposite ends of the spectrum in their careers. New Orleans came off of a week 4 victory against the Detroit Lions winning 35-29. The Saints are 2-2 on the year with their only other victory coming against Tom Brady and the Bucs in their first game of the season. Brees has 1,006 passing yards for 8 touchdowns and 2 interceptions on the year coming into week 5.

Inversely, the Los Angles Chargers are 1-3 on the year and have lost their last 3 games after winning in week 1 against the Bengals. The big story for the Chargers is their emergence in the rookie Justin Herbert who’s thrown for 931 yards in his first 3 career starts which is among second best in league history. The Chargers have lost 3, one-score games to 3 very good teams, and even took the mighty Chiefs to overtime before losing by a field goal.

Justin Herbert is still looking for his first career win and will get a chance at a porous Saints defense, while Drew Brees will be without his biggest weapon in Michael Thomas after he is being sat for “team discipline” measures after an altercation with a teammate in practice.

#Saints star WR Michael Thomas punched teammate Chauncey Gardner-Johnson during a fight in practice, per sources. That’s why Thomas was ruled out for Monday’s game against the #Chargers for what the club is calling team discipline.

The Saints are 7 point favorites for this game listed at (-7) on the spread against the Chargers (+7) and so far Action Network has 54% of the public bets going towards the Saints.