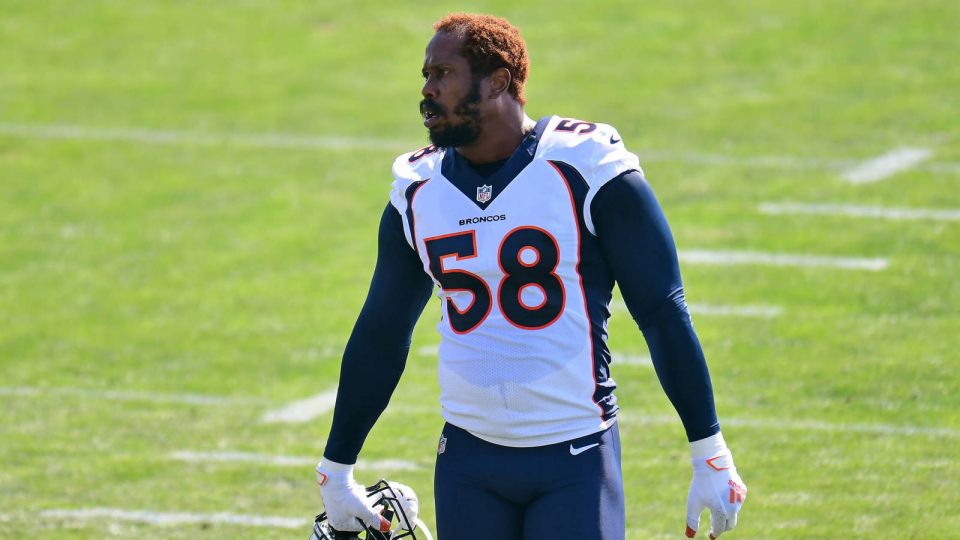 Tragedy struck the Denver Broncos this week. On one of the last snaps of practice, Broncos superstar pass rusher Von Miller dislocated the peroneal tendon in one of his ankles, which will likely sideline him for the entire season.

A typical recovery from this type of injury is 5-6 months, although there is a chance the recovery could take as little as three months, according to Ian Rapaport.

The specific diagnosis for #Broncos star Von Miller is a dislocated peroneal tendon, per me & @MikeGarafolo. Essentially, the tendon flipped over the ankle bone. Best option is usually surgery, with a general recovery time of 5-6 months. Absolute best-case scenario is 3 months.

The Broncos are now looking to play the 2020 NFL season without one of their best players, and leaders in the locker room. To add insult to injury, (literally), Von’s counterpart, Bradley Chubb, has been nursing his ever-recovering knee after tearing his ACL last season.

The Broncos also surprised many when they released veteran linebacker and former team captain Todd Davis. All of a sudden, the Broncos are thin at the linebacker position.

The doom and gloom makes the headlines, but it’s not a reality that head coach Vic Fangio succumbs to.  Denver Sports Betting spoke with our Chief Brand Ambassador and 2x Super Bowl champion Rod Smith about the situation.

“That means there is an opportunity,” Smith told Denver Sports Betting. “Somebody has to come in and play that spot, but you can’t try to be Von Miller, you have to focus on being the best that you could be as an individual. There are several guys who played behind great players that went on to be great themselves with opportunity, myself included.”

Want to win a private dinner with Rod Smith for you and some friends? Click here or scroll to the bottom of this post to enter our sweepstakes!

Smith knows a thing or two about taking advantage of opportunities. The undrafted wideout holds a plethora of franchise records for the Broncos and knows all about the league after playing 13 seasons.

“Find someone, even a committee of guys that can go in there and get some results.” He added.

The immediate guys within the position group to fill in for Von on the field are Malik Reed and Jeremiah Attaochu.

Reed has been impressive for the Broncos during practices and preseason games since being drafted, and had a pair of sacks this past year for the Broncos. Attaochu was a high draft pick by the Los Angeles Chargers in 2014 but has been plagued by injuries earlier in his career. Attaochu has struggled to find a home for the past couple years, but has found a resurgence of possible potential in Denver. He netted 3.5 sacks in the 12 games that he played for Broncos last season.

Denver is expected to add OLB Isiah Irving to the practice squad, per multiple reports. Irving played under coach Fangio in Chicago and will be an option to help make up for Miller’s absence when he joins the team.

Since Millers’ injury, Denver dipped from the favorites opening night against the Titans to underdogs. According to BetRivers Sportsbook, Denver has now actually fallen all the way to +2.5 dogs against Tennessee opening night. The Broncos currently sit at +117 on the Moneyline, but the over/under point total has not changed at 46.

Kickoff Monday night is at 8:20 pm MST at Empower Field at Mile High.