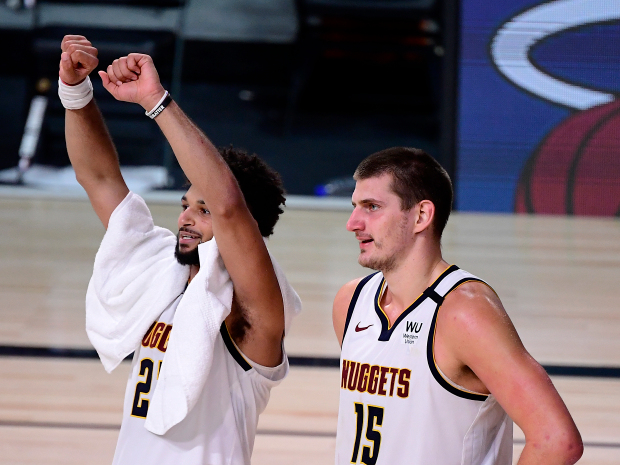 The Denver Nuggets just showed they could run with the best of them, neigh, they can beat the best of them. While the Los Angeles Clippers definitely had their woes, no credit should be taken away from the Nuggets. So how did they prove they’re no joke?

How did they do it?

First and foremost, Jamal Murray found his rhythm. Hitting big shot after big shot late and capping the series with 40 points. Murray showed us he is, in fact, consistent but not on anyone else’s time table. He, just like Jokic, is patient and knows how to get it going when it counts. In games 5-7, Murray shot 54.3% as opposed to 37.5% in games 1-4, a similar story to what we saw in the Jazz series. This performance showcases his consistency down the stretch and cannot be understated.

While we’re talking about consistency, let’s look at the Joker. Averaging 24.4 pts, 13.4 reb, 6.6 ast, on 50.5% shooting, it is obvious he was the captain of the ship in this series. In Game 7, he had a triple-double on a whopping 22 rebounds, the first player in history to do so in the playoffs. He seemed as if he was toying with Harrell and Zubac, who simply could NOT stop him all round. There was one game he did not play well, game 1, which really can be written off as having little to no rest. Besides that, his stellar performance is one for the history books, and he will look to continue to propel us through the playoffs, this year, next year, and for years to come.

It is important to note, however, we would not be here without our role players. Millsap played with heart, grit, and veteran leadership throughout the series and particularly in the last three games when it counted.

While many will say the Clippers simply choked due to the pressure, it is essential to remember that the Nuggets, specifically the three aforementioned defenders, applied that pressure and forced the Clippers to make mistakes they typically wouldn’t have and amplify the mistakes we already knew they would make.

In addition to the Nuggets comeback, which was in no small part due to a good mix of our depth and star players stepping up when needed, Doc Rivers’ woes continue.

He is now 1-10 in games where he has the ability to clinch a conference finals berth. I’m generally not one to make a big deal of these kinds of stats, but it needs mentioning that it is these very stats that stay in the back of a coach’s mind no matter how hard they try and ignore them. It is undeniable that he comes up short in these scenarios with his teams, and he did it again here.

The culture within the Clippers has definitely taken a turn for the better this past year with the money given to Kawhi Leonard and Paul George as well as being favored by many to take home the NBA Finals trophy; but as always does, culture doesn’t change overnight, and the fact that the Clippers have never been to the conference finals in their 50-year history is now set to stay that way – at least for another year. However, it wasn’t just Rivers to blame, as his star boys simply didn’t turn up when they needed to, leading me to my next point.

The Nuggets looked dead and gone down 3-1, but only to those who haven’t watched this team. The Nuggets do not lay down and give up, they just don’t. Two games later, the Nuggets were level at 3-3 after two massive collapses in the 3rd and 4th quarters for the Clippers, and the trend continued in Game 7 at a massive scale.

The intensity that the Clippers played with early on in games seemed to fade, and it came out after Game 7 that many players in the second half couldn’t play more than a couple of minutes before they needed a break on the bench. This is seriously concerning from a Clipper’s standpoint, as they were outplayed through and through by the Nuggets, who had just played a seven-game series against the Jazz while down key players. George has mentioned they need more time to develop chemistry, but it seems a lot more than that from watching that series.

The Future is Now

Emotionally, as with the Jazz, this took me all over the board. Game one was a tough one, game two put me back on the moon, and after games 3 and 4, it was bleak, but it’s hard to not watch a team you’ve grown up watching your entire life, let alone when they’re this exciting.

In the end, it was odd, though, as I thought I was less excited solely because it wasn’t really that competitive in the end of Game 7. The Clippers couldn’t buy a shot, at least against the Jazz, we both struggled to that degree, and it went to the wire. My voice is still very much recovering, and, thankfully, we too as fans now have earned ourselves two days rest as this all starts over again on Friday night.

There’s really no words to describe this feeling, as I’m still in awe as I write this, but I can say without a doubt I’ve never been more proud of a team and to be a fan of a team with this amount of fight and heart in them. No matter the circumstances, no matter what the media will say about this team, no matter what other fans will say about this team, don’t let them put even an ounce of doubt in our team. The Nuggets never give up, even when the cards are fully stacked against them, and I cannot wait to see how this next series unfolds.

Regardless of what happens in this next series, this will go down as one of the greatest playoff runs in history, and I think that is going be hard to refute. I’ll end by repeating words from Coach Malone – “If you don’t love this team, there’s something wrong with you.” PERIOD. Unpack your bags, boys.

As a final note Digging For Gold and Denver Sports Betting would like to wish Coach Malone a happy Birthday, what else could’ve been a better gift than his name in the history books?