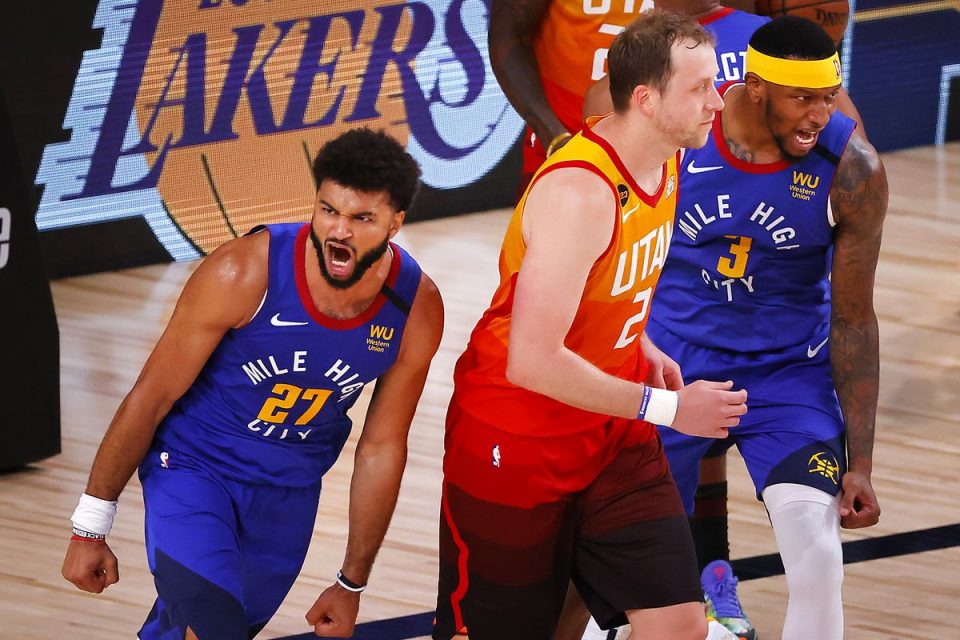 The electrifying Game 7 between the Utah Jazz and Denver Nuggets capped a historic playoff series that is sure to be referenced for years to come. However, early on, things were not looking good for the home team, Nuggets. But with team spirit, a historic round 1 for Jamal Murray, and a late boost from Gary Harris, the Nuggets were able to advance to round 2 of the 2020 playoffs in spectacular fashion.

Being the latest team of 12 to complete a 3-1 comeback, the Nuggets officially etched their names into the history books, joining teams like the 2016 Golden State Warriors and 2016 NBA Champion Cleveland Cavaliers. However, the last team to make such a comeback in the first round was the 2nd ranked, 2006 Phoenix Suns, who came back in surprising fashion to defeat the 7th ranked Los Angeles Lakers.

The Suns, led by Shawn Marion and Steve Nash, would go on to be defeated by the Dallas Mavericks in the Western Conference Finals while the Lakers, led by the late Kobe Bryant, would end their playoff run here. Similar to this year’s Denver – Utah series, however, Phoenix took the first game while losing the next three, from there, the rest is history.

This year’s game one in the Denver vs Utah series went as we all probably expected, ending in an OT win for the Nuggets. With the previous three regular-season and seeding games between these opponents being decided by a combined 11 points, you would’ve been forgiven if you thought games two and three were going to be nail bitters. On the contrary, the Nuggets were blown out in both games by a combined 56 points.

Murray was not going to let the Nuggets go down without a fight, averaging nearly 40 points a game on 56% shooting in the last four games of the series. What’s more impressive is the superstar averaged 16 points in the 4th quarter alone over that same period.

These real-life flurries gave the Nuggets precisely what they needed to propel themselves to the second round and anoint Jamal Murray as one of the team’s key leaders. Without his grit down the stretch, the Nuggets may have found themselves leaving the bubble earlier than anyone had expected.

Like we mentioned earlier in this piece, having Gary Harris available for games 6 and 7 was tremendous. His importance in those games cannot be understated, even if you didn’t see his impact on the stat sheet.

Coach Malone said it himself, “We don’t win this game without Gary.” His ability to poke the ball away from Mitchell in crunch time, although resulting in a missed layup from Craig, helped solidify that the Jazz go no further and allowed for the incredible comeback from Denver.

It was clear from the first game, even though we won it, that some glaring defensive issues needed to be solved. These issues were only emphasized and exploited further by the Jazz, Utah ended up having their way with the Nuggets in any way they wanted.

From easy penetration to unguarded kick-outs to three-point shots and a lack of spacial awareness by Denver, it all accumulated into disastrous performances in games two and three. The Nuggets, however, picked it up in game four, but it wasn’t enough as the team fell just short of clinching the win.

Denver got back into the series from a defensive standpoint by improving on these very issues along with some basic principles of any sport.

The Nuggets got tight on the high pick and rolls ran by Gobert and Mitchell, and made them work for penetration into the paint. Additionally, the Denver defense closed down shooters more often (especially on the 3-point line) and improved their rebounding.

The most basic element of all this comeback? Denver looked like they actually started trying for 48 minutes. There were notable differences in energy levels in games 5, 6 and 7, and Gary Harris did seem to add a spark when he was re-introduced.

Lastly, a little bit of luck. I’m not going to sit here and say we were lights out on defense in Game 7, because the truth is they missed a fair amount of shots they usually make, many of which were from beyond the arc. However, I don’t plan on complaining because I think the Nuggets deserved that comeback and to make history. It seemed the Jazz forgot just how good we could be and simply thought they had the series wrapped up.

Long story short, the Denver Nuggets solidified their right to stay in the bubble and should be damn proud.

Be sure to catch Game 1 of the second round vs the LA Clippers tomorrow (Thursday, September 3rd) at 7 pm MST on TNT and keep an eye out for our betting preview before the game for all your pre-game info.

I’ve said it before, and ill say it again,

What a time to be a Nuggets Fan!

Will Denver have enough energy for Game 1 against the Clippers?