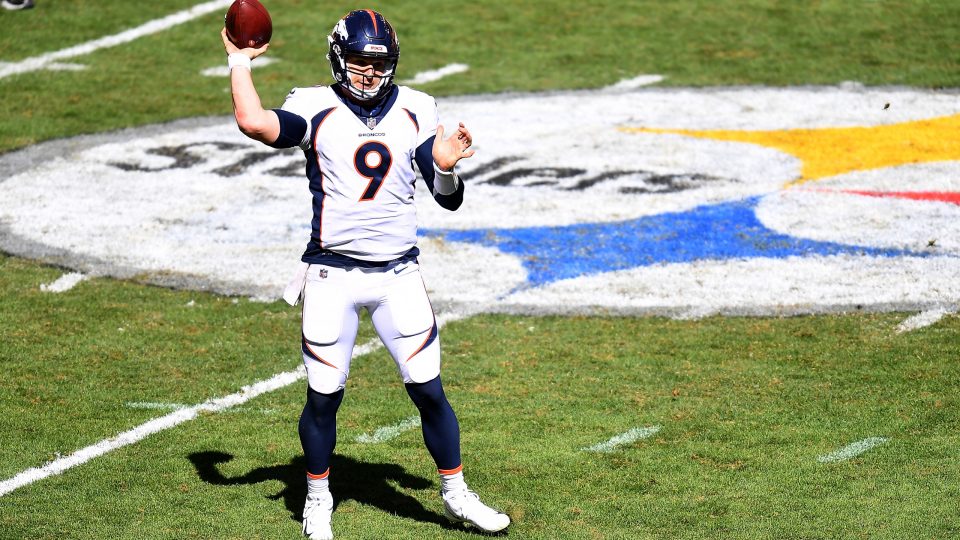 The Denver Broncos welcome Tom Brady and the Tampa Bay Buccaneers into town in Week 3, and with Drew Lock still sidelined for the next 2-5 weeks, Denver’s backup Jeff Driskel will get the start at quarterback.

Drew Lock went down with a sprained AC joint in his shoulder in the 1st quarter of last week’s game after getting hit on a play that eventually resulted in a fumble for the Broncos.

The 27-year-old Driskel took over in his 8th career game and threw for 256 yards and 2 touchdowns in an eventual 26-21 loss to the Pittsburgh Steelers. Driskel is now 1-7 as a starter in the NFL and is looking for his second career win this Sunday against yet another formidable front seven that the Buccaneer’s possess.

Broncos OC, Pat Shurmer was asked during his media availability Thursday what he liked from Driskel’s performance against the Steelers, “What I liked the most is he was tough, he stood in there, and he generally executed what we wanted him to get done” Shurmur said.

Pat went on to admit that “he did have some mistakes, certainly.” With the limited amount of reps that backups get in practice in the week, it should be expected.

“We must play mistake-free,” Smith said. “Can’t give them extra possessions. It’s time for the playbook to get opened up and take advantage of the young talent.”

Currently, there are a few noteworthy props set for the now 8th starting quarterback for Denver since Peyton Manning’s retirement. Here is a list of props for Driskel courtesy of BetRivers Sportsbook

Jeff Driskel gained points for his overall toughness against the Steelers, which will serve him well when the likes of Shaquil Barrett, Ndamukong Suh, and Jason Pierre-Paul come into town. Driskel most certainly doesn’t have the mobility that Drew Lock contains, but he also showed decent poise within the pocket during his Week 2 matchup in Pittsburgh.

The big concern for the Broncos will remain the offensive line. They surrendered a combined seven sacks to the Pittsburgh Steelers a week ago, and with a less mobile quarterback under center and yet another matchup against a top-ranked pass rush, Jeff Driskel will need to make quick and decisive throws, or it could prove to be another long day for the Denver Broncos’ offense.

Game time for the Week 3 showdown between the Broncos and Buccaneer’s is at 2:25 pm MT at Empower Field at Mile High, with about 5,700 fans in attendance.