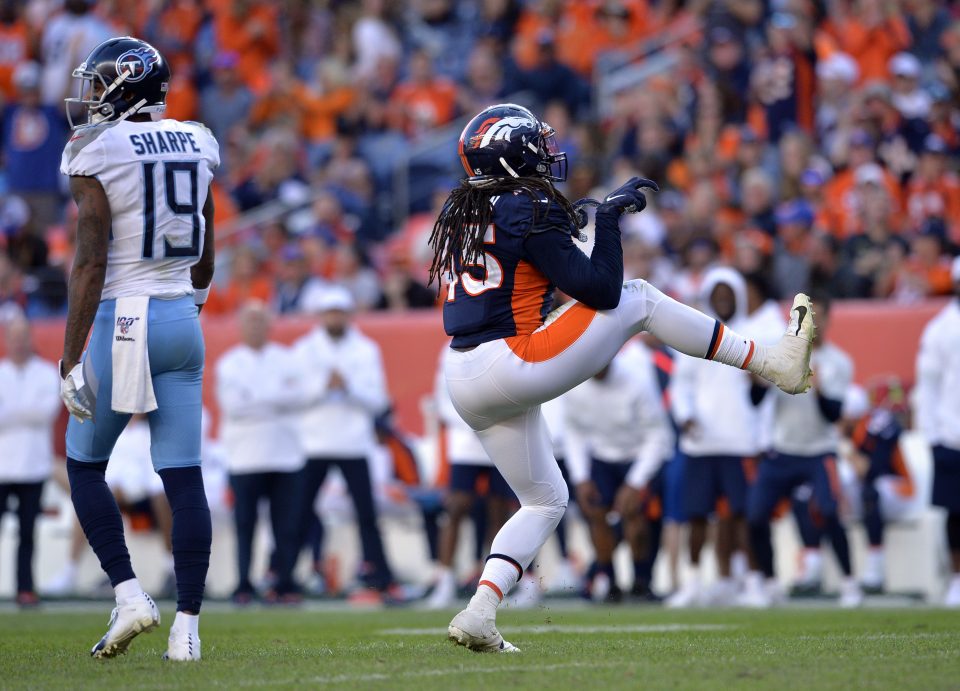 The wait is over, folks.

The Denver Broncos are set to return to action tonight when they host the Tennesse Titans on Monday Night Football. In typical Broncos fashion, they will play in the last game of Week 1 with kickoff set for 8:20 pm local time.

With that, grab your beverages and get ready to fire up your BetRivers betting account because we are in for a long night of football and sports wagers.

BetRivers has some great promotions going on for this game, including a slapper where if you make a $50 bet on the spread of a Monday night game, you’ll get a free bet equal to your team’s final score!

Also, BetRivers Sportsbook will match your first deposit up to $250 when you sign up here and use code 250MATCH. By signing up with BetRivers, you are eligible to win a private dinner with Bronco legend Rod Smith. Click here for more info.

A few weeks back, the Broncos were the betting favorite at most sportsbooks, but the injury to Von Miller has shifted the odds in favor of the Titans. As it stands, the Broncos are the +3 underdog, and 70% of public bets are funneling in on the Titans ATS.

If you are feeling frisky, the Broncos are +145 on the Moneyline, meaning a $10 bet would payout $24.50 should Denver pull of the upset. Click here to get in on that action.

The point total for the game opened at 42 but has since dropped to 41. The public is riding with the over, and 63% of bets are heading in that direction.

This is an interesting game for a couple of reasons. Obviously, not having Von Miller and Bradley Chubb is going to hurt Denver’s defense; however, head coach Vic Fangio earned his stripes in the league for his defensive prowess, so he is sure to have a gameplan to counter the Titans’ offense despite the injuries.

Denver shutout the Titans in Week 6 of last season, 16-0. The loss prompted Tennesse to bench quarterback Marcus Mariota in favor of Ryan Tannehill. After making the swap, Tennesse went on to win seven of their final 10 games and wound up making it to the AFC championship game.

Part of the reason Denver shutout the Titans last season was because they limited Derrick Henry to just 28 rushing yards on 15 carries. It will be hard to do that again, but the Broncos know the recipe to slowing down the Titans offense.

It will be interesting to see how the altitude affects the Titans. Since there was no preseason, this will be the first live game action for many players on both sides of the ball. In a normal year, the Broncos always have a built-in home-field advantage given they play ball a mile above sea level.

The Broncos have been training at altitude for weeks, whereas the Titans have not. Combine this with the lack of practice time, and one has to wonder if the Titans will come out crisp from the jump. The offseason was very different this year, so players’ physical shape is sure to be in question.

Let’s take a look at some notable betting stats and trends ahead of tonight’s game per Covers.com:

As we have seen through the first weekend of play, the opening week of the season can be fairly unpredictable. On paper, the Titans have a clear edge. They are fresh off a nine-win season in which they nearly advanced to the Super Bowl. Tennessee locked up Henry and Tannehill to contract extensions during the offseason, solidifying their offensive core for years to come.

Throw in the fact the Broncos are down Miller and Chubb, and the Titans are not only the more experienced team, but they are also the healthier team.

Drew Lock will make his first Week 1 start, and expectations are sky-high for the youngster to lead Denver back to the postseason. Lock has some new weapons this season, including running back Melvin Gordon and wide receivers Jerry Jeudy and KJ Hamler.

Denver also acquired veteran pass rusher, Jurrell Casey, from the Titans during the offseason, so he is sure to be motivated going up against his former team.

The Titans caught lightning in a bottle last season, and a road back to the playoffs appears to be difficult this year. I wonder how they perform at altitude over the course of the game. It’s a tough Week 1 matchup for the Broncos, but if the defense could hunker down, they could keep it close and potentially cover the +3.