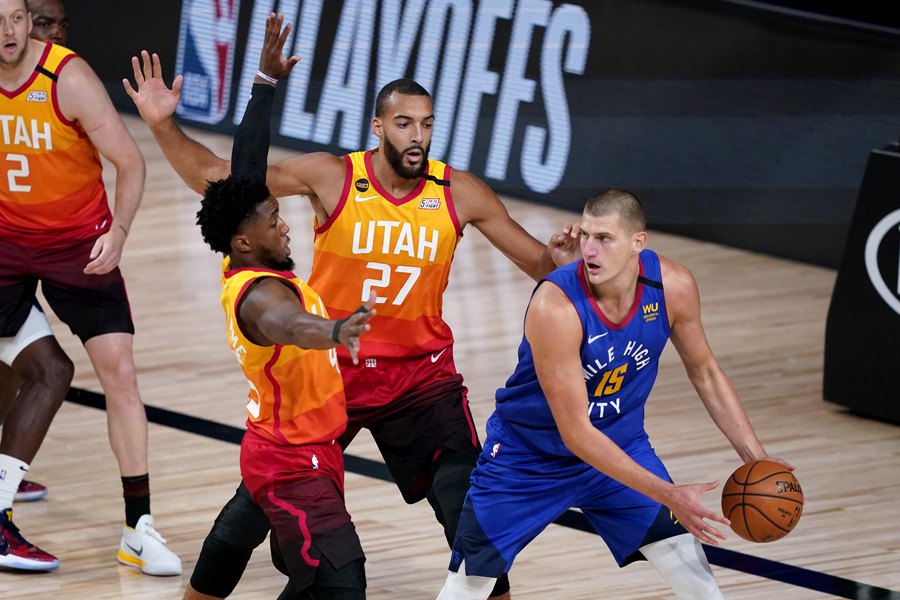 Four games into the playoffs and the Denver Nuggets find themselves down 3-1 as the No.3 to the Utah Jazz. Even to the unkeen eye, there have been some glaring issues in the team that are causing significant problems against the Jazz. It could be the fact that Will Barton and Gary Harris haven’t been able to contribute, but it’s likely something much more profound. In any case, here’s what we noticed:

The Utah Jazz have had their way when it comes to penetration, which is an absolute nightmare because their offense relies so heavily on the kick out to anyone of their sharpshooters. Penetration causes our defense to collapse in an effort to provide help, and then the shooters behind the arc have that much more time to set their feet and line up their shots.

It doesn’t help that the Utah Jazz are one of the leading teams in 3-pt percentage, shooting 43.3% from three. In addition, coach Quin Synder has given free reigns to fire up shots at will from three-point range, knowing how capable his shooters are. This penetration problem allowed by the Nuggets also finds its roots in the pick-and-roll defense, which has undoubtedly contributed heavily to the problem as that is more often than not the first move the Jazz take when crossing the half-court line – a high pick and roll between either Mitchell or Conley and Rudy Gobert. Stopping it at the source has proved a serious challenge for the Nuggets, and unless this sees improvement, the Nuggets will likely exit in the first round.

I don’t know what the hell is wrong with the Nuggets right now, but they have transformed from a fierce, hungry up-and-coming team, to one in definite need of a facelift. Denver looked good through the bubble games despite being down Harris and Barton, but now with the pressure cranked up, the Nuggets have started to fade.

It’s both perplexing and downright depressing to see the Nuggets get manhandled at the hands of the No. 6 seed Jazz, mainly after Denver purposely tanked their last seeding games to solidify a matchup with the Jazz.

Denver made the conscious decision to sit their starters in seeding games against the Los Angeles Lakers and Clippers while LeBron James and Kawhi Leonard were playing in order to back-in to a date with Utah in the playoffs.

The decision was heavily criticized at the time by the Denver Sports Betting staff as well as other local media, although many fans downplayed the potential impact given the Nuggets’ talent and history against the Jazz.

Fast forward, and here we are. The Nuggets are clinging to life down 3-1. What was once a promising season now looks to be heading for a cold, sad ending just as last season did when Portland bounced Denver in the second round.

“We came up a little short, which is disappointing,” coach Malone said after the Game 4 loss. “I am just happy that our guys understood that we are not going to roll over, we are going to fight.”

Coach Malone says all the right things here, but even he seems a bit dejected over the entire situation. Typically coach Malone is firey, always upbeat, and ferocious in his approach to coaching. During the bubble, he has seemed a bit drained, and less energized than in years past.

What happened to the Micahel Malone that was so bitter over his departure in Sacramento that he now refuses to wear the color purple?

Maybe we are just reading the situation wrong. Perhaps the hysteria of being in a bubble for over a month is getting to him. Perhaps the social issues in the world are on his mind. All of this could be the case, but at the end of the day, coach Malone has failed to prepare his team for the rigor of the NBA playoffs and the intensity that comes with it, and this is not the first time.

Perhaps it’s not his fault. Malone is a seasoned coach, but he’s never advanced past the Conference Semifinals as head honcho. The Nuggets will always be a great regular season team based on their talent alone, but they’ll never come close to capturing a title given their tendency to fade away when it matters most.

The Nuggets have yet to prove they can hang with the best of the best, let alone the Utah Jazz, who are down Bojan Bogdanović.

Remember folks, the Nuggets chose to play the Jazz. They felt they were the superior team. They felt like they had a better chance against Utah as opposed to Dallas. Well, the Nuggets got precisely what they asked for.

Quin Snyder has not only out-coached Malone, he’s exposed the Nuggets as frauds once again atop the Western Conference.