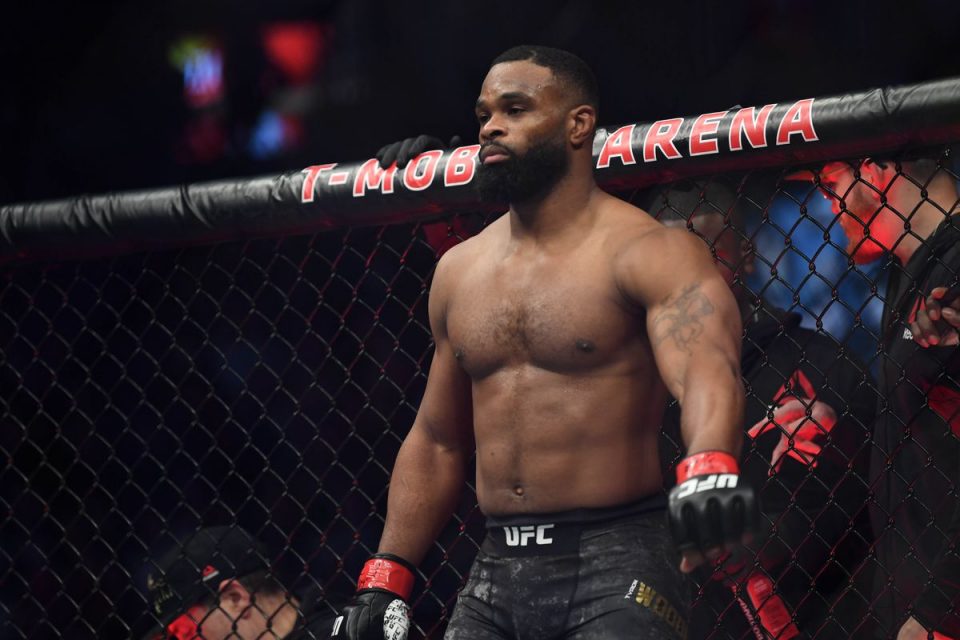 Headlining the main event for the upcoming May 30 UFC showdown is the matchup of Tyron Woodley and Gilbert Burns. These welterweights will square off in Las Vegas, along with the other fights on the card for  that night. Odds provided by BetRiver.com the newest and one of the most reputable sportsbook in Colorado

If you want to bet on these fights and get matched up to $250 by using promo code: 250MATCH with the link below.

The market’s reaction to this fight has all been pretty much the same. The odds for this one are currently sitting at:

Tyron Woodley (19-4-1) will be hard to ignore since he is ranked the best fighter in the welterweight division. He has created a nice resume with seven wins by knockout and five by submission, and he has had four successful title defenses.

“The Chosen One” has his striking accuracy at 48 percent and a grappling accuracy of 38 percent. He delivers 2.64 significant strikes a minute while taking on 3.95. Not too crazy about his ratio here, but he has made it this far.

A key to his success is his takedown defense at 92 percent and a significant strike defense at 57 percent. Woodley has also managed 0.44 takedowns and 0.27 submissions every 15 minutes.

Gilbert Burns (18-3-0) has also put together a winning resume and netted himself a sixth-best fighter in the division. Currently, he is on a four-fight win streak. His winning resume has five wins by knockout and eight by submission.

“Durinho” has a striking accuracy of 44 percent and a grappling accuracy of 39 percent. He delivers 3.22 significant strikes a minute and takes on 3.25. This ratio is a little better to look at and is much better than Woodley’s.

He also has some solid defenses, with a takedown defense at 43 percent and a significant strike defense at 58 percent. Burns has also managed to average 2.60 takedowns and 0.71 submissions every 15 minutes.

Blagoy Ivanov (18-3-0) is ranked 12th in the heavyweight division. His resume is packed with six wins each by knockout, submission, and decision. His striking accuracy is 37 percent, and he has a 100 percent grappling accuracy.

Augusto Sakai (14-1-1) is right behind Ivanov as 13th in the heavyweight division. At the moment, he is on a four-fight win streak and has 10 wins by knockout. His striking accuracy is at 51 percent and, just like his opponent Ivanov, has a grappling accuracy of 100 percent.

Mackenzie Dern’s (7-1-0) fighting resume shows a conservative effort and contains four wins by submission and three by decision. She has a striking accuracy of 33 percent and a grappling accuracy of eight percent.

The fighting resume of Hannah Cifers (10-4-0) shows a little more aggression, with five wins by knockout and five by decision. She has a striking accuracy of 48 percent but does not have anything for a grappling accuracy.

The fighting resume of Roosevelt Roberts (8-1-0) has three wins by knockout, four by submission, and one by decision. His striking accuracy is at 46 percent, but not anything for a grappling accuracy.

Brok Weaver (14-4-0) is in full stride on a seven-fight win streak, including two wins by knockout and three by submission. His striking accuracy is at 56 percent but also has nothing for a grappling accuracy.

Gabriel Green(9-2-0) Green is a Bellator veteran with a 9-2 professional record. He’s won his last six straight bouts, finishing each opponent, and has not tasted defeat since a 2017 loss to current UFC Lightweight Jalin Turner.

Daniel Rodriguez (11-1-0) is on a six-fight win streak with one of those wins coming from a UFC debut. He has a striking accuracy of 41 percent and lands 5.69 significant strikes a minute.

Make sure to check back to Denver Sports Betting for all your UFC news and predictions. We’ll also have coverage of the Denver Nuggets and Colorado Avalanche when their seasons restart, so you can enjoy sports betting in Colorado.

I have to take the odds on Woodley for this UFC main event. I think it’s a safe bet and have to take advantage of sports betting being legal in Denver and Colorado.