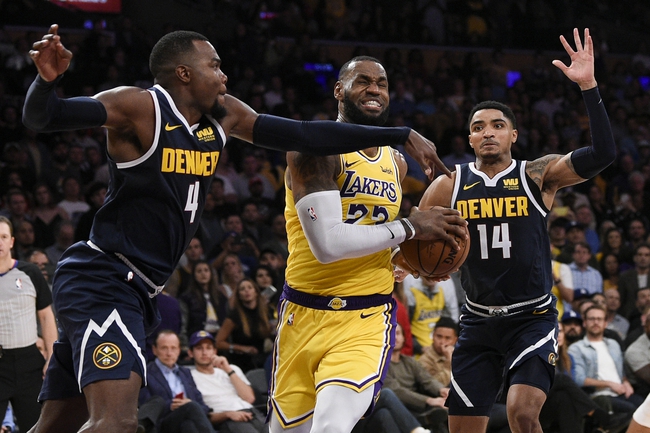 The Denver Nuggets are set to host the Los Angeles Lakers on Wednesday night in what could be a Western Conference Finals preview. Denver has one of the best home-court advantages in the NBA, but this will be a tough test.

Lakers Solid On Both Ends

The Lakers are averaging 114.6 points per game on the offensive end of the floor while allowing just 107.2 points per game on defense. Anthony Davis leads the team with over 26 points and 10 rebounds per game, while LeBron James is in charge of this offense.

The Lakers have a nice mix of veterans and youngsters, but this team is solid.

Nuggets Will Need To Defend

If the Nuggets are going to pull off this upset, they are going to need to play some elite defense in this game. Denver is allowing just 106.4 points per game this season, but it will struggle to defend James and Davis.

The Nuggets will need to shoot it well on offense to keep pace.

The Lakers might be the best team in the Western Conference, but playing in Denver is never an easy task. The Nuggets are going to get enough stops to keep this to a low-scoring game, and they will come away with a victory.

Monkey Knife Fight is the best destination for player prop betting options for this game and other games around the NBA. Be sure to use promo code: DSB50 when signing up to earn an exclusive sign up bonus.

Davis might be averaging over 26 points per game for the Lakers, but he doesn’t have to score that much every night. The best bet is taking the “under” or “less” with that line.

Nikola Jokic needs to have a monster night for the Nuggets to win, and taking the “more” or over is the right play in that scenario.

This is another situation that you need to split your picks. James is going to grab at least eight rebounds in this game for the Lakers.

We already said that Jokic is going to score at least 23 points, which means that Jamal Murray will score “Less” than 20.

We don’t usually recommend doing this, but taking all three of the Nuggets players just seems like the right way to go with this bet. Jokic is going to have a monster game scoring, Monte Morris has been assisting like crazy, and Murray will take more three-point attempts (and make them) than James.

Make sure to check back on Denver Sports Betting for more news on the Nuggets and all your favorite Denver-based teams. We’ll also have the latest news on sports betting coming to Colorado.