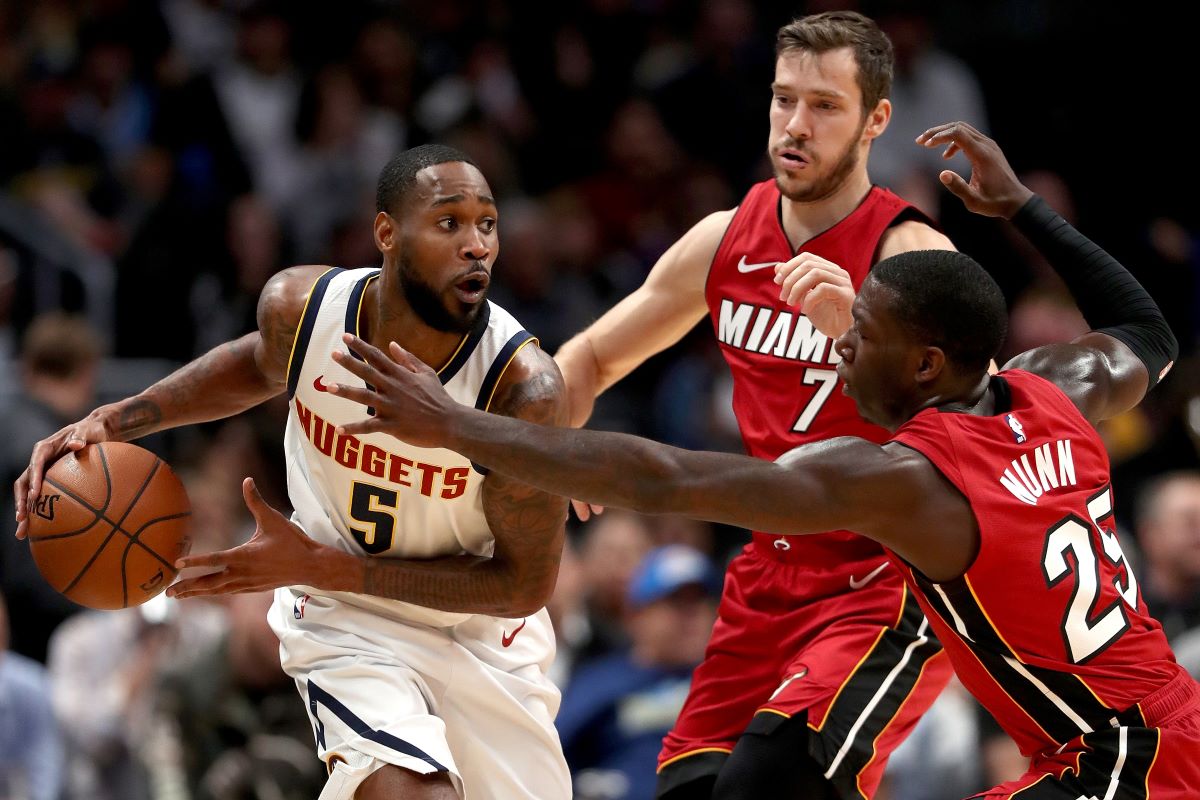 Through seven games, the Denver Nuggets are in the thick of the race to win the Western Conference. At 5-2, Denver is tied for second in the West with the Dallas Mavericks and trailing only the 6-1 Los Angeles Lakers. On Friday night, they welcome the Philadelphia 76ers to the Pepsi Center. The 76ers are also 5-2 and among the favorites to win the Eastern Conference.

Here is a preview for Friday’s marquee matchup, complete with a free pick.

State of the Nuggets

After back-to-back losses, the Nuggets have turned it around, winning their last two — at Orlando and home vs. Miami. On the road, Nikola Jokic had a 20-point, seven-rebound, four-assist showing, and the defense held the Magic to just 87 points and 20 percent shooting from three. Three days later, Will Barton had 15 points and 10 rebounds, and Jamal Murray had a team-high 21 points to comfortably beat the Heat on a rare off-night from Jokic.

The 109 points scored against Miami by Denver on Tuesday was its season high, beating its previous high of 108. Still, the Nuggets have fallen short in every game of the league average in points per game, which is currently at 110.5.

A lot of that is intentional, as the Nuggets have played at the league’s slowest pace (96.7). But they still could make more shots, as they rank in the bottom third in field-goal and three-point percentage.

Murray has stepped up this year as the team’s leading scorer so far, averaging just under 19 points per game. Jokic has averaged just under 15 points per night but has also been held to 13 or fewer points in four of Denver’s seven games. Still, the All-Star big man leads the Nuggets with 9.7 rebounds and 5.9 assists. Barton, Gary Harris, and Paul Millsap are all averaging in double figures as well.

After five straight wins to open up the season, the 76ers dropped their first game of the season in Phoenix on Monday. On Wednesday, they followed it up with a two-point loss in Utah against a tough Jazz team. A big reason for their small speed bump over the last week or so was due to Joel Embiid’s suspension. The star center was suspended for two games for his role in a fight against Timberwolves center Karl-Anthony Towns.

Without Embiid, the Sixers beat the struggling Trail Blazers by a single point and then lost to the Suns. Before the suspension, they were undefeated, winning by an average of 11 points per game. With Embiid now back, the battle between him and Jokic will be a treat to watch.

The Sixers are the anti-Nuggets in the sense that they like to play at a fast tempo, currently playing with the seventh-fastest pace in the league. They’re good from the field thanks to efficient guys like Embiid and Tobias Harris, but lack a consistent three-point shooting threat, ranking 22nd in the league with 33.3 percent from beyond the arc as a team.

They’re a good rebounding team with elite size, as the only player in their starting lineup shorter than 6-8 is swingman Josh Richardson. They also lead the league with 11 steals per game, something the Nuggets will be mindful of as a team that loves to dish the ball around.

In four games, Embiid has averaged 24.3 points and 11.8 rebounds on 46 percent shooting from the field. He is even a threat to shoot from deep occasionally, and will no doubt be the focal point of Philly’s offense once again.

The versatile Harris is averaging just under 20 points a night while pulling in over eight rebounds. Newcomer Al Horford is averaging 17 points as well and, when paired with Embiid, forms one of the scariest frontcourts in basketball. And don’t forget about point guard Ben Simmons, who at 6-10 is an elite playmaker and passer, while also averaging three steals per game, though Simmons is expected to miss this game with a shoulder sprain.

Right now, the Nuggets are opening as a slight favorite against the 76ers at -115. They have the advantage of being at home but also in their depth. Denver is getting 50 percent shooting from three-point range by Barton and is able to trot out a plethora of guards like him. Harris, Torrey Craig, and Malik Beasley are all capable scorers when Murray is on the bench.

If there’s one glaring weakness for the Sixers, it’s their depth off the bench, so Denver will need these players, along with Jerami Grant, Michael Porter Jr., and others to make the most of their time on the court. Harris and Millsap were both hurt in the Nuggets’ win over Miami, but both practiced Thursday and are expected to play in this one.

Overall, this game will be a good test for the Nuggets, as they will play a team with multiple All-Star-caliber players that is strong on both ends of the court and has a big size advantage.

To win, they’ll need depth and for Jokic to find a way to put up points. While both of those things can happen, I don’t know if Denver is ready to match the Philadelphia in terms of pace and offense. I’m picking the 76ers +105 to escape Denver with a win and snap the Nuggets’ two-game winning streak.

Check back to Denver Sports Betting for more news and information on the Nuggets and all your sports betting needs.