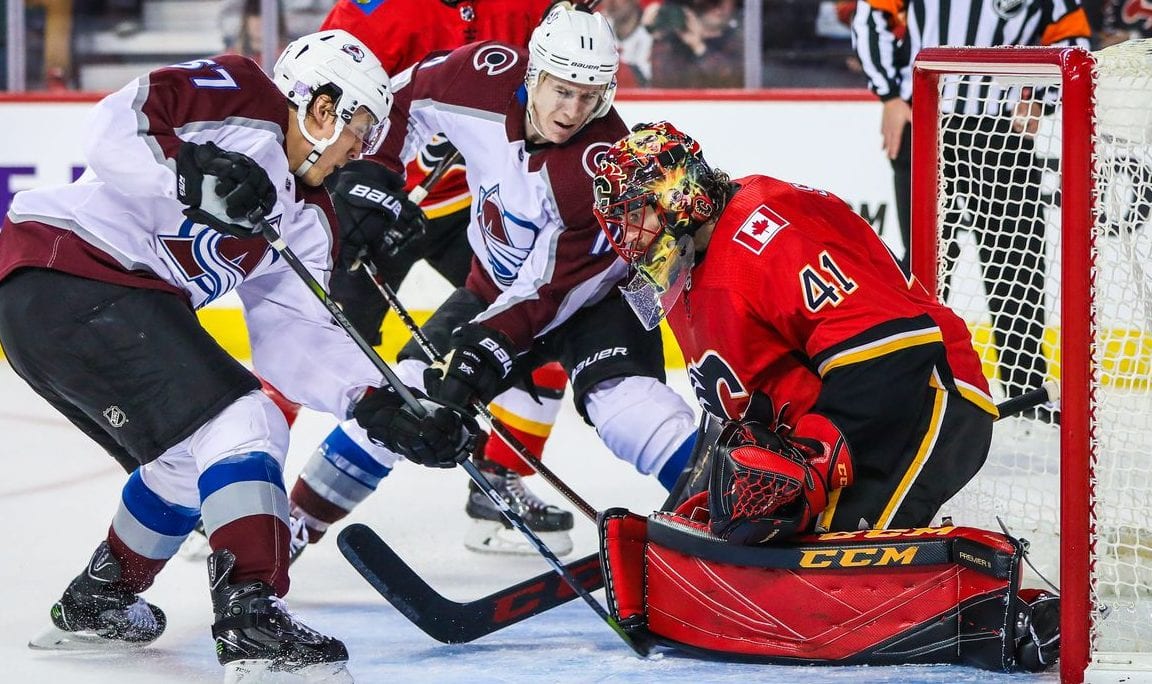 The Colorado Avalanche’s quest for their first Stanley Cup since 2001 begins on Thursday with a rematch from the first round of the 2019 playoffs. The Avs will welcome the Calgary Flames to the Pepsi Center and aim to begin the season with two points in the standings.

Here’s what you need to know to get ready for Thursday’s matchup, including a quick recap of last year’s series between these teams, a closer look at the opponent, the keys for the game, and finally some odds and predictions.

Much like how Colorado won games during the regular season, they beat Calgary in large part due to the trio of Nathan MacKinnon, Mikko Rantanen, and Gabriel Landeskog. The three of them combined for 21 points (nine goals, 12 assists) in the five-game series. Colorado also limited Calgary’s talented trio of Johnny Gaudreau, Sean Monahan, and Elias Lindholm to just five points (two goals, three assists).

After a 107-point regular season and a No. 1 seed in the tough Western Conference last year, the Flames decided not to change a lot of things this offseason. Gaudreau and Monahan, along with rising stars Lindholm and Matthew Tkachuk, lead an offense that was second in the league last season in goals per game.

They had five players eclipse 70 points, including defenseman Mark Giordano, who at age 35 won the Norris Trophy with a 17-goal, 57-assist campaign.

The biggest move the Flames made was moving on from veteran goalie Mike Smith in favor of Cam Talbot. Talbot will compete for starts with David Rittich, who broke onto the scene last year with a record of 27-9-5 and a .911 save percentage. They also completed a one-for-one swap of veteran forwards, acquiring Milan Lucic from the Oilers in exchange for James Neal.

With most of last year’s roster back in place, the Flames are expected to be a playoff team once again. They have an elite group of top-six forwards and top-four defensemen and are able to win games 6-5 or 2-1. Their biggest question marks will be if the Rittich-Talbot tandem is good enough to win them a Cup and if the 36-year old Giordano can still shoulder the load of being a No. 1 defenseman.

Keys for the Game

For Calgary: There are two big things the Flames will be looking to do on Thursday. The first is to shut down Colorado’s top line, something they failed to do last year in the playoffs. They will attempt to force Tyson Jost, Nazem Kadri, and the other secondary scorers to beat them instead, a task easier said than done.

They will also look to take advantage of Colorado’s very young blue line by drawing penalties and converting on the power play. Calgary was second in power-play opportunities last season, only trailing the Avalanche. Regardless, look for the Flames to be aggressive and force the Avs into the penalty box.

For Colorado: You can take Calgary’s first key and apply it easily to the Avalanche. The Flames have a great first line, so Colorado will do its best to neutralize their effectiveness whenever they’re on the ice. I would expect to see the defensively-sound second line of Kadri, Jost and Andre Burakovsky on the ice with Gaudreau and company frequently, alleviating some of the pressure on Colorado’s young group of defensemen.

Another key for the Avalanche will be to win the shots-on-goal battle. Whether Calgary starts Rittich or Talbot, underlying numbers suggest that both of them are average netminders, with Talbot ranking a little below average. Putting pressure on the goaltender with shots from both the crease and the blue line will set the tone early in front of the home crowd in Denver.

As discussed in Colorado’s season preview from a couple of weeks ago, the expectations for the Avalanche this season are very high. So it’s no surprise to see them favored to win their home opener. Currently, the Avs are opening at +126 to win straight up, while Calgary is listed at +178.

The Flames have had an entire offseason to dwell on their collapse against the Avalanche in the postseason, so they will come into the game incredibly motivated. I’ll pick Calgary to steal this game on the road, winning by the final score of 4-2.