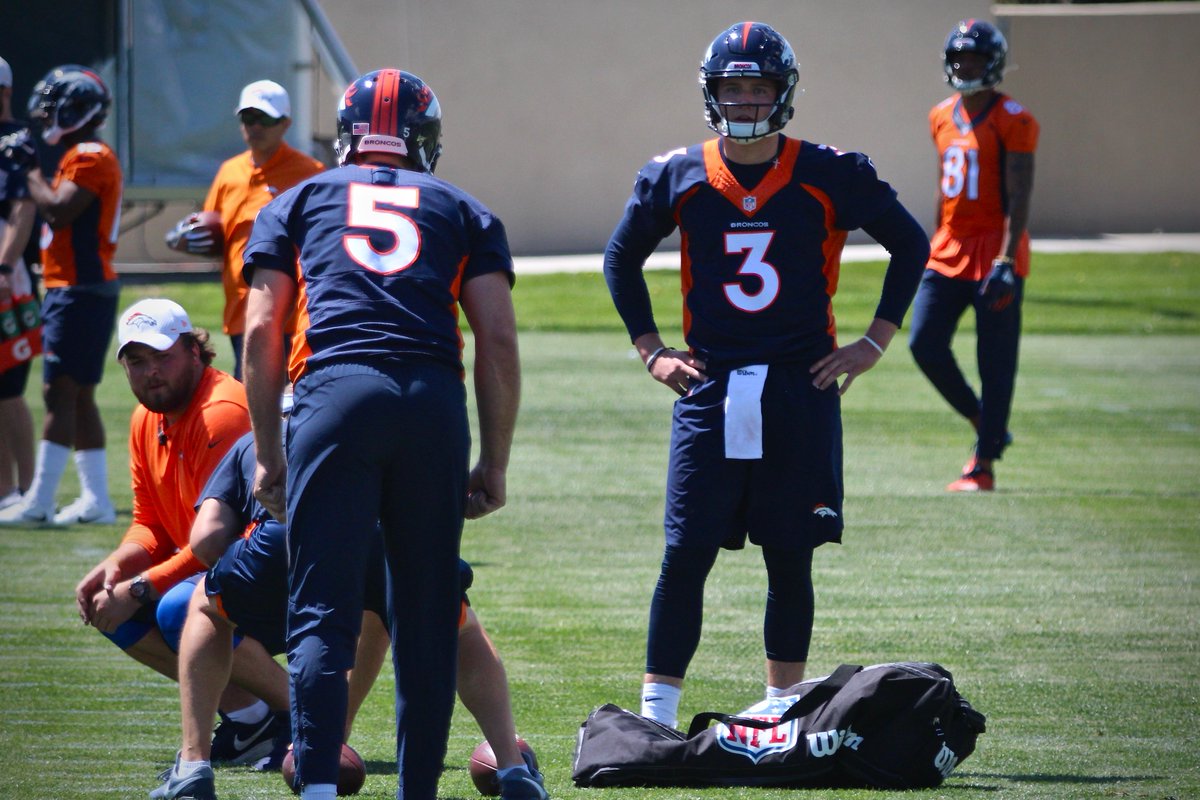 Will the Broncos Improve Upon their 6 – 10 record?

OTAs have begun, and that is the real start of the offseason program for most NFL teams. We get to see the rookies begin their transition into the National Football League, and the majority of the team is able to get together for the first time. Most teams are without a few guys, due to the “optional” notion of these early OTAs, but it still feels like the beginning. It’s never too early to start to analyze what to expect for the upcoming year, and now we know how the team should set up for the most part.

The Broncos have been rather active in free agency, with most of the movement coming early. The signings of Kareem Jackson, Bryce Callahan, and Ja’wuan James are all signings made to sure up some holes that the Broncos had last year, like a poor pass coverage grade. Boosting the offensive line was another priority that was taken care of, which is very important when you look into the rest of the Broncos offseason moves.

Denver traded a 2020 fourth-round pick to Baltimore to get Joe Flacco, and then traded Case Keenum and a seventh-round pick for a 2020 sixth-round pick. This trade is essentially Case Keenum, $4 million, and fourth- and seventh round picks in 2020 for Joe Flacco and a 2020 sixth-round pick. I think this trade is a win on the surface for Denver, due to their current roster. Keenum was really a career backup until making a splash the year before with Minnesota, but Minnesota had Adam Thielen and Stefon Diggs, along with Kyle Rudolph and a really solid roster. After the Demaryius Thomas trade, the Broncos really didn’t have the supporting cast to let Keenum thrive, and I think that they have built their offseason around their transactions, which I really like.

Moving into the draft, the Broncos used the 20th overall pick on Noah Fant, who is a very talented pass-catching tight end. Again, this move aligns with their previous moves.

Fant is not really a blocker, so they sign edge protection in a tackle, and then they go and get a pass-catching tight end. We all know that Flacco has heavily used tight ends throughout his career in Baltimore. Dalton Risner and Drew Lock were both picks in a similar mold as previously stated. Lock is seen as a potential project with real upside and still the ability to start sooner than most players.

He has arm talent and game similar to Flacco in many regards. The last player to expect instant impact from is Dre’Mont Jones, who was a talented DT prospect that jumped up into the late first round on tape with quickness and agility inside, but then tested much more poorly than most expected at the combine, which really tanked his stock in a d-line heavy draft.

When analyzing what to expect from Denver this season, I think that you would be pretty hard-pressed to say that this team made massive changes that should make them look completely different in 2019. This is reflected in the win total of 7 this season. The biggest change may be the opponents that they have to play. The Chiefs may look completely different if they are missing Tyreek Hill and Kareem Hunt. The Chargers are still loaded on both sides of the ball from a weapon standpoint. The Raiders should improve with the addition of multiple early draft picks and Antonio Brown. Overall, the Broncos have the second hardest strength of schedule in the NFL based off of projected win totals, including playing a league-high eight teams projected to be in the top 10.

My lean on this seven-win total is the under because this team will likely run into some rough spots when they play this tough of a schedule. The Broncos play a top 10 team at least every other week until Week 17. That is NOT good, especially with a young QB waiting in the wings after a three-game losing streak. The Broncos are 12-1 to win the AFC West, which is probably a fair number. Again, with the potential loss of Hill and Hunt, I think the Chiefs may fall, but almost all of that fall would go in favor of the Chargers over the Raiders and Broncos.

According to FantasyPros aggregate projections, they have Joe Flacco throwing for 19 TDs and 12 INTs for 3,500 yards, while Drew Lock starts the last game or two and throws two of both. For perspective, Keenum threw for 3,890 yards, 18 TDs, and 15 INTs last season. I would take to over on 3500 yards for Flacco, due to the increased productivity from Courtland Sutton and how he should benefit from both Sutton and Fant in year one. I would lean toward the over in both TDs and INTs as well because Flacco is relatively aggressive when given the chance.

Lindsay is projected for 7 TDs and just under 1,000 yards, which is similar to his 2018 stats. I think this is very fair. Lindsay was great last season, but will likely still see some competition for carries, and I do expect them to be trailing against this tough schedule. Sutton and Sanders are both looking at projections of 700-750 yards, which I find rather reasonable. I love Sutton’s big-play ability with Flacco and Lock throwing to him over Keenum, so I would hit the over on almost all of his projections. Sanders is still the better receiver, but I am curious to see how they use him with Flacco. Sanders is a lower aDOT player than Sutton, which shows in his similar yardage numbers with a projected 15 more catches.